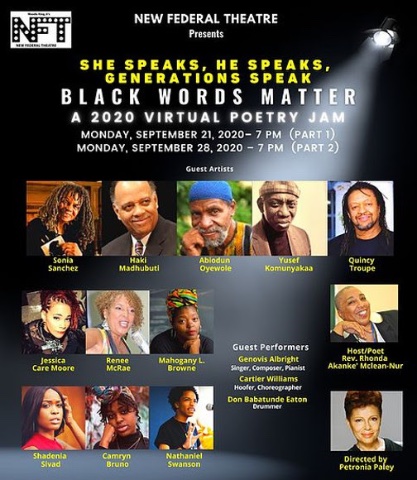 He Says, She Says, Generations Say

Leave it to Woodie King, Jr. mastermind of the now fifty years young New Federal Theatre, to get our new streamed delivery form better than anyone else (Irish Repertory Theater excepted).

For two evenings, starting on September 21-22 and then on September 28-29, the NFT is presenting Poetry Jams.  The first one, hosted by Rev. Rhonda Akanke' McLean-Nur, is a marvel of commonplace images elevated to song. The Reverend at first sees herself as strong black women in history. She admits that neither she nor the Queen of the Nile bear much resemblance to Elizabeth Taylor for starters.

References to a white world surrounding the black one abound in the poetry.  Sonia Sanchez reads the list of honored names at the Underground Railway State Park which celebrates Harriet Tubman. Often we hear Un-I-Den-Ti-Fied. Her lilting voice introduces these anonymous men and women who ran from the South.  Every dream, she tells us, begins with a dreamer. They are now known.

Camryn Bruno uses the imagery of the laundry room, reminiscent of Caroline or Change but stronger, as Bruno takes us through the wash cycles: white wash, bleach, no mixing whites and colors.  Don’t leave wet to hang dry.

Nothing is heavy-handed as the phrases accumulate and help outsiders begin to grasp the pains of the past, still present.

Shadenia Sivad, speaks with a moving plainness about her son, inside her own skin, who is moving with a target on his back, the ever present concern of anyone who has loved and cared for a young black man.

Mahogany L. Browne reminds that we carry the load,  carry, carry, Carrie Weems ( black poet and photographer)  ‘They say you ain’t s’pose to be here, black girl,” but Browne is ever so much here.

"They lied. We tried."  The refrain repeats and a new one is added: "We have the power."  Don Babatunde Eaton shows us the beat when soul got transferred to the feet, and Genoris Albright is featured at the keyboard with Brown Baby.

Director Petronia Paley has just the right sense of the video image. Poets are up close and this makes the audio words seem close too.

Elegant poets from the first generation of presenters include Quincy Troupe. He takes us "back here in the dream of Harlem" and names 7-11, because those numbers always win in dice. His rod-shaped arm is a gene which reaches back over time.

Poetry Jam finds the extraordinary in the ordinary. We are drawn into unfamiliar spaces which we may never inhabit, but for which we must cultivate feeling. Before we know it, in the hands of Shadenia Sivad, Haki Madhubuti and Renee McRae, we feel familiar, even like family. This has always been Woodie King’s gift.

Can't wait until the next Jam on September 28.  Jams available at New Federal Theatre. Hallelujah!