Miller's A View from the Bridge 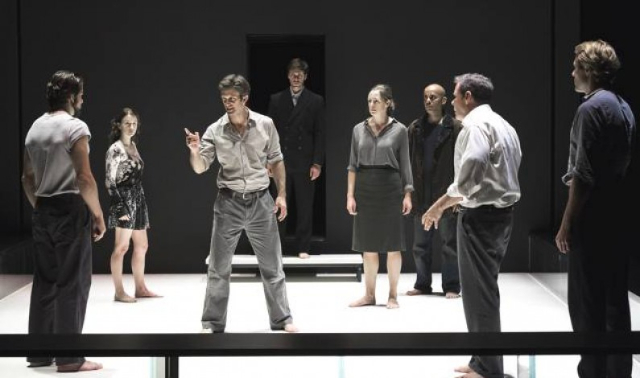 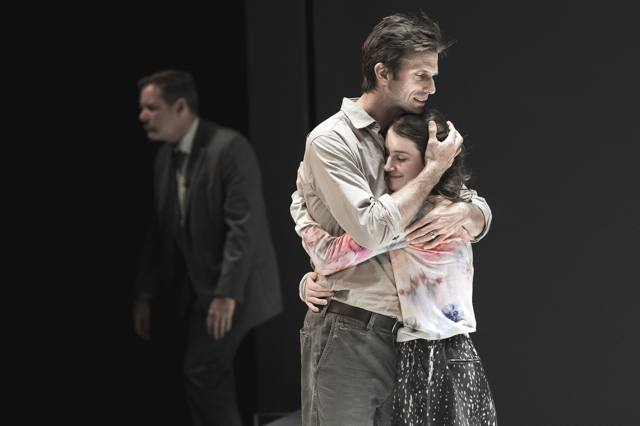 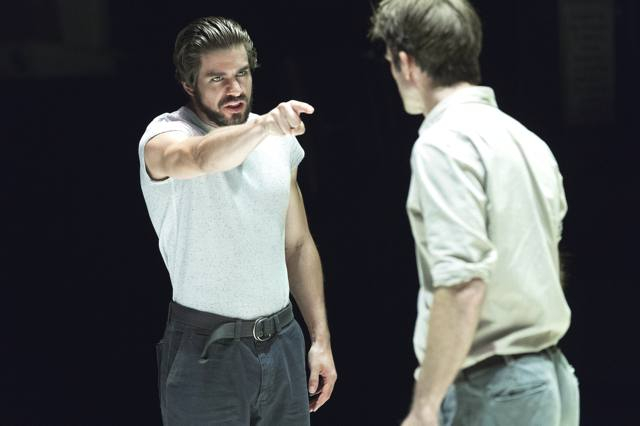 This being an election year, and politics continually being compared to theatre, I guess it’s okay for me to compare and harken back to the 1988 vice-presidential debate where vice-presidential candidate Dan Quayle was comparing his years in Congress to President Kennedy’s years in the Congress. During their debate Senator Benson uttered his scathing remark heard round the world, where at one point in their debate Benson paused and then leaned in. “Senator”, Benson glared at a nervous Quayle, saying “I served (in the military) with Jack Kennedy. You are no Jack Kennedy.”

Hove, is an auteur director with formidable stage credentials. Fresh from his 2015 Olivier Awards London success, which transferred to New York in 2016, winning Tony Awards for Best Revival and Best Director. The production of Miller’s “A View from the Bridge” has transferred once again, this time to Los Angeles and has landed on the stage of the Ahmanson‘s 2000- seat house.

Miller’s 1957 version (he wrote two versions) is a small, intimate but powerful story of Eddie Carbone, a New York dock worker/longshoreman/stevedore, who scratches out a hard scrabble existence in Red Hook, a working class neighborhood in Brooklyn.

The challenge of Von Hove’s reimagined, sparse, character-challenged story is what informs the production, forcing textural changes to be visually updated in its execution to 21st century sensibilities and society. Gone is the naturalistic original set design (which probably needed updating to complement the tone of a slightly altered story from the one Miller wrote back in the 50s).

The new design is awash in glass and floor lighting instruments. No onstage seats, props or furniture. The actor’s either stand or sit on the floor and one gets a feel and the look of a sterile ER hospital waiting room without seats. The actors are working within a box-like rectangular performing area with some audience members seated on stage on opposite sides as if watching a football game with the focus forced into a brightly glowing boxing ring like set.

The rest of the audience is seated all over the 2000-seat theatre. Any nuanced gestures or facial expressions taking place on stage by the first rate cast is an act of faith on the part of the audience. As it’s staged in the round we’re always going to have actors, at times, speaking with their backs to the audience. The Mark Taper Forum, perhaps, would have been a better choice for a play that takes place in one room. But scheduling plays is not one of my strong suits or my job.

The production as envisioned by auteur Van Hove is an actor’s wish come true. It’s all about them (as it should). Eddie Carbone, according to Miller’s stage notes, is a husky, slightly overweight, working class longshoreman. Van Hove’s Eddie is a trim, slightly built, Frederick Weller, an award-winning stage actor who, on opening night didn’t look husky or slightly overweight to me. It’s tough to intimidate as a character when called for by the text when the actor doesn’t have the ‘right look’. The fallback position usually devolves into a lot out shouting to validate the alpha male status.

The story in short, tells the almost Greek-like tragic story of Eddie Carbone (Frederick Weller), his wife Beatrice (Andrus Nichols), and her seventeen year-old niece Catherine (Catherine Combs), the orphaned child of her sister who has been raised from a child in the Carbone household.

Their lives are turned topsy-turvy by the arrival of two male relatives of Beatrice from Sicily. Marco, a taciturn, quiet, illegal immigrant strongly played by Alex Esola and Rodolpho, also an illegal, a young, handsome, blonde Italian nicely portrayed by Dave Register, who is naturally drawn to the young and vivacious Catherine, wholesomely and innocently played by Catherine Combs, that sets Eddie on edge arousing his jealousy and sets in motion the events that lead to a dark and tragic end. If only Beatrice could make Eddie understand his misguided and dangerous emotions concerning Catherine… but she keeps these thoughts to herself.

Helping the audience understand the story threads and how they intersect and a weave a tapestry that contains, jealousy, lust, misguided affection, rage and manslaughter is the narrator/Greek chorus-like character of Alfieri, a world-weary neighborhood lawyer who has seen it all before and knows the ending of the Carbone family story based on the path it’s taking before they do. It’s a key character part and is capably handled by Thomas Jay Ryan.

One aspect of Mr. Van Hove’s direction that puzzles me, however, is why do all of all of the characters perform their roles barefoot; including lawyer Alfieri who picks up his shoes and takes them with him whenever he moves to a different part of the stage setting them down next to him? What part do bare feet play in a longshoreman’s home, including the newly arrived illegal immigrants? All I can think of is that someone must have a foot fetish in this production.

Mr. Van Hove’s creative team have been with him since London and New York. The Scenic and Lighting design is by Van Hove longtime collaborator Jan Versweyveld, as is Costume designer An D’Huys. Sound design is by Tom Gibbons, and the Associate Director is Jeff James.

“A View from the Bridge” performs at the Ahmanson Theatre through October 16, 2016.