God of Carnage at Shakespeare & Company

Fall Show a Barrel of Monkeys 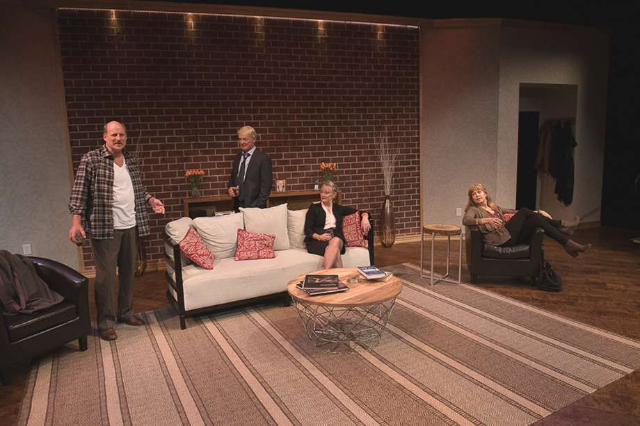 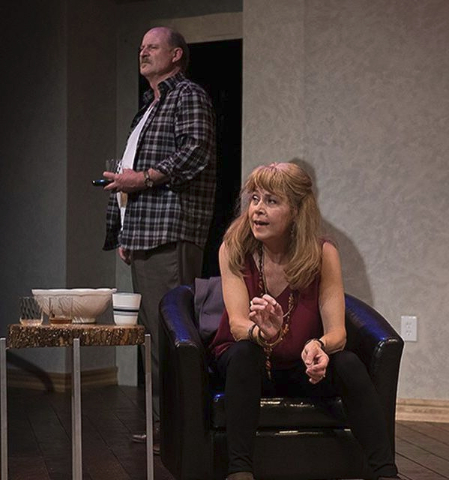 At home with the Novaks Veronica (Elizabeth Aspenlieder) and Michael (Johnathan Croy). 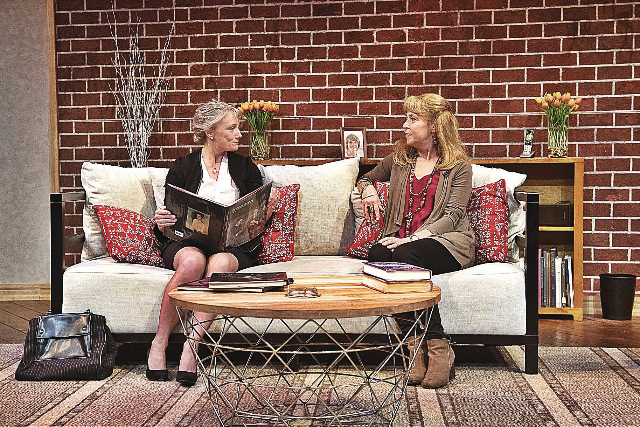 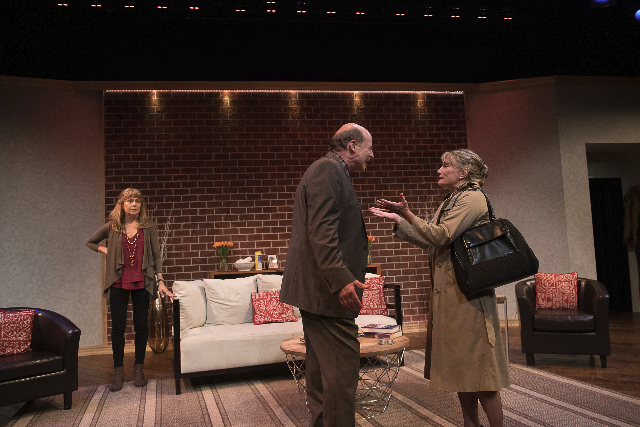 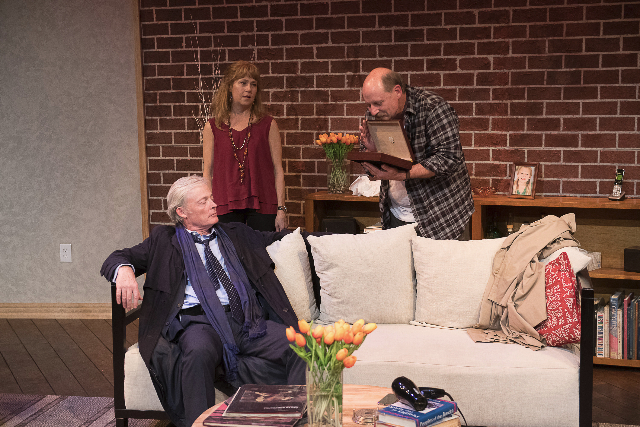 In a rip-snorting, over the top, flat out hilarious production of Yasmina Reza’s God of Carnage, Shakespeare & Company is presenting theatre to die for during fall foliage season in the Berkshires.

Coming home through Lenox last night it seemed odd not to be bucking Tanglewood traffic.  The Shed is now shuttered but S&Co. is demonstrating that there is fun, fun, fun in Lenox after Labor Day.

Given the sold out audience rolling in the aisles such a pity that it ends on October 8. This hilarious boffo hit could easily run through the holidays.

Not exactly flawless, the 2009 Tony winner is challenging and has its detractors. But it is the most produced of the French playwright's seven plays.

In 2010 I saw a replacement cast on Broadway with a Berkshire/ WTF favorite, Dylan Baker as the snotty, putz lawyer Alan. From the original cast Jeff Daniels returned but switched roles to the “Neanderthal” Michael. Lisa Liu made her Broadway debut as Annette and Janet McTeer played the house wife and art historian Veronica.

The late James Gandolfini (Tony Soprano) originated the role of Michael with a confluence of crude, boorish and curiously canny. All four of the original cast were nominated for Tony awards. Marcia Gay Hayden won and Hope Davis was the other actress.

We also saw a Provincetown production.

There is always a sense of hindsight when experiencing a familiar contemporary play. You know what to expect but become involved with the nuances of how the characters interpret their roles.

Ten minutes on, however, we were entirely locked and loaded. The critical game switched from comparisons of other productions to the utter delight of seeing very familiar players taking on a contemporary classic.

As usual Elizabeth Aspenlieder was a comedic beast prowling the stage ready to pounce on every nuance of the action. Even when not playing point her reactions drew us away and echoed the primary development.

Compared to which it took some time for Kristin Wold’s Annette Raleigh to gain momentum. Her character is endowed with a sense of professionalism, icy reserve and patient suffering through a stiff and formal marriage. Her business like costume by Charlotte Palmer-Lane enforced social status and clashes with the glass ceiling.

But when Wold hits her stride, OMG, run for cover as both sharp invective and projectile vomit spew from her mouth. With the bit in her mouth it’s a run for the roses.

In working the comedy the men Jonathan Croy, as a lovable lout Michael, and Allyn Burrows, as the asshole lawyer Alan, are co-dependants. Milking differences they play off man/boy commonality. Typically French the playwright has carved out their sharp contrasts as a social class struggle. Michael is blue collar and uncouth but enjoying the fruits of hard work and success in a plumbing and hardware business. Allyn, a scion of privilege and clout, is a ruthless attorney with a global clientele.

When the shit hits the fan, however, Michael and Allyn duke it out, boys will be boys, with rare rum and an offer of Cuban cigars. By then Michael has stripped off jacket and tie and is on his way to mud wrestling in skivvies. It is met with bemused disdain by Alan who holds out his glass for more demon drink.

There will  be no smoking in the house insists Veronica. Their daughter is asthmatic.

But that didn't stop her from giving the sick child a hamster as Annette zings. Veronica blurts out that her husband got rid of the rodent in the middle of the night. He abandoned it on the curb. For Annette that makes him a pet killer in no position to criticize her son.

If it is a matter of the guys, in a bit of cave man bonding, drinking each other under the table count on Alan to prevail.

What underscores the mayhem is a meeting of parents to discuss and come to an agreement on a brutal incident between their eleven-year-old sons. Benjamin, the child of Annette and Alan, in a school yard fight, has smashed Henry in the mouth with a stick.

The meeting is more about right and wrong, the moral high ground, than who will pay the damages. That’s primarily covered by insurance.

Initially it seems open and shut. Benjamin was the aggressor and Henry the victim. A statement is read over which Alan objects to wording. The parents of Henry would like an apology. But it gets complicated. Was Benjamin justified when called a snitch?  Isn’t Henry also a snitch for accusing his classmate? It seems that Henry heads a gang which his attacker was not allowed to join.

It all starts with strained civility. In the sound design by Amy Altadonna we hear the noise of traffic in an urban neighborhood. The upwardly mobile Novaks take pride in their bourgeois apartment (appointed with a hodge podge  of borrowed furniture in front of a tacky, fake brick wall) designed by Devon Drohan.

In a pretense at decorum there are fresh tulips (a plot point) and Veronica has baked clafoutis a tart, more like a cake. It’s his mother’s recipe but with a secret. Pears are cut thicker, combined with apples so they both bake at the same temperature. Alan, who missed dinner, digs in and takes extra slices. Let them eat cake so it seems.

Michael asks what they would like to drink and then dispatches Veronica to serve them. She reacts with a withering look. That is the first volley of a battle of the sexes and marriages that come apart before our astonished eyes. By the end of the play everyone is ducking for cover.

There are also four characters that play crucial roles but are never seen. There are the boys, of which we learn that Benjamin is a ‘savage.’ Alan is constantly taking calls from a client. It’s big pharma rolling out a drug which is making people sick just two weeks before the annual meeting with stock holders. It’s nasty and reveals every cliché about lawyers. Michael takes calls from his mother who is in the hospital about to undergo knee surgery. It is blurted out that she is taking the drug that Alan is dealing with.

There is a lot going on as civility and decorum escalate into mayhem, gender and class war.

This is all wonderfully concocted by director Regge Life. He lets the cast off the leash and it is a race of thoroughbreds. Directorial  timing is essential and the zinger lines zapped the audience like lasers. There was also hilarious physical comedy and running gags. Life kept the pace fast and furious.

It was evident that the cast was having a blast. There were times when Aspenlieder and Wold were biting their tongues and struggling for control. The humor was so outrageous that they had to fight to stay in character.

God of Carnage evoked more laughs per minute than any play we have seen in a heck of a long time.