The Rembrandt at Steppenwolf Theatre

Charming Morsel of a Play by Jessica Dickey 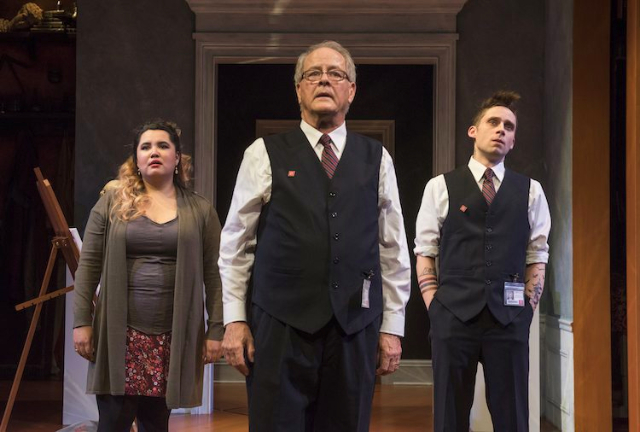 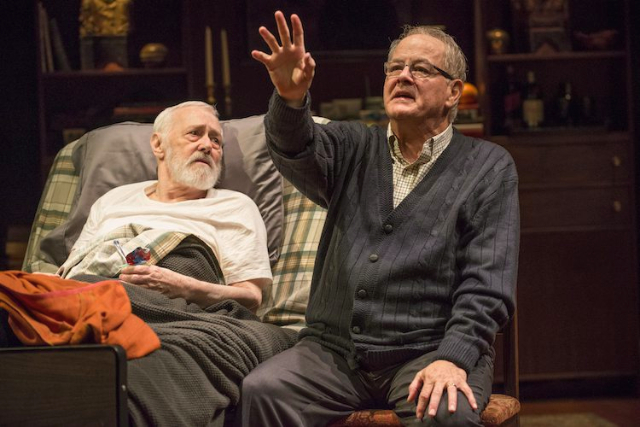 The Rembrandt slips back and forth in time from a contemporary art museum to a Renaissance-era artist’s studio, a Greek temple, and the room where an aging poet is dying. All this happens within the 90-minute scope of the play. The new Steppenwolf Theatre production by Jessica Dickey is a charming morsel of a play with a bit of sorrow and a nod to death.

The story begins with a new day at the museum. Henry (Guinan), a veteran guard, is training Dodger in his new job. Dodger and Madeline tempt Henry (who is worrying about his dying partner, Simon, a poet) to actually touch a Rembrandt and that action sets off a series of reactions. We meet Rembrandt himself deciding how to paint that picture—Rembrandt with a Bust of Homer. And Homer himself appears (Mahoney) ranting about the writing and reading of poetry.

“Don’t write the damn thing down…. If it’s written down, then someone can sit and read it by themselves and that’s a terrible idea. They won’t understand it…. I know a few things about poetry and it’s meant to be heard.”

The finale is a sweet scene with the two partners—the dying poet and the museum guard—eating pudding together in the poet’s sickroom. Simon asks, “How was your day at the House of Dead White Men?” Henry admits that he touched the painting. Later, Henry says, a painting “is such a slight thing—canvas, paint—and yet it contains—what? Worlds. Truths. I stood there today and I thought, There is only one of this—in all of time.”

The two contemporary scenes work the best. The Rembrandt-in-his-studio scene has some awkward moments and Homer-at-the-temple seems added just to tie Homer to the play. It’s not connected to the narrative.

Playwright Dickey says she became interested in museum guards as a subculture and interviewed some of them while writing this play.

Dickey points out that Rembrandt often painted with only four colors: red, black, white and ochre. Each scene in the play is tied to one of those colors. The Rembrandt (originally titled The Guard) was commissioned and produced by Ford’s Theatre in Washington DC.  Dickey’s other plays include The Amish Project, Charles Ives Take Me Home and Row after Row. She is a member of New Dramatists.