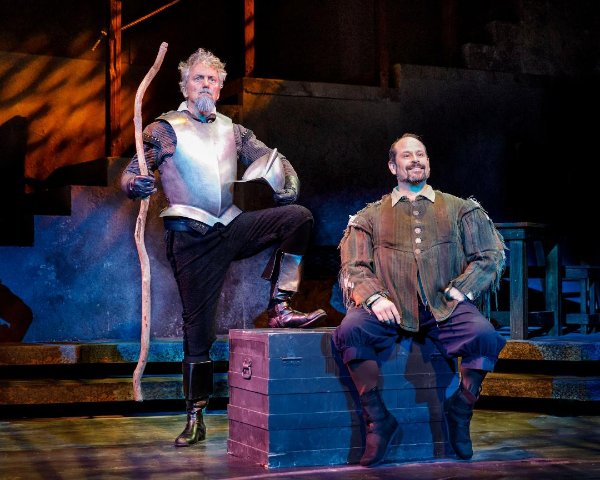 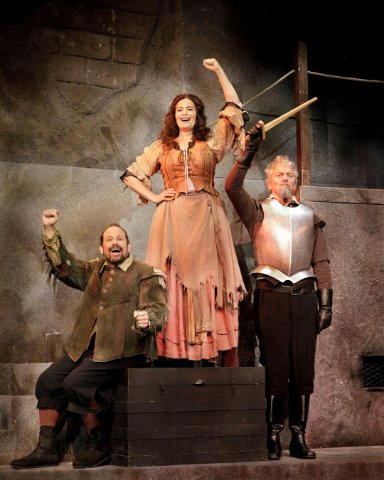 This isn't how your grandparents experienced Man of La Mancha.

For instance, when we walk into the theater, there is no curtain. Rather, the set and the performers are not only in full view, but the actors are fully in character. Specifically, they’re prisoners in a 16th century dungeon in Spain during the Spanish Inquisition.

Some of these ruffians and lowlifes slap down playing cards as they wile away the time.

Meanwhile, another merely lies on the floor.

Soon, a fight breaks out among some inmates.

More cordially, others mingle with audience members in the front row.

It’s almost as though we’re occupying the dungeon with them. Perhaps, we're prisoners of our own apathy and inaction in the face of evil ruining our own world.

Clearly, director Bruce Linser wants to fully immerse us in a troubled time that is sadly similar to 2019.

To that end, Linser apparently doesn’t want us merely to sit back and enjoy a musical. Sure, that might be partly his goal. But he also wants to jolt us out of complacency, force us to re-think preconceived notions and truly understand how Man of La Mancha bears a frightening resemblance to 2019 America.

Linser has dispensed with formalities we usually expect before a show.

There’s no overture or pre-curtain speech, for instance. In fact, the production, which runs through Sunday at the Kravis Center in West Palm Beach, begins without warning. Also, Linser places emphasis on the dark prison scenes, perhaps more so than in other productions.

Foreboding sound effects accompany these moments. A hooded prison guard whisks a prisoner away without warning.

To be sure, you’ll likely applaud until your hands redden following actor Michael McKenzie’s wonderful rendition of “The Quest” (“The Impossible Dream).” However, McKenzie isn’t merely tilting his head back and singing a glorious song simply to demonstrate deft vocals. Rather, he imbues each and every word with meaning and feeling.

In fact, this production possesses the feel of a chamber musical. Singing sounds as natural as breathing and talking.  Moreover, segues from spoken words to songs occur with the ease of getting in and out of a shower.

And rather than a big, splashy sound from a live band, softer sounds emanate from the orchestra area.

As a matter of fact, that area extends to the stage, where a guitarist often is the main instrumentalist. While the singing is robust, the performers place more emphasis on meaning and expression than belting. In short, they’re not merely singing songs – they’re acting them out, complete with expressive, muscular vocals and gestures. The performers don’t appear to wear microphones, but it doesn’t matter. Their sound, and the sound throughout the show, is refreshingly clear, thanks in part to sound designer Richard Szczublewski.

In addition to the pre-performance immersive experience, the Brechtian elements continue during the show. For example, when the “mad” knight Don Quixote insists that a barber’s shaving basin is actually the “Golden Helmet of Mambrino,” one of the characters, in an aside, whispers to us, “what golden helmet?”

Again, the goal of these fourth-wall breaking moments is to lessen the illusion that we’re an audience watching a play, separated from the on-stage world and action. This technique forces us to ponder how our world, aka 2019, is eerily similar to 16th century Spain and the Spanish Inquisition.

Indeed, passages such as the following, which receive the proper emphasis in this production, seem just as fitting for our time: When life itself seems lunatic, who knows where madness lies? Perhaps to be  too practical is madness. To surrender dreams—this may be madness. Too much sanity may be  madness—and maddest of all: to see life as it is, and not as it should be!"

So, is country squire Alonso Quijano, who thinks he’s a Knight errant named Don Quixote de La Mancha, the “insane” one? Or are those shackled by their failure to dream, to see beyond surface reality and to fight for a better world the ones who are truly crazy? Director Linser and Dale Wasserman, who wrote the book for the musical, wish us to consider such questions.

Speaking of Wasserman, he based his musical on a television show, not the classic book by Spanish novelist, poet and playwright Miguel de Cervantes. However, Cervantes and his book play prominent roles in Man of La Mancha. It uses a play-within-a-play format.

To be more specific, in the musical, Spanish Inquisition officials have thrown Cervantes in prison for a financial crime against the Catholic Church.

Still, before he faces the Inquisition, his fellow prisoners put him on “trial.” In particular, they threaten to confiscate pages of what will become his classic novel, “The Ingenious Gentleman Don Quixote of La Mancha” (or just “Don Quixote”).

Naturally, an artist protects his creations as though they’re his children. And so, Cervantes presents a defense as to why his fellow inmates should not confiscate the manuscript. Specifically, his defense comes in the form of a play, through which he and the prisoners will act out the story.

The prison scenes alternate with those during which the prisoners act out Cervantes' tale.

During the play-within-the-play, we hear such well-known songs as the rousing title song, aka “I, Don Quixote” as well as perhaps the show’s most well-known number. That is, the stately and glorious “The Quest” (aka “The Impossible Dream.”)

But even while the prisoners act out the play, the dungeon set remains on-stage. Linser has opted for a mostly minimalist production. It’s one in which there are no scene changes to reflect locations included in the play within the play. Non-realistic lighting by Clifford Spulock deepens emphasis and mood during scenes in which the prisoners act out Cervantes’ story.

Leaving the set of the dungeon onstage throughout is one way the director emphasizes the torturous world of the Spanish Inquisition. Indeed, at least one of these characters is locked up merely for a “crime” against the Catholic Church. The dungeon’s constant presence on-stage reminds us of the dark time surrounding 16th century Spain.

As far as the set itself, designed by Dustin Hamilton, the walls are gray, dusty, jagged and angled downward. Above the wall, which doesn’t extend all the way to the ceiling, is mere blackness. All of this reinforces a bleak, severe and chaotic atmosphere. In fact, the main part of the set, the one most visible to us, is the prison’s common room. If you look upstairs, you’ll find a couple of dark, narrow cells cordoned off with bars. Guards, some of them hooded, enter and exit from an unseen upstairs room.

Meanwhile, props, set pieces and makeup for the play within the play remain in a trunk until the performers need them. This helps explain the fact that, in Linser’s vision, guards captured Cervantes, a theater artist, while he was traveling with a troupe.

If you look at promotional material of Man of La Mancha, there’s a good chance it includes a caricature of Don Quixote. Most likely, the artist renders him as a gaunt, bony figure. Also, his large eyes may seem exaggeratedly large.

But while McKenzie’s eyes are intense and widened, he plays Quixote without the slightest hint of caricature. Consider that at one point, his fellow prisoners “charge” him with being a poet, an idealist and an honest man.

Speaking of idealism and honesty, they are traits with which McKenzie imbues the knight errant. Radiance and charm lights up his face and voice when, for instance, he looks at Aldonza. She is a serving woman and part-time prostitute at an inn.

To be sure, this knight errant can thunder in rage and vehemence when he considers the world’s injustices. But there’s a polished grace, kindliness and sense of honor about Quixote that endear us to him. And, of course, we strongly sympathize with him when a trick meant to shock him out of his “madness” literally brings him to the ground, sobbing strongly and convincingly. Further, our hearts break at the end. That is when a pale-as-a-ghost Quixote, near death, lie in a bed, staring vacantly ahead.

McKenzie, who also plays Cervantes as a modest yet protective artist, isn’t the only strong performer in MNM’s cast.

For instance, an animated Mark Kirschenbaum lends the squire, Sancho, unending optimism, loyalty and obedience. Also, Matthew Korinko endows Dr. Carrasco and the Duke with an uncompromising severity and intensity. This is especially true when Carrasco shoves a mirror in Quixote’s face, loudly demanding that the “knight” admit he’s really country squire Alonso Quijana, and that he view his surroundings as they really are.

One of those “surroundings” is Aldonza, a serving woman and part-time prostitute at an inn. The knight errant looks beyond her lowliness. Instead, he sees a lovely lady he calls “Dulcinea.” Yet, Aldonza claims she’s little more than common filth.

Anna Lise Jensen deftly conveys disgust and exasperation at the knight errant. In particular, she strongly denounces him while singing about her pathetic background during the intensely bleak song, “Aldonza.” But toward the end of the show, Jensen also deftly demonstrates how moved Aldonza becomes at Quixote's vision of her.

Certainly, Quijano might annoy and even anger some. After all, he keeps insisting he’s a knight, that windmills are giants and that a commoner is an elegant lady. Yet, without a doubt, this idealist is someone we sorely need in today’s ruptured world. Indeed, we need someone with a strong desire to right wrongs, fight for justice, see potential in others and be kind to them.

In short, we need such a person to dream of a vastly improved world – however impossible and out-of-reach that dream may seem today.

Man of La Mancha, and MNM’s production of it, fills us with hope that such a person is out there – and will succeed, with our help.