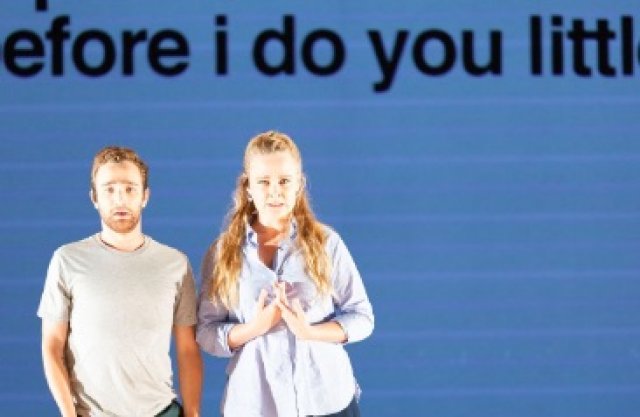 Denis and Katya at the O19 Festival in Philadelphia 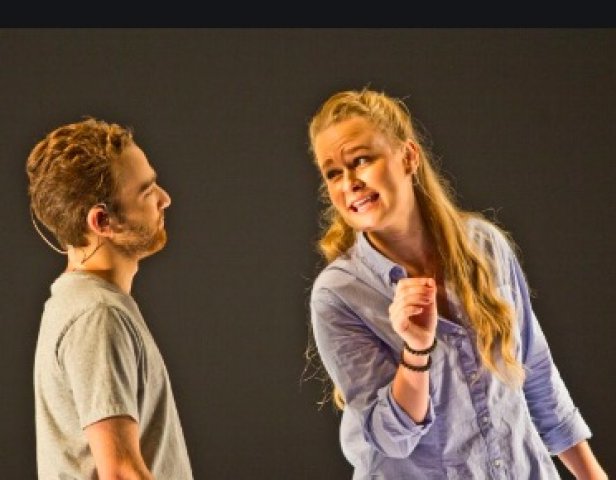 Herford and Edmonds as Romeo and Juliet? 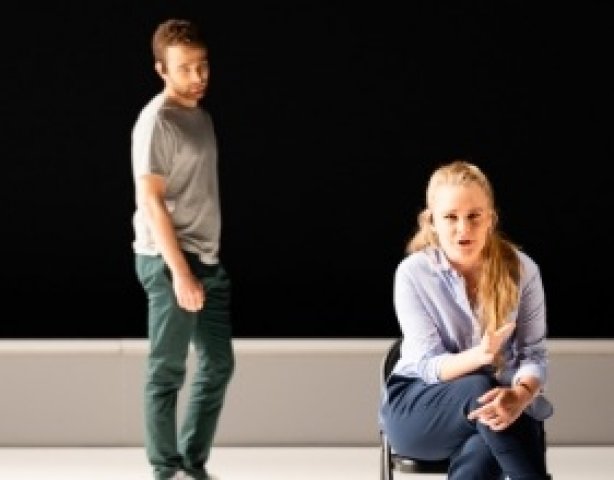 Emily Edmonds and Johnny Herford, The Journalist, The Friend, The Neighbor, The Teenager, The Teacher, The Medic

Opera Philadelphia presents Denis  and Katya, the world premiere of a new opera by Philip Venables and Ted Huffman.  Keenia Ravvinia is credited both with creative contributions and translation of the events surrounding the death of two fifteen-year-old Russians. The teens had holed up in a cabin where weapons were stored and used them to attack the police.  No one really knows what happened. It was an event that was covered in selfies by the young couple on smart phone videos and periscope posts and then widely picked up by the media.

What is a story, the opera asks?  Opera has always tackled this question, using every device available to tell a tale. The tools available to a composer today have expanded to include instant pictures, texts and videos.  The story of Denis and Katya is told not only by the human voice, speaking and singing, but also by human beings, posting texts and videos.

The new methods make this story more complicated and richer.  In fact, in Denis and Katya, we do not know what is real and what is not.  Often today this confusion abounds, not only in fictional story telling, but in press reporting of main events.  Denis and Katya may be Romeo and Juliet, in love and dead by accident at the conclusion.  Yet we don’t really know what happened, even though we have had many continuous reports for the opera’s duration.

Multiple roles were sung by two Opera Philadelphia debutants.  Emily Edmonds is an acting mezzo soprano who not only sings richly but delivers her lines with just the right rhythms and cadences.  Johnny Herford, baritone, slips easily between his beautifully wrought singing lines to the spoken words of his various roles.

Each character is introduced by a title on screen.  Sometimes they sing. At others they speak.  And often they text. The words come out as their own special beeps, another musical line.

The instrumental music was performed by four cellos and electronic accompaniments.  It was dramatic and effective, building from spare beginnings to a rush of frightened and thick sounds at the end. The intensity of the cabin stand off and its reporting by a journalist and various friends does not intensify.  Rather it contrasts with the instrumental music.  Is music the last bastion of humanity in our high tech world?

In the beginning was the word.  In our day, it comes at us in unimaginable forms.  They are used as music in Denis and Katya.  When words are sung and love speaks they can be lovely.  The horror of the shootings is evoked by the strings. Words by comparison are flat.  We can’t help, however, getting caught up in the confusion, the hate.

Typical teenagers sense that bad things may happen in the world, but never to them.  It is doubtful that Romeo and Juliet’s message is instructive.  We are not in a position to howl at the moon and shake teens into their senses. They have their own special feeling of inviolability.  We become so obsessed with trying to figure out what is and is not real, that we lose all sense of reality.  We become complicitous.

Screen titles tell us who is speaking, yet we are not always sure.  This may be intentional, for in the very similar flatness of both the journalist's and the friend's delivery, there is an inhuman response to a dire situation.  The cello music is the human element here. In the end, although a journalist reports the colors of a cabin room, we have no sense of the color of these lives.  Were shots fired, or were they just reported to be fired?

Romeo and Juliet these two may be, both dead at the end.  We never had a chance to feel their attraction to one another, except each dyed their own hair the other’s color.  If the lovers are not dead, we may think of them living in the Gulag after a stimulating and surprising afternoon.