'A Second Helping of Life'

A Benefit with a Cause 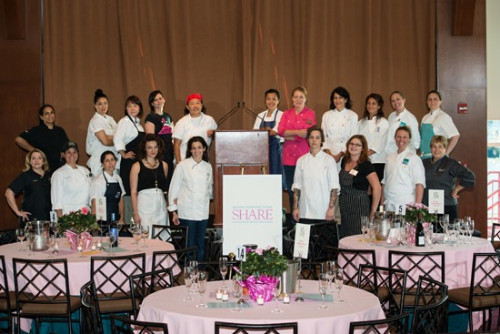 My wife runs a ‘prayer circle’ for those friends or friends of friends who need encouragement during their long journey with cancer and other illnesses. Many of her acquaintances have survived breast or ovarian cancer.

There is an organization, SHARE, that raises awareness for women affected by breast and ovarian cancer. To survive financially, SHARE sponsors a benefit each year, titled, ‘A Second Helping of Life’. The benefit includes participating and celebrity chefs, an auction led by Nicholas D. Lowry of Swann Auction Galleries (NYC) and awards to honorees, Marcia Godosky, Dr. Aye Moe Thu Ma and Karen Orczyk.

This years ‘benefit’ took place in Manhattan on Monday, September 21st at Pier 60 /Chelsea Piers. The money raised from the event helps SHARE to meet their goals. The culinary end of the benefit features prominent chefs who are women.

April Bloomfield of The Spotted Pig and The Breslin fame acts as the event’s executive Chef.

Participating chefs from local restaurants volunteer and include, a list of ‘Whose Who’ of the culinary world.

Add 28 Celebrity Sous Chefs to the list above and you have a roomful of high caliber cooks.

Pat Battle, co-anchor of Weekend Today and a cancer survivor was the emcee for the event. Her upbeat style and positive attitude helped make the event a success.

SHARE is a 39 year old ‘survivor’ led organization that provides support, information and resources to women affected by breast or ovarian cancer. Its ‘Mission’ is to help women and their families address the emotional and practical issues that arise from a cancer diagnosis and to provide the support these women need to feel less isolated, better informed and more empowered as health care consumers. Each year, more than 32,000 people are touched by the SHARE program.

The funds raised by ‘A Second Helping of Life’, from the event enables SHARE to provide free support services and educational programs to thousands of women and families.

In its 12th year, nearly four million dollars has been raised at the event.

These diseases affect everyone.