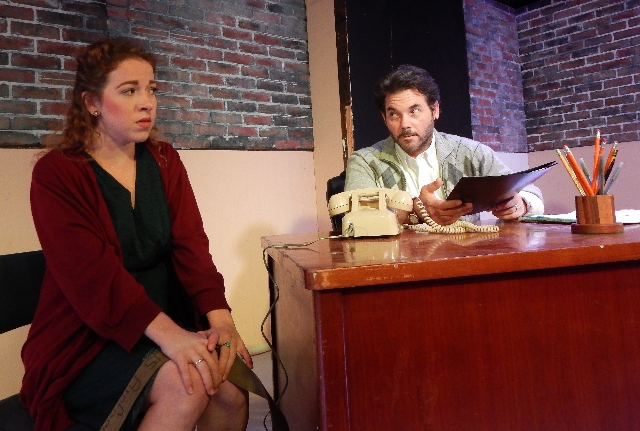 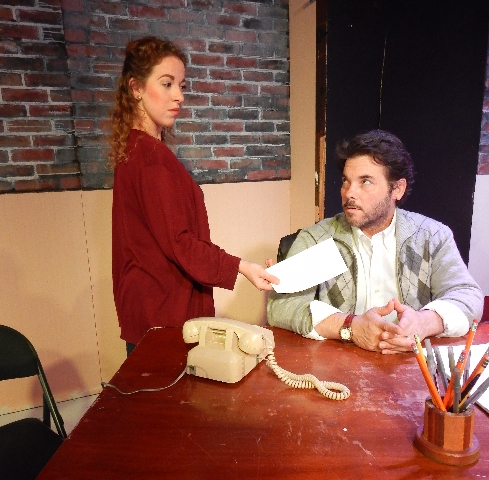 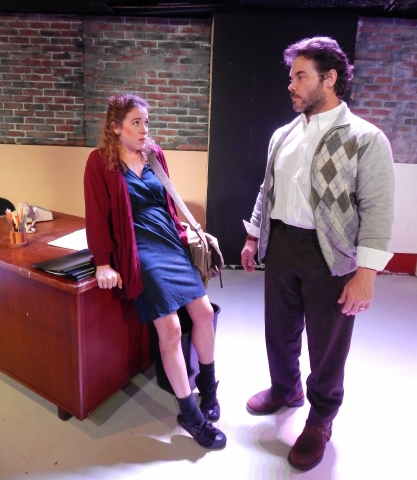 Depending on your point of view, and how it’s directed and acted, David Mamet’s scorcher of a play, Oleanna, is either: A work about political correctness on steroids and the fall of an Arthur Miller-like “Common Man,” or a tale about a vulnerable, seemingly-depressed female student battered and bruised by a narcissistic, power-hungry male professor.

Under Rosalie Grant’s sensitive direction, Todd Bruno plays the academic with a placid and patient air -- growing gradually, almost unnoticeably in frustration until he explodes with rage at the end.

Bruno’s John is the type of professor who knows his students by name and welcomes them into his office before, during and after hours.

In this production, played in the extremely intimate Sol Theatre, John is your average working American who’s just about to realize the American Dream. The person standing in his way is Carol, who claims to be failing John’s course and proceeds to his office to seek his help.

John seems ready and willing to help, despite constant calls regarding the new house he’s buying near the university in anticipation of his expected tenure.

But Carol has a way of twisting and turning words and actions to the point that makes John seem like a serial sexual harasser of women – or worse. It appears as though every move, every word, every gesture by John, however supposedly innocuous, is under intense scrutiny by Carol. She appears to be trying to find the slightest reason to brand John as a dangerous predator of women – one who can’t stand it when women gain the slightest ounce of power.

After watching Sara Elizabeth Grant’s superb portrayal of Carol, it’s hard to label the young woman. Grant invests her performance with endless nuances. The actress, who disappears into the role with apparent effortlessness, makes Carol, at appropriate times, depressed, suspicious, wary, sly, antsy, confident, assertive, depressed, sarcastically amused and flustered, among other well-portrayed emotions. It amounts to acting at its finest and turns Carol into an enigma.

When John’s on the phone at the beginning of the play, Grant’s Carol is curious, deep in thought and freely walking about the office, not the least bit shy – even picking up one of the books from a shelf and perusing it. Another moment, a red-faced, obviously depressed, flustered and bitter Carol is tentative, scared and from the looks of her, ready to bury her face in her arms and let tears flow. The manner in which she shoots accusatory glances at John, her face still crimson, might lead you to believe that this man killed her entire family – and she’s looking at him during the penalty phase of his trial.

Grant’s Carol comes across as unpredictable as Abigail Williams in Miller’s The Crucible. There’s even a hint of a “witch hunt” in Oleanna, which is the title of a Norwegian folk song criticizing a vision of a perfect society in America.

Carol has joined an unspecified “group” on campus to back up her claim that John sexually harassed her during her session with him in his office. Mamet doesn’t specify the name of a university, college, or even a city in which the action takes place. Perhaps that is an effort to reinforce the notion that themes and ideas such as political correctness, the male or privileged-dominated hierarchy at a college/university, the necessity of testing students, the value of higher education, the gulf between success experienced by men as opposed to women as well as the “haves” and “have nots” are all timely and timeless.

Mamet might deny it, but it’s likely no accident that the play is set in the early 1990s. In fact, this production nearly marks the 26th anniversary (October, 1991) of Anita Hill’s accusation that now Supreme Court Justice Clarence Thomas sexually harassed her repeatedly.

While that particular case might not occupy the spotlight anymore, more recent accusations by numerous women that Bill Cosby sexually harassed them are in the public’s consciousness. Of course, alleged incidents of sexual harassment by priests against children seem to crop up every now and then. And then there is the president and his reported history of disparaging women.

This, of course, is also a time when the country is more divisive and tense than it’s been in any recent memory.

It all adds up to a ripe time to stage a thought- and discussion-provoking, incendiary and searing play such as Oleanna. It’s a meaty work for one lasting just about 80 minutes, but never feels jumbled. It’s neatly organized into three acts: The meeting in which Carol enters John’s office for help; the subsequent meeting after which Carol has leveled charges during which John tries to defend himself, and the final meeting, when John has called Carol into his office and the unexpected is revealed. It’s a stretch to believe she willingly complied, given the development, which won’t be revealed here.

That shocking, gasp-inducing moment, during the reviewed performance, featured at least one audience member saying aloud what they thought had happened.

Oleanna contains Mamet’s signature style of dialogue critics and scholars have dubbed “Mamet Speak” – staccato-like, fast exchanges during which characters interrupt each other, complete each other’s sentences, and trail off while speaking. There are also pauses, moments of hesitancy and Mamet stresses certain words.

The Seattle Repertory Theatre, on its website, referred to Mamet speak “profane poetry,” and there is a musicality to it.

Bruno, as John, and Grant, as Carol, nail this style of language, which adds to the tension of the proceedings. The constant ringing of the office telephone further frays Carol’s nerves. It could reinforce Carol’s feelings that she, and women in general, don’t matter in a society dominated by male success.

There are other symbolic elements in this production.

Set designer Ardean Landhuis, who also constructed it, has created a realistic-looking office that seems like a hermetically sealed space. Except for an opening above a door, one cannot see outside the office. Two windows are boarded up with what resembles tape. The backdrop is a red brick wall – symbolizing, perhaps, John’s sturdy fortress – he’s all but secured the American dream, with the tenure committee all but signing the papers. He’s secure in his job, in his own office and he’s bought a new home and can provide for his family. Then in walks Carol and slowly but surely, she demolishes that “fortress” with her accusations and insinuations. Landhuis’ design also suggests a claustrophobic room with no escape – not just for Carol but John, who cannot get away from the charges brought by this “vicious little bitch,” as he calls her at the end.

Costume designer Myria Jean Baum’s clothes are character-appropriate and suggest moments of vulnerability – such as when Carol’s blouse is open to reveal more of her neck and chest. By the end, a flustered John is no longer wearing a tucked in shirt and jacket, but an untucked dress shirt. He looks weary and his hair is a bit mussed.

The shocking ending upends both characters’ lives. It will leave you deep in thought, wondering who (or what) is ultimately most responsible for creating this mess.

How to clean it up may also enter your mind.