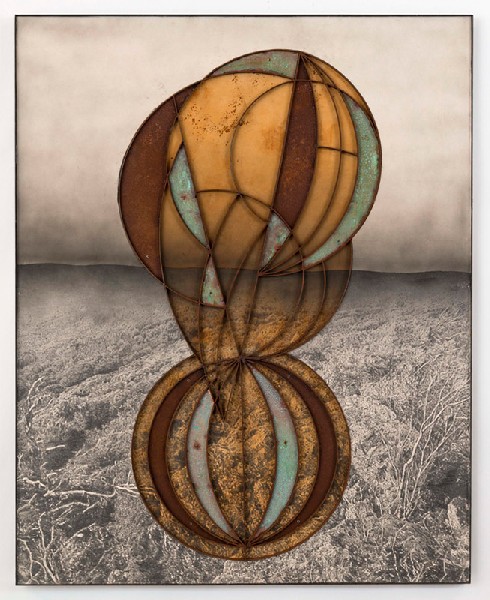 Michael Brown presents a discourse about the machine, history, and nostalgia in his first solo exhibition at Mike Weiss Gallery. Employing both sculpture and drawing, Schematics and Silhouettes reexamines the relationship between the infinite and the self-contained, with a clear rhetoric pulled from America’s westward expansion, our industrial past, and the conceptual work of Buckminster Fuller.

Leaving behind sleek stainless steel in favor of rusted steel and oxidized copper, Brown subjects the mechanical materials to the marks of time and decay. Living in Long Beach, Brown was displaced by Hurricane Sandy. The disaster solidified an interest in how nature and civilization interact, leading Brown to develop a body of work in which industry and nature work in tandem.

Within the gallery, bulbous, skeletal forms mark the floor like nautical beacons. The aged quality of the work results in the feeling that the works are remnants of history, forgotten idols of the golden ages of railroad, American industry, and the Wild West. Their light framework is interjected with scraps of metal and richly patinated copper panels. Despite their intricate detailing, the works maintain a clean, minimalist expression. The artist stated that steel is “a modest and strong” material. These claims could also be applied to the sculptures themselves. Their hand hewn aesthetic and fluid line gives an airy, dynamic quality to the serious, solemn material. The steel itself loses it’s cold, hardened edge through the oxidation of the material. Though modest in size, they speak to a grander scale.

The concept of vastness is heightened due to the accompanying drawings that hang from the walls. The drawings or “prototypes” as they as referred to, place the sculptures in a grander dialogue, as the sculptures are models for vast projects reminiscent in scale of the work of Buckminster Fuller. These seemingly two-dimensional objects are actually three-dimensional wall-mounted tableaus.

Photo-real graphite illustrations of classic American western landscapes, taken from the National Park Archives, are inlaid with circular patterns of steel and copper that reflect the sculptures. Up close, their two-dimensional form morphs into layers, lines—almost pushing the drawings into the realm of sculpture. Vast, untamed swaths of American landscape are sectioned off by the inlaid steel, which mimics those paths made by a sailor’s sextant.

There is something vaguely nostalgic in nature here, as though you’re seeing a manifestation of a memory long forgotten. Within the sculptural elements, the paper has seen patinated to match the inlay, as though it is not an object on the landscape but one within the landscape; a conceptual element of grand scale.

There is an undeniable strength throughout the body of work, as firm and straight as the tracks that carried industry from one coast to the other, yet this fortitude is balanced by the warm dynamism found in the construction of his sculptures. The show indicates an expansion on the part of the artist, from pop culture articles to deeply ingrained cultural values. There is both a strength and fragility to the work, symbols of industry and Manifest Destiny that speak to terminal past as well as an ongoing future. Schematics and Silhouettes will be at Mike Weiss Gallery on West 24th Street through October 12th.