Launching the Festival with Two Plays at The Provinctown Theater 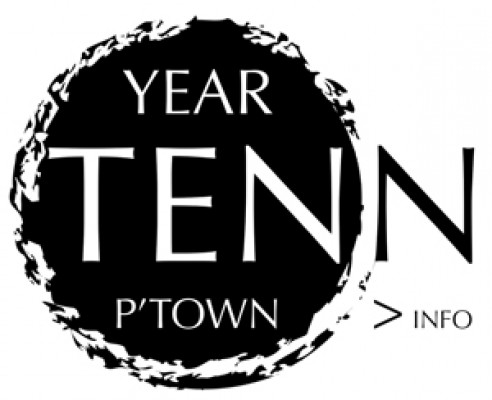 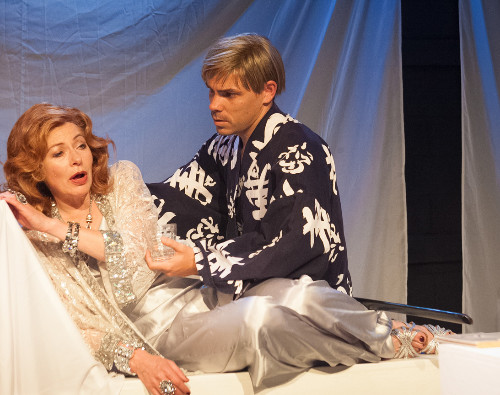 Jennifer Steyn as Mrs. Goforth and Marcel Meyer as the Angel of Death. Courtesy photo. 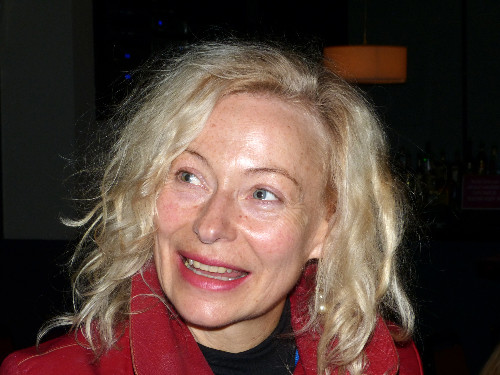 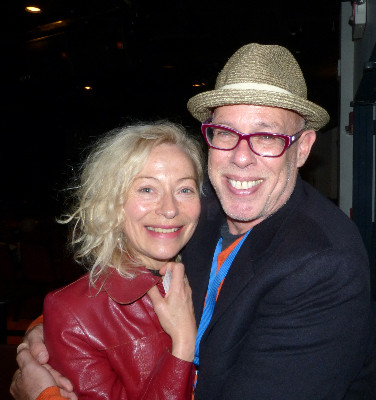 Steyn and David Kaplan who directed her. Giuliano photo. 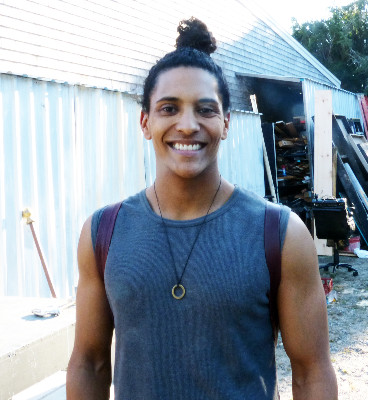 We learned a lot about Williams in NOLA including a lecture by his biographer John Lahr, panel discussions, readings and performances. A group of us even made a late night trek to see his home in the French Quarter.

Since then both Astrid and I have read Lahr’s 600 page book. It took us deeply into the complex persona and chaotic personal life that resulted in masterpieces of American theatre as well as many that opened and closed quickly.

Of the two plays we attended yesterday at The Provincetown Theatre, for example, The Milk Train Doesn’t Stop Here Anymore, had a brief run during the 1963 newspaper strike. It reopened in 1964 to scathing reviews and closed after five performances.

After a parting of ways with the director, Elia Kazan, Williams had only one more Broadway hit The Night of the Iguana followed by plays that were not. They ended in a conflict about what Williams told the media about the degree to which Kazan shaped the scripts into finished productions. Kazan decided to focus on his own work.

As the stunning performance of Milk Train demonstrated part of the decline of Williams was a paradigm shift away from playwrights of his generation and the embrace of new voices in theatre. In the fashionable world of Broadway the plays of Williams seemed dated.

The purpose of the Williams festivals is to take an in depth view of the work by a generation of new artists who regard him in the historical context of great American theatre.

Coming to this tandem of riveting and emotionally demanding works knowing his tormented biography helps in our understanding of what drives them. But they are dramas and not just case studies and must be approached as such.

For the occasion of the anniversary Abrahamse & Meyer Productions of Cape Town, South Africa, has returned to Provincetown and restaged Milk Train which previously earned rave reviews and awards for its performance.

With limited rehearsal time it is significant that the company not only prepared two complex, physically and emotionally demanding works, but performed them back-to-back in a single day. That was a true gift to the audience which allowed for appreciating the range and nuances of the company. In the use of technical resources including staging, lighting, costumes, sound and props both productions were remarkably inventive. They made maximum use of limited resources.

Seeing them back-to-back there is a commonality of Williams’s preoccupation with death and suicide. The circumstances of his death are indeed macabre and during the years of his long, slow decline those concerns are reflected in his work. Perhaps plays like these were too personal and arguably depressing to find favor with Broadway audiences. The intimate setting of small theatres and festivals, before audiences preconditioned to appreciate and revere the playwright, provides a better platform for their degree of difficulty.

During the afternoon we saw The Day On Which a Man Dies. It presents an ersatz Jackson Pollock, nude but for a thong, covered in paint, and using a sprayer as a tool and weapon. The artist has gone over the top in abandoning the brush in a bid to jump start a faltering career. If Williams is evoking Pollock his art history is off base. By abandoning the brush the artist created the most dynamic work of his generation. As his friend and rival William de Kooning said at the funeral (an accident/suicide) “Pollock broke the ice.”

The play is set in a pair of hotel rooms in Japan. There is a modular wall that separates the spaces. The studio of Man is utter chaos as he lurches about between long swigs of booze in a self indulgent rampage of creativity.

There are heated encounters with his mistress of eleven years who is preoccupied with the fact that she has no legal status in face of his inevitable demise as an artist (the gallery refuses to show the new work) and possibly as a man.

Given the Asian setting there are servants who attend to her demands.

The clash between the artist and his mistress is mostly over the top as directed by Festival organizer David Kaplan. It is set so high that the character of Meyer in particular has difficulty in creating mood shifts which are better handled by the astonishing Steyn.

In this staging, as they interact, our attention goes back and forth from his studio to her hotel room. We try to keep up with how they respond to each other in a situation accelerating into utter disaster.

While his behavior is out of control and a study in creative madness, arguably a caricature as films of Pollock at work show that he was in complete control, she goes through stages of self inspection and transformation.

It is evident that she wants to leave but under what terms?

We are riveted as she meets fire with fire in a more calculated and desperate strategy. This entails stripping to a thong, like his, smearing herself with paint and engaging in a fiendish destruction of his work.

Given that, by the end of the play, they were mopping the stage with psychic discharge it was phenomenal that there was enough left in their tanks to come back for an another, equally demanding, and outrageous performance.

Of the two plays Milk Train is more resolved providing another take on a Williams obsession with fame and its loss, the collateral damage of creativity, and possession.

During his life Williams had a number of relationships that resulted in dependency and resentment. Like Woman many of them wondered about their security and status having given prime years as lovers to the great man who was eccentric and demanding. In reality, Williams provided for them long after relationships ended.

While Milk Train flopped on Broadway the masterful performance of Steyn demonstrated why her Flora “Sissy” Goforth has a firm position in the canon of the many great roles Williams created for women. She is up there with Blanche and Maggie the Cat.

The outrageous Mrs. Goforth, dressed in jewels and glitter by Meyer, is attended to by resentful servants alone in a grand villa high above the Mediterranean.

Having married four times resulting in wealth, power, and a reputation as one of the great beauties of her generation, she is on deadline dictating her memoirs.

Williams created her as yet another delusional former great beauty. Steyn has taken that to the brink in a detailed and riveting persona that one will surely never forget or recover from.

The actress has twisted and wrenched herself into the role where her every utterance and gesture resonates in shock waves that roil the audiences like the crashing waves of the ocean below her villa.

A stranger, or is he, Christopher Flanders (Meyer) has scaled the goat path and invade her privacy. He has been set upon by attack dogs.

Through an exotic dramatic pas de deux she slowly concedes that they have met before.

It seems that he is a professional guest and Angel of Death who makes the rounds visiting rich, elderly women easing them into that place from which no traveler returns.

This second play allowed for better appreciating the range of Meyer in a measured and subtle performance.

In a battle of wits and will there is a dynamic conflict and subtle reversal as he presides over her demise. Given the orientalism evoked by the play we posit whether the visitor is a hustler preying on vulnerable, elderly, rich women or an avatar of mercy. It is that layer of doubt that provides plausible dramatic tension.

One wonders about the mindset of critics in 1964 but today Milktrain deserves reconsideration as one of the best plays by Williams. In South Africa, not surprisingly, Steyn won the Fleur de Cap award for Best Actress with her performance of Mrs. Goforth. American audience should see more of this accomplished artist.

As directed these plays evoke a Kabuki flavor with sound, and stylized acting by the servants. The servants, Nicholas Dallas and Daniel Richards, as they explain in an aside to the audience at the beginning of Milk Train, play a number of roles including as “invisible” stage hands.

This tandem of plays succeeded in taking us deep into the mind and soul of one the foremost, and most tormented, great American playwrights. For this passionate and insightful experience we are truly indebted to The Provincetown Tennessee Williams Theatre Festival.