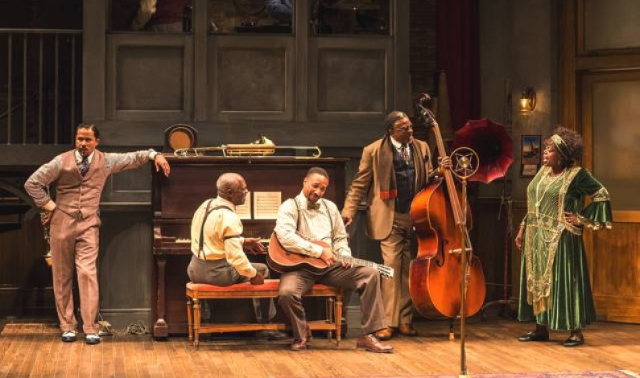 The great playwright August Wilson has been the voice and mirror for many African-Americans over the years.  Where fiery writer James Baldwin who was extremely articulate but angry and rightly so, railed at the injustices experienced by many African-Americans, Wilson just quietly and brilliantly opened a window to the everyday existence of black life and its community for all to see and appreciate.  In the long run, it was the smarter approach toward solving a 400 year-old shameful period in America’s history.  And there’s plenty of work still to be done.

‘Ma Rainey’s Black Bottom’ now on the boards of the Mark Taper Forum is fabulously acted and brilliantly staged by Tony winner Phylicia Rashad.  It was first of Wilson’s plays to be produced on Broadway (in 1984) and was most responsible for making Wilson’s ‘10-play Pittsburgh Cycle’ of African-American life become a reality. Rashad has also acted in Wilson’s play “Gem of the Ocean” back in 2003, playing the 287 year-old old family matriarch Aunt Ester (Wilson’s favorite character) on the stage of the Mark Taper Forum.

Now as the director of ‘Ma Rainey’s Black Bottom’, Rashad has corralled a cast of actors who graced her last production at the Taper, ‘Joe Turner’s Come and Gone’.  Back for acting encores is the wonderful Tony winning singer/actor Lillias White, as Gertrude Ma Rainey.  It’s a bawdy but telling performance of what it meant to be a black recording artist in 1927 Chicago. Her entrance alone is worth the price of admission. As showy as the role of Ma is, it’s the musicians   that back her performance, that get to play the meaty parts and shine in the process.

Actors Keith David (playing Slow Drag, the band’s string Bass musician) and Glynn Turman (portraying Toledo, the piano-playing band philosopher/musician, although the night I attended, understudy Ernest Harden Jr, went on in place of Turman and did the part proud.  The performance of Jason Dirden as the swaggering, cocky, trumpet player Levee, comes dangerously close to stealing the show from what the audience sees is a superb ensemble cast.  His flash and moves are so in the moment, it’s a joy to watch a pro work his magic.

Damon Gupton as Cutler, the trombone playing band leader that Levee takes pleasure in needling, is a steadying influence on the group, who also deals with Ma’s agent Irvin portrayed by a harried and nervous Ed Swidey.  Also in the ensemble is a sexy, stunning looking ‘girl toy’  of Ma’s, played by Nija Okoro, who immediately catches the eye of smooth-talking, confident Levee who has plans of a quick conquest.

Rounding out this stellar ensemble is Matthew Henerson as Sturdyvant, the cost-conscious record and studio producer, Lamar Richardson as Sylvester, Ma’s speech-challenged stuttering nephew whom she promised could introduce her on the recording, and Greg Bryan as the Policeman.

Director Rashad leads a creative team headed by Scenic Designer John Iacovelli, who created that wonderful set in Rashad’s production of ‘Joe Turner’s Come and Gone’, at the Taper in 2013.  Lighting Designer Elizabeth provides a balanced design that serves the two-level acting area, and delivers just the right amount of light to see the costumes designed by Emilio Sosa. The sound Design is by Dan Moses Schreier, with Hair and Wig Designs by Carol F. Doran. The Fight Director is Steve Rankin.  The Music Direction, Arrangements and additional music is under the baton of Steven Bargonetti.

‘Ma Rainey’s Black Bottom’ is a must see, splendid production that performs at the Mark Taper Forum through October 16, 2016.