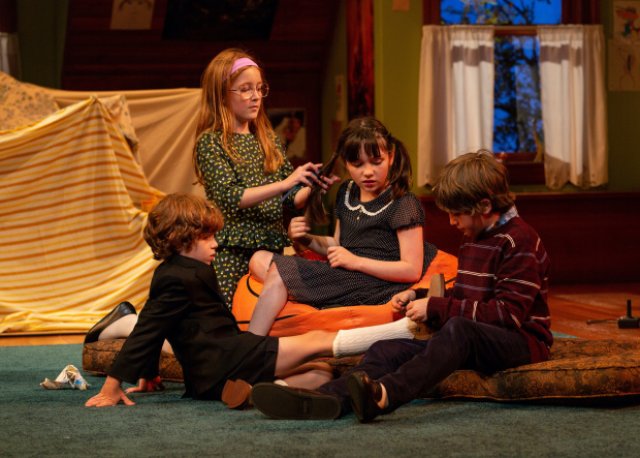 Parents tend to delude themselves that children are not aware of the reality beneath the exterior of the family. That’s the premise of Bess Wohl’s new play, Make Believe getting its world premiere at Hartford Stage through Sunday, Sept. 30.

The idea seems fascinating – looking at a family of four children growing up in the ‘80s during a family crisis. On the surface, you would think they are a typical suburban family – affluent and loving. But one afternoon, as the children arrive home from school there is no one to greet them. They retreat to their playroom where they act in typical sibling fashion interspersed with play-acting as “the family.”  Through a series of phone messages left on the machine – the children have been taught to never answer the phone – we learn that mom is nowhere to be found. The reliance on the phone messages is an easy but unsatisfying way to convey information to the audience.

In their play-acting, we find the children – who appear to range in age from 11 to 3 or 4, have picked up on not only the roles the adults play at, but the tensions that are in the marriage: alcohol, infidelity, some anger and lack of connection.

This part is one half of the 90+ intermissionless play. How you react to it may depend on how you feel about child actors and typical sibling behavior. Chris is the eldest and plays “dad” in the games. He torments his younger sister, Addie; the eldest, he also can become very angry. The elder sister, Kate is “mother” and acts that role in their normal interactions. She seems studious and tries to protect her sister from Chris. The youngest, Carl appears to be quite young and pretends to be a dog most of the time.

For some audience members, seeing the children using multiple swear words, talking about and carrying various alcoholic beverages and at the end, lighting up cigarettes, will be more than disconcerting.

The second part of the play which is set in the present, features three of the siblings, again in the playroom, escaping the reception going on downstairs following the funeral of their brother Chris.

The premise is to show how this traumatic early experience has impacted all of them. But it doesn’t really work. We learn that their mother had disappeared that day to create a new life and that Dad remarried and had a second family whom they all condescendingly refer to as “the Scandinavians.” But the connection between their childhood and who they became is tenuous, at best.

Now played by adult actors, Kate has long lost the “motherly” persona; she is a successful physician but is angry, cold and at times, nasty. Addie is a mother but one that seems more interested in the young man she has latched onto at the funeral than her young daughter; she’s a television actress of limited celebrity. Karl, who arrives late having missed the opportunity to give a speech at the funeral, is still the quirkiest of them. He may be on the spectrum, but he is apparently a very successful and laser-focused entrepreneur.

One of the more confusing decisions Wohl made is in the naming of the young man whom Addie has a fling with in the playroom. He is also named Chris. It can momentarily confuse you and then make you waste time trying to figure out why the duplication of names. He knew their brother and there are strong hints that the two were lovers. It is also clear that he knows more about Chris and his childhood than his siblings.

So what should we take from this piece? The obvious that children know more than we think they do? That they may not understand it but they pick up on the emotions? That childhood influences adult behavior?

Wohl says that she wanted to explore whether make believe as a way of healing is something that adults must let go of and confront the truth. Certainly, that aspect is not clear because it does not indicate any of the siblings as adults have confronted truths about their family and childhood.

Jackson Gay has directed this piece – she has been involved from early on – with a sure hand. The four child actors are all very good; it is just the characters and situation begins to grate on you and seems unrealistic.

The adults bear resemblance to the children so that it is easy for the audience to make the transition. Both Kates have red hair, both Addies are brunettes, and so on. But each of the characters seem both one dimensional and lacking in maturity. Megan Byrne as Kate has morphed from motherly to angry and judgmental. Molly Ward plays Addie as a self-absorbed, spoiled woman. Brad Haberlee as Carl hints more than the other siblings at some hidden pain. Chris Ghaffari as Chris, the very good looking, younger man has a thankless role. I’m not sure that Wohl ever determined what his function is in the play: boy toy for Addie, truth teller about Chris, comic punching bag for all of them?

Antje Ellermann has created a playroom that any child would love – spacious with everything a child would want including a tent. The lighting by Paul Whitaker and original music and sound design by Broken Chord are all good.

But at the end, like many world premieres, Make Believe has potential but it isn’t ready for prime time. When people start taking peeks at their watches during a 90 minute play, it’s a clear sign that something isn’t working.