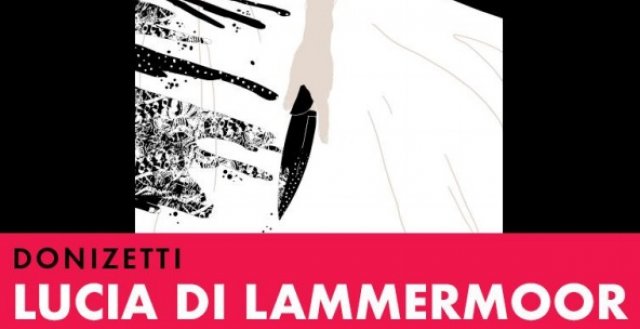 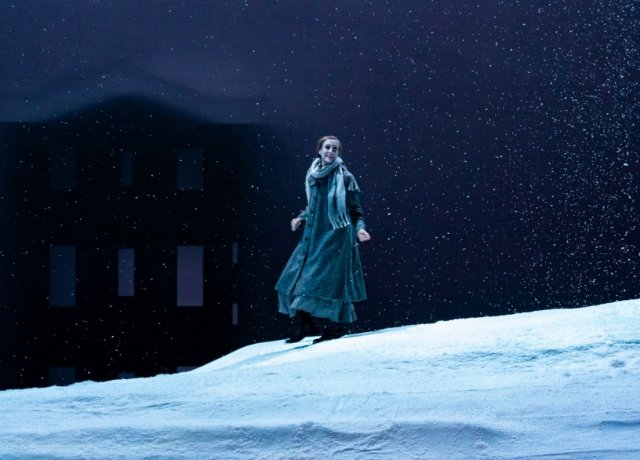 Brenda Rae as Lucia bemoans her mother's death and awaits her forbidden love. 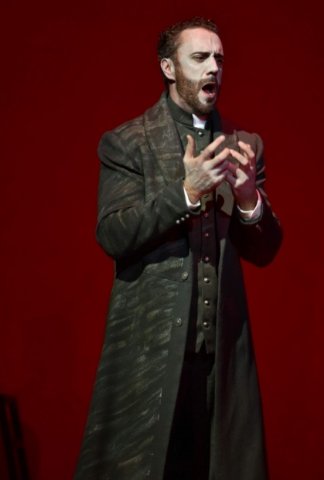 Troy Cooke, Lucia's brother, who is desperate to save the family's position. 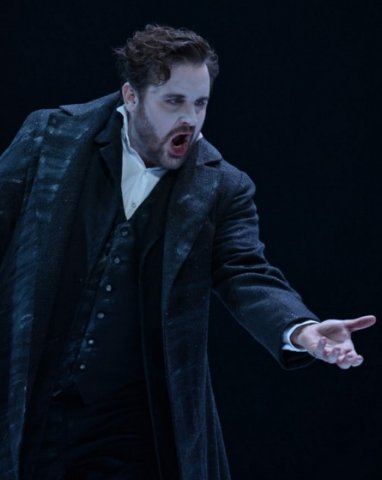 Michael Spyres is a strong yet subtle tenor. He will appear at the Metropolitan Opera in Berlioz' Damnation of Faust in 2020. 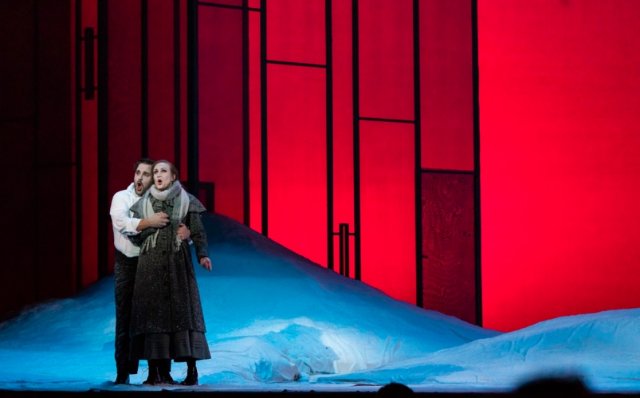 Red is the color of fantasy in the opera. The love duet expresses a wished-for union. 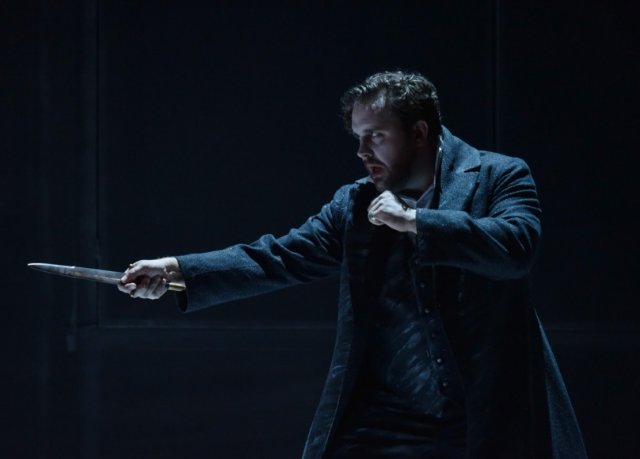 Michael Spyres at the ready 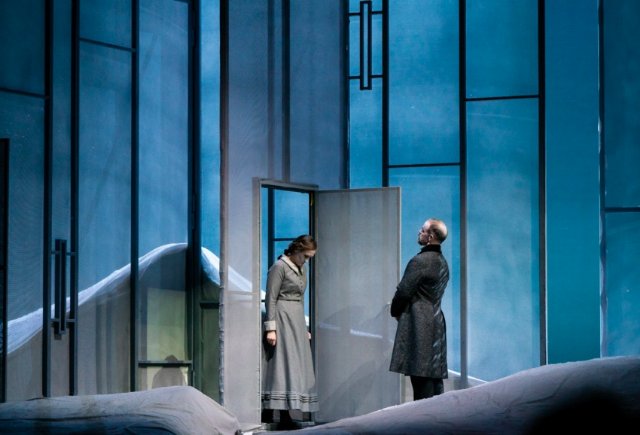 Lucia's brother demands a forced marriage to save the family's position. The interior of the castle is suggested by Mondrian lines. When clouds bank outside, a touch of Magritte is added. 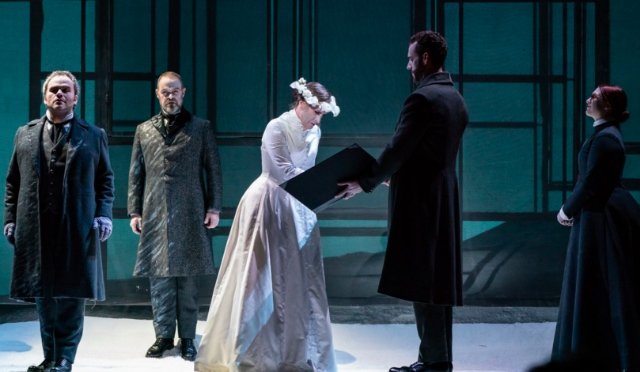 Lucia signs her life away in marriage. 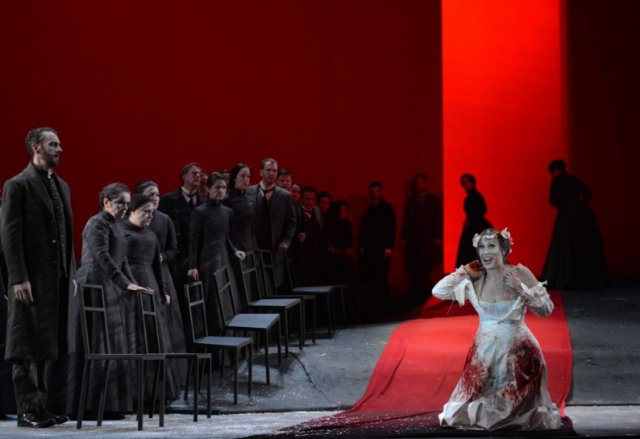 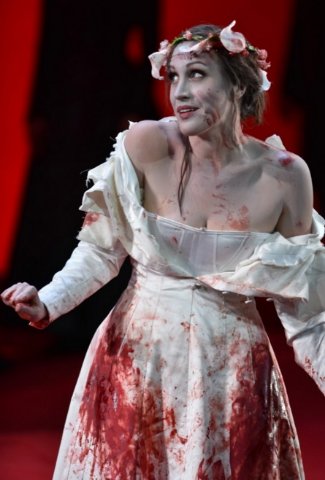 Looking as though her husband of an hour had mauled her, Lucia reports that he is dead.

Rumors that Gaetano Donizetti was of Scotish origin swirled over the Italian countryside when his opera Lucia di Lammermoor was first produced. They were untrue. Lucia’s Scotish origins were signaled by Scotch plaid thrown over Joan Sutherland’s shoulders.

Laurent Pelly who is responsible for the new production of Lucia now playing at the Academy of Music as part of Opera Philadelphia's must-see Fall Festival, has another take on North Scotland. It is often shrouded in darkness, snow falling and clouds hanging low. The stage is a symphony of grays, ranging from a light almost pink to a deep darkness. Costumes also are grey. This is an environment in which it is easy to get depressed or even  go mad.

We all remember productions past in which Lucia descends a dramatic staircase after murdering her husband of less than six hours. The staircase is mercifully absent in this production. Lucia enters on our level. However the open door bathed in red and raised at the rear of the stage was prepped for entrance and sadly unused.

In a curious way, the gloomy set serves to set off the gorgeous music of this opera. Pelly, coming from a theatrical background, has given us a Cendrillon that is as close to perfection as you can be in a delirious, multi-dimensional form.

This Lucia does not quite make that mark, because the decision to represent Lucia’s madness and depression with gestures that more closely resemble a spastic than heavy-hearted, depressed soul was unfortunate. Brenda Rae is a superior singing actress, and she has performed Lucia magnificently in the past. Her voice rises above the burden of her movements to give us a wonderful Lucia, light and dramatic like Natalie Dessay’s. Rae’s color is deployed to suggest fragility. She can be both expressive and sentimental. She becomes innocence betrayed.

Troy Cooke, a favorite in Philadelphia, is attractive as Lucia’s brother Enrico who wills her into an lethal match. He was directed to be as evil as evil can be, but cannot help being more rounded in his characterization.

The clear star of this production is Michael Spyres, too seldom heard in this country. He has a full-bodied tenor. The edge in his voice is subtle, and he deploys it at will to enhance the music's texture and dramatic line. He is the tenor of the curse and also the tenor of the beautiful death, bringing emotional range and delicacy to the role.  A musical polymath, he notes that singing as you die without acknowledging the condition boggles the mind.  In the final act of Lucia, his gorgeous lines are not diminished by a choking effect from time to time, as he presses to get a note out. He is, after all, dying. Donizetti is a poet of the voice and so is Spyres.

The production moves at a brisk pace and is thoroughly absorbing. Conducting by Corrado Rovaris was striking. Although we are often cautioned that the singers lead the music in bel canto operas and the orchestra follows, this production is very much a collaboration. Rovaris has a living, breathing orchestra.  We are invited to listen to the music, as we hear tantalizing pauses and slowing tempos at just the right moment. Horns establish the atmosphere. Winds provide color over the strings.

The orchestra’s presence enhances the production and seems a full and wonderful partner to the staging. A glass harmonica, which the composer wrote in to signify mental instability and madness, accompanied Rae in the iconic mad song.

One of Opera Philadelphia’s missions is to make worthy warhorses live in the now. The company has succeeded in Lucia, by seemingly contradictory means. Gray, dark, and brooding, the stage is on fire with song. The pit reciprocates.

In the end the set is bathed in red as we descend to murder and self-inflicted death-by-knife. The thrilling music of voice and orchestra lingers on.