At Barrington Stage to Oct. 24 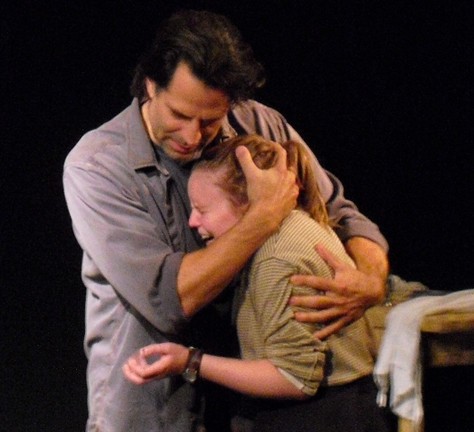 Christopher Innvar rehearsing for the Crucible.

The Crucible, Arthur Miller’s most performed play, was first produced in 1953 starring Arthur Kennedy and Beatrice Straight. The Crucible, set in 1692, uses the Salem witch hunts as an historical allegory for McCarthy’s blacklisting of Americans in the 1950’s.  The same mob hysteria takes hold in both periods as Miller examines religious intolerance, perversions of justice and the individual’s role in society.  The Crucible, which never seems to lose its relevance, explodes with passion, fear, and danger when a group of teenage girls, caught dancing in the forest, take their revenge on their Salem Puritanical society by naming names of townspeople who they claim are witches.

Since achieving fame with his early plays All My Sons (1947) and Death of a Salesman (winner of the 1949 Pulitzer Prize for Drama), Miller has become an American icon and pioneer in the development of a distinctly American form of theatre.  In connection with The Crucible, Miller said that “conscience was no longer a private matter but one of state administration” and that men seemed satisfied with handing off any sense of conscience to other men. His extensive list of works spans the last six decades and includes plays, screenplays, novels and essays. Some of his notable plays include A View from the Bridge (1956), Incident at Vichy (1964), The Price (1968), The Ride Down Mount Morgan (1991), Broken Glass (1994), Resurrection Blues (2002), and Finishing the Picture (2004).

Performances of Arthur Miller’s The Crucible are from October 6 through October 24 - Wednesday and Thursday at 7pm, Friday and Saturday at 8pm, and Sunday at 3pm at BSC Mainstage, 30 Union St., Pittsfield. An additional matinee will be held on Wednesday, October 20 at 2pm. Student matinee performances are October 8, 15, 19 and 22 at 10am (not open to the public). Press Opening: Sun., October 10 at 3pm. Tickets: $15-$35. Weeknight Previews: Oct. 6-8: $20 and $15.  Pay What You Can Night for 35 year olds and younger: Friday, October 8 at 8pm. Family Night: Youth 18 and younger are free when accompanied by a parent/guardian on Friday, October 15 at 8pm. Barrington Stage is fully-accessible, including wheelchair accessibility and assisted listening devices at every performance. Accessible seating is available by reservation. For ticket information, call 413-236-8888, stop by the BSC Box Office at 30 Union Street or visit www.barringtonstageco.org