Michael Cristofer’s Man in the Ring 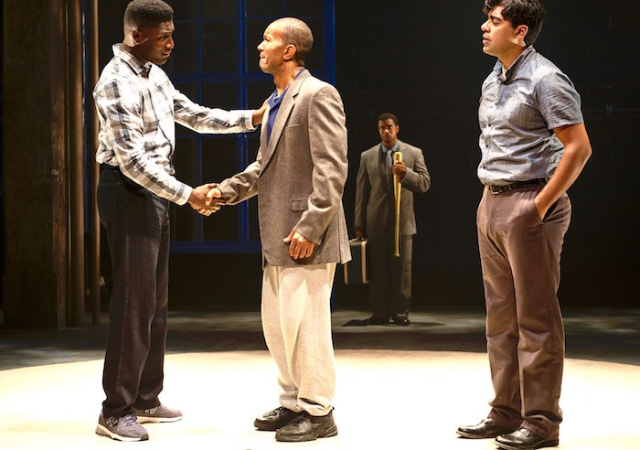 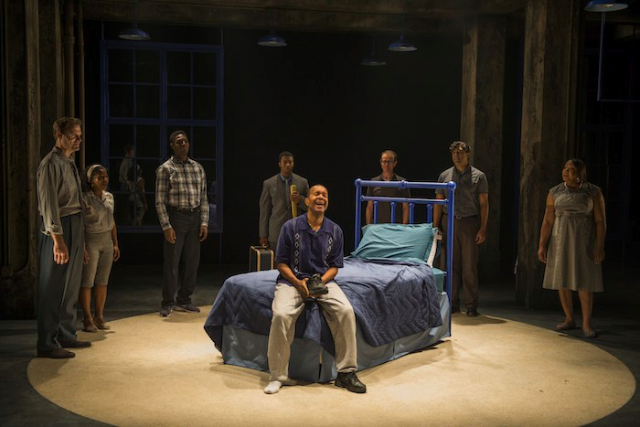 Emile Griffith’s summation of his life also sums up Michael Cristofer’s play, Man in the Ring, in a world-class world premiere now being staged at Court Theatre.

The fact-based play is the story of boxer Emile Griffith, six-time middle- and welter-weight champion. But although it’s a story about prizefighting, as the professional sport is known, there’s no literal pugilism on stage. Instead director Charles Newell shows, in sensitive and ingenious ways, how elements of Griffith’s life—including abuse by an older man, his bisexual nature, and grooming by an ambitious manager—come together on that fateful night in March 1962 when he fights Cuban world welterweight champion Benny “Kid” Paret.

Griffith is played as a beautifully muscled and talented young man by Kamal Angelo Bolden and as the older Griffith, suffering from “dementia pugilistica,” by Allen Gilmore, one of Chicago’s finest (and underrated) actors. Griffith is discovered at the age of 16 in 1956 while working as a hatmaker in New York’s Garment District. Factory manager Howie Albert (Thomas J. Cox) volunteers to train and coach Griffith as a boxer when he observes his physical abilities. Griffith and his mother Emelda (an astonishingly warm and affecting performance by Jacqueline Williams) were immigrants from St. Thomas in the U.S. Virgin Islands. Emelda, who had six children besides Emile, laments how she had to leave them behind with different relatives to make money to support the family.

Journalistic conventions and the boxing community itself protected Griffith from publicity about his homosexual activities. He visited gay bars and invited boyfriends to the gym. But Paret (Sheldon Brown) taunts Griffith before and during the weigh-in before their championship fight. As the fight progresses, Albert encourages Griffith to go after Paret, while Emelda alerts us that Paret “drops his hands when he’s on the ropes.” In the 12th round, Griffith does get Paret on the ropes and delivers an onslaught of punches; the referee does nothing to stop the fight. (The final moments are reimagined with the use of lights flashing on and off.) The result is a knockout and a championship win for Griffith. But Paret lies in a coma in the hospital for 10 days before he dies. Griffith tries repeatedly to visit him in the hospital but is turned away.

For reasons that may not be clear today, boxing was a pop culture smash a half century ago. The Friday Night Fights had a huge broadcast audience on network TV. Griffith’s talent plus his exuberant personality and flashing smile made him a fan favorite.

Paret ‘s head had been battered in several recent fights so it seems questionable that he should have even fought that night. Griffith himself suffered many head injuries and begins to show symptoms of brain damage during his career. His boyfriend Luis (a sensitive performance by Gabriel Ruiz) becomes Emile’s caregiver and his longtime partner.

The story winds back and forth between older Emile in his fractured memory and his younger self being discovered, growing in stature and popularity, and then declining. At times older Emile seems to shadow young Emile. He hovers about the scenes in which his younger self performs.

Gilmore is the one of the most “present” actors I have ever watched. In his every scene, whether he has dialogue or not, he is totally attuned to the characters and the action. You can almost feel his actorly antennae vibrate.

This is an amazingly talented cast and Newell brings out their finest work. Besides Gilmore, Bolden and Williams, Cox and Brown are both excellent. Brown’s scene as the younger Bennie meeting the elder Griffith is heart-wrenching.

John Colbert’s very simple staging features a lighted central area where the main action takes place and a structure of blue metal bars and struts, representing the gym or arena. Keith Parham’s lighting design is a powerful element in the action. Andre Pluess makes extensive use of body percussion in his sound design, including using baseball bat percussion in the dark to simulate the repeated punches of a boxing match. Dialect coach Adam Goldstein succeeds in coaching his actors in the lilting island accent.

Playwright Michael Cristofer won a Pulitzer Prize and a Tony Award for his 1977 play, The Shadow Box. He is an actor, director, filmmaker and writer. He collaborated with trumpeter Terence Blanchard to create the libretto for the jazz opera Champion, about Emile Griffith, which was performed in 2013 at the Opera Theater of St. Louis. He currently plays Philip Price, the CEO of E Corp on USA Network’s “Mr. Robot.”

Man in the Ring continues at Court Theatre, 5535 S. Ellis Ave. in Hyde Park, through October 16. Performances are Wednesday-Sunday, with two performances on both weekend days. Tickets for $45-68 can be purchased online or by calling 773-753-4472.