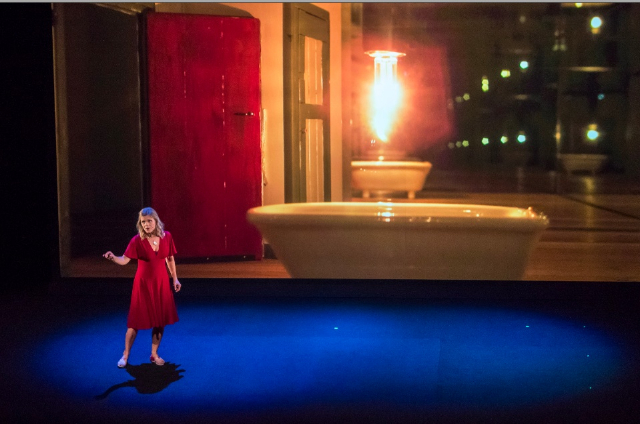 Miah Persson, magnificent in Blank Out 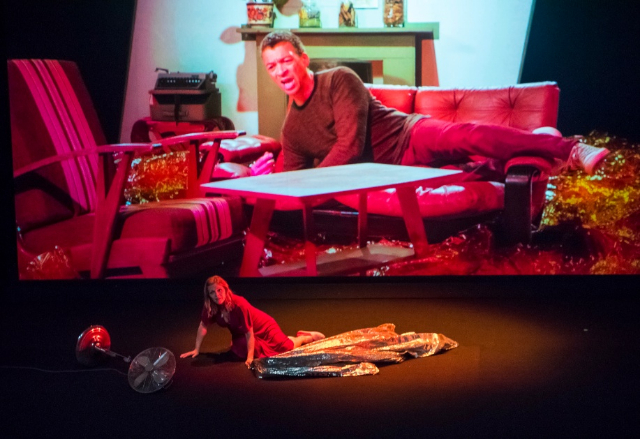 Persson in 3D miniature, caught by lava, as Roderick Williams recalls her. 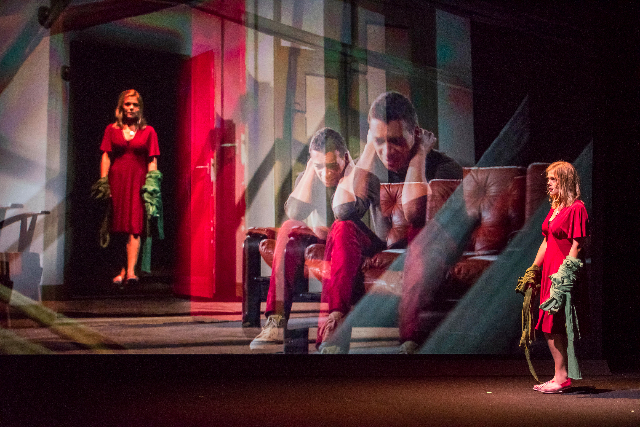 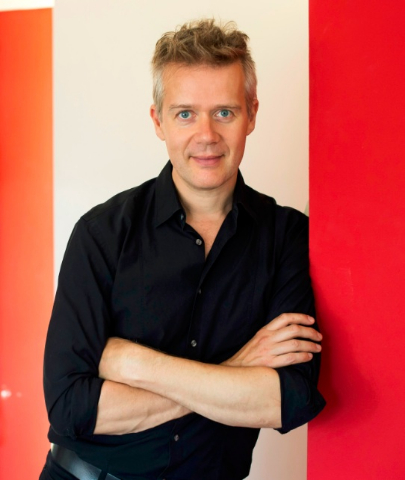 Michel Van Der Aa, composer and creator of Blank Out

Under the canopy formed by the 80 foot high vaulted dome of the Drill Hall in the Park Avenue Armory, Michel Van der Aa’s brilliant chamber opera, Blank Out, unfolds. In this gargantuan space, we seem small and so do elements of the opera. We are perched on seats in a rising stadium seating and have what seems to be an Olympian view, until we again became aware of the totality.

This opera is in part about scale, so the Drill Hall is a perfect setting to further remind us that there is an Olympian view and that our own scale is very small. The painter Ben Shahn often used this shock of scale. Miniature and gigantic man.

In a delicious reminder of often repeated images, a son we at first imagine drowning at the age of seven tells us that his mother loved to look at herself in mirrors. The opera is also a tribute to reflection. The reflectors are 3D images we are watching through 3D glasses.

Miah Persson, in a daring performance in which her texture and range are tested, more than meets the mark.  She is a mother. At first she stutters in broken phrases trying to talk about her son. She brought him up alone and was deeply attached. So much so that pain and sorrow that always attends motherhood is almost unbearable. The cacophonous, dramatic, searing leaps in the soprano line that often accompany horror and excruciating disappointment in the soprano roles of contemporary opera are full or rich yet confused feeling. Persson, grown up from her Gretel, performs this challenging, very adult role with subtlety and power.

First time opera goers often ask, as an opera begins, when will they speak? It takes a while to adapt to the conventions of opera. Blank Out being unconventional has much spoken language. Based on the poetry of Ingrid Jonker, the sound is musical as the lines are spoken by the principals. They are full of beauty and might even be called music.

At one point, the son, performed only on the 3D screen by baritone Roderick Williams, breaks this spell, He turns in his chair, broadly smiles and seems to look at an off screen interviewer, perhaps us or the director.

Surprising and satisfying touches like this abound. When you first see a pile of the smooth black rocks we use for skimming the water's surface, Hans Brinker comes to mind. The opera is set in Holland where dykes often stem disaster.  Then you think of Jenga.  What would happen if one stone in the middle is pulled out? As a four year old, the boy puts a stone up his nose to feel the warmth.  It has be extracted by a local doctor. The stones eventually explode and even turn from black to white in a stunning visual.

The opera is mysterious.  Why does the mother wear a red dress and the son, red pants.  Blood red or emotional heat?

The poems of Ingrid Jonker are woven in. Who could ever forget "I saw the swallow swoop up and shadow starlings."

When the boy now grown returns to his childhood home, he adjusts the position of living room furniture to match his memory.

Much of this room is revealed to us in a 3D film the mother is making. Persson moves from the center stage over to a small table in which dollhouse-size figures of a house and a tree are magnified in real time on the screen as she films. None of the technical feats of the production interfere. They are organic and we accept them without reservation.

The Netherlands Chamber Choir is recorded and sings a beautiful background. The other music is also canned, but always appropriate.

Most important is the tape that is unraveling before us. Has this story been told on tape? Certainly in a scene toward the end of the opera in which the son sits at a table and listens to a tape recorder like Becket’s Krapp, one element of the opera is clear. This story is all remembered, even as it unfolds in real time, remembered in real time.

Working with dramaturg Sophie Motley, Van Der Aa creates a work that is ineffably beautiful and sad. Part of its power is clearly enhanced by the location in the Drill Hall of the Park Avenue Armory.

Note: This review is influenced by a conversation with my companion, Ariel, as we walked across Central Park after the performance. We had both been profoundly moved and provoked.