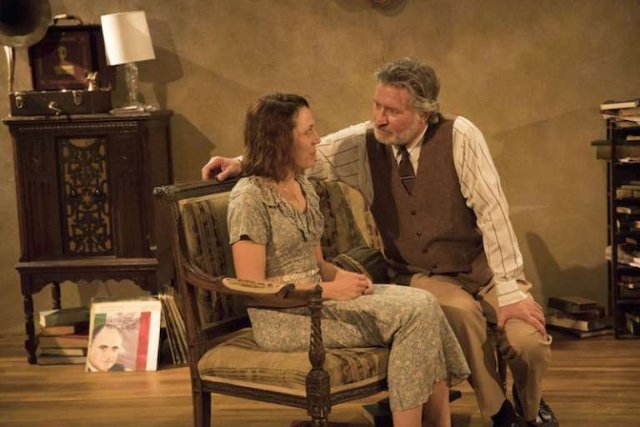 Bedwell and Wilson as Ersilia and Nota. Photo by Chris Popio.

It’s Rome in 1922. In his play Naked, Luigi Pirandello, the Nobel Prize-winning author, concocts a puzzling tangle of death and passion. Directed by Kay Martinovich, Naked is now on stage at Trap Door Theatre, where you can expect to see intriguing and unsettling work by European playwrights. Naked is no exception although you won’t learn the meaning of the title until the very end—and sorry, but nudity is not involved.

Love forms triangles in Pirandello’s Naked. There’s Ersilia Drei (Tiffany Bedwell), who loved Franco Laspiga (Ambrose Cappuccio), a naval lieutenant who was engaged to someone else but then decides (too late?) that he loves Ersilia. And Ersilia with Grotti, the Italian consul in Smyrna (Darren Hill), and his wife, for whom Ersilia worked as a governess. Grotti doesn’t want to disrupt his marriage but he lusts for Ersilia and she returns the lust, which has disastrous consequences that set Ersilia into emotional turmoil.

The main thread of the play is in the mind of a popular writer, Ludovico Nota (Bob Wilson), who learns of Ersilia through a newspaper article written by journalist Alfredo Cantavalle (Keith Surney). Cantavalle interviewed Ersilia, but did she tell him the truth or fabricate details? Nota rescues Ersilia from a hospital after her attempted suicide and invites her to his home, thinking there’s a plot for a novel in her tragic story. “As soon as I read that article,” he tells her, “the entire plot for a novel took shape in my mind, from beginning to end.”

Mrs. Onoria (Manulea Rentea), Nota’s busybody landlady, both helps and hinders Nota and Ersilia. She is alternately scornful and solicitous of the young woman and her problems.

Pirandello places Ersilia at the center of his story and suggests that her tragic fate is the result of mistakes and misunderstandings between her and the men in her life. Naked is an example of what he called “tragical farce.” It was the only form possible for “a play with tragic elements in an era best suited to farce,” according to his translator, Nina da Vinci Nichols. Pirandello is best known for his 1921 play Six Characters in Search of an Author, but he wrote a huge volume of novels and short stories, as well as 20 major plays.

Trap Door’s production of Naked is engrossing and sometimes confusing, but Martinovich’s direction is smooth. The cast is generally capable; we particularly liked the performances of Wilson as Nota and Rentea as the landlady. Nick Schwartz’ design for the author’s apartment is prototypical, with its piles of books and 33rpm record albums. Lighting is by David Goodman-Edberg and sound design by Evan Forbes. Costumes are by Rachel Sypniewski.

Naked continues at Trap Door Theatre, 1655 W. Cortland, through October 27. Tickets are $20-25 for performances at 8pm Thursday-Saturday, with two-for-one admission on Thursdays. The play runs about 95 minutes with no intermission.