Plein Air Paintings and Prints of Adams and North Adams 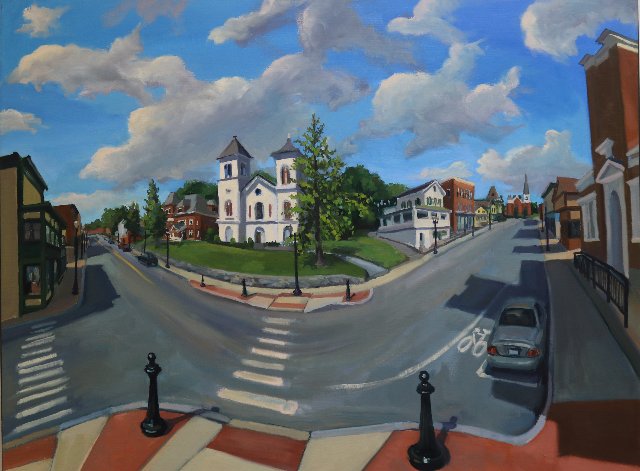 This view of Adams was painted steps from Real Eyes Gallery where it hangs. Giuliano photos. 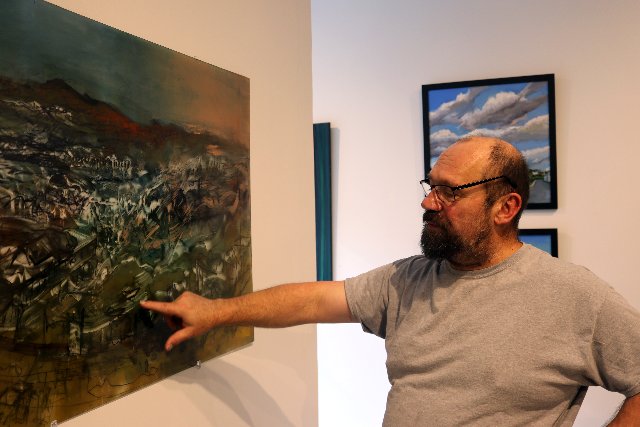 Alvin dicusses the layering of this multi media work. 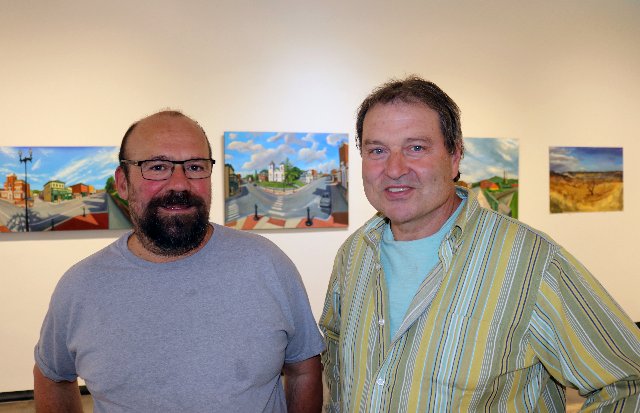 The artist and gallerist Bill Riley. 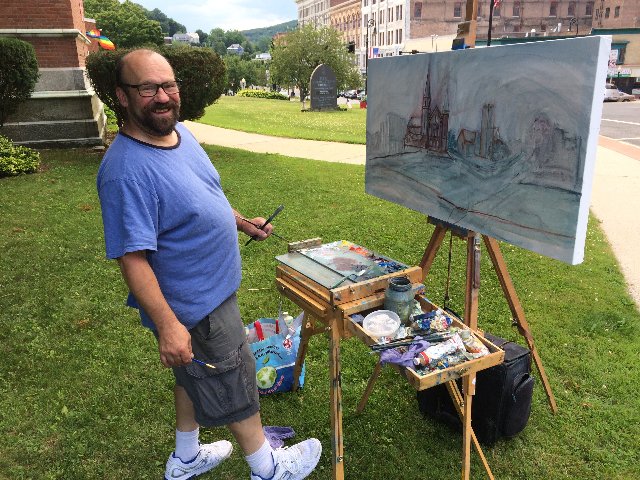 A couple of summers ago in North Adams.

That sketch of North Adams was finished this summer. 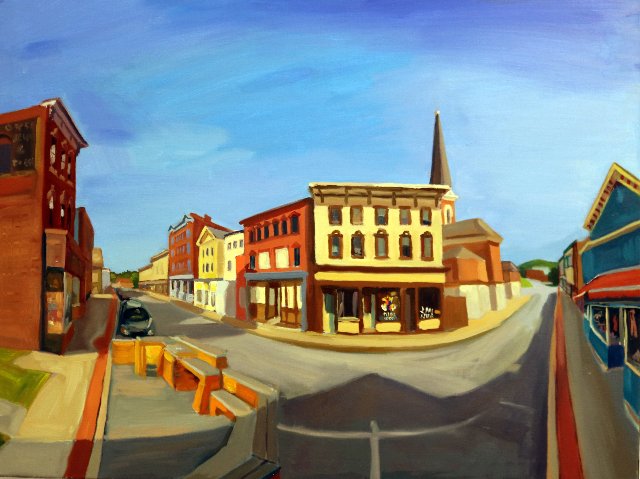 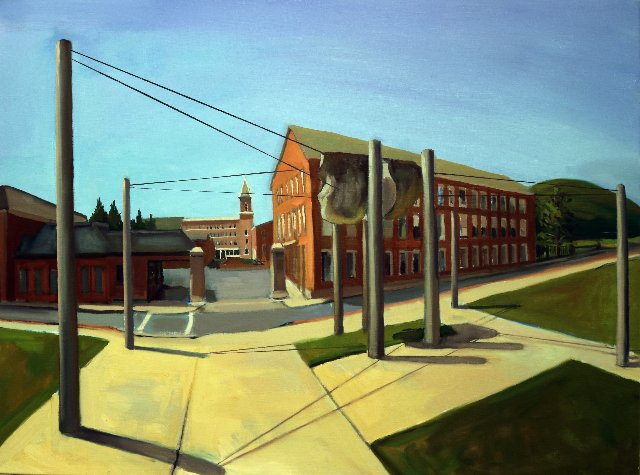 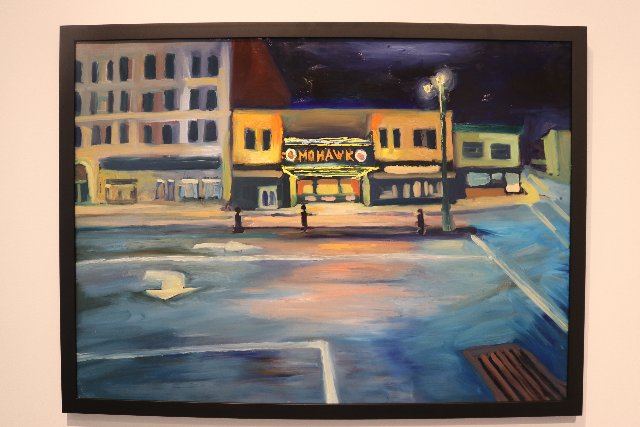 The Mohawk Theatre in North Adams. 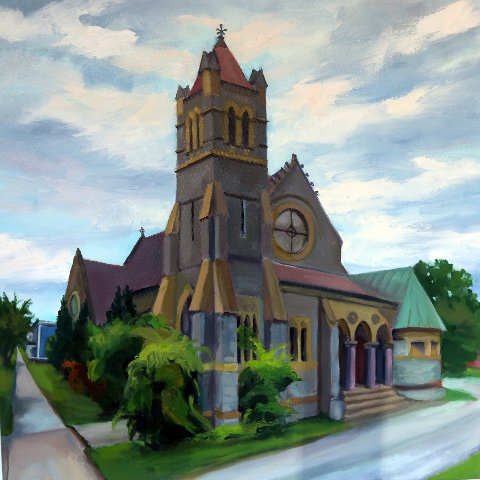 A church that van Gogh would have loved,. 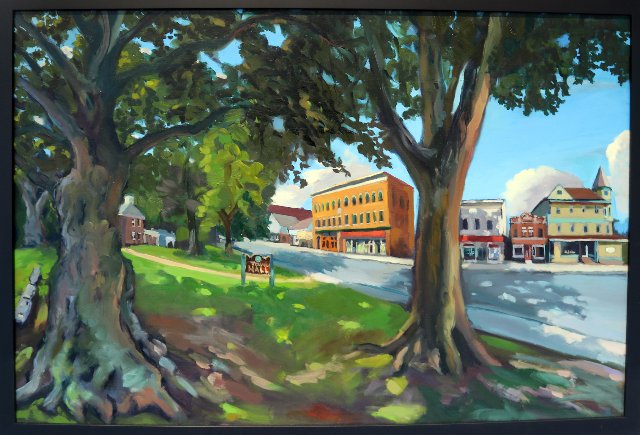 Adams from in front of City Hall. 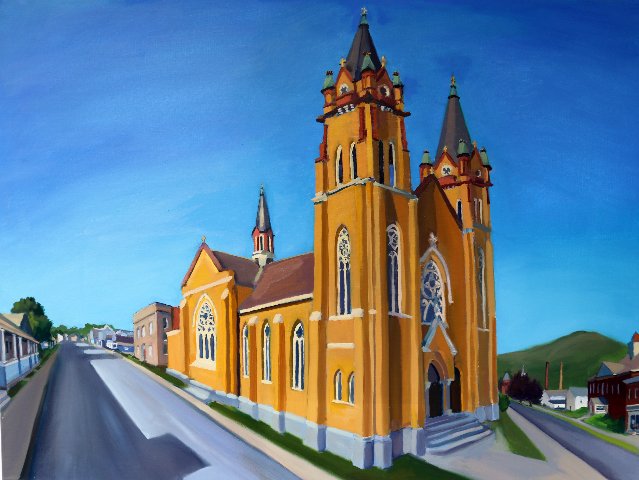 Beauty of an underpass.

Come to think of it they have a lot in common. It’s easy to imagine them hunkered down over absinthe swapping tales and trade secrets. They share an interest in elevating the rural and mundane into memorable and iconic images.

With poetic irony, visitors to Ouelett’s one man exhibition at Real Eyes Gallery in Adams literally walk past his subject matter. To verify the veracity of his depictions one need but stand and gawk about on Park Street.

There is the fun and excitement of recognizing the seemingly quotidian. Just what is it about that town library, storefront, or church that I never quite noticed or appreciated?

Could that be? Yes, of course it is, St. Stans! What a sweet little picture. Reflecting its diverse ethnic populations Adams has its three churches and North Adams is known as Steeple Town. The local baseball team is called The Steeplecats. Unfortunately, one of those churches done got busted down. That’s  a crying shame.

During warm weather it is common to have close encounters with the artist. A couple of summers ago I parked the car and popped by to take a gander. The moment was recorded with a couple of cell phone shots. He recalled the occasion.

“That summer I did the drawing which is what you saw,” he said. “Then this season I returned on site to do the painting.”

It is one of a number of images that fill the gallery.

“I wanted to show new work” he explained looking about. “Everything you see was done in the past two years. I was worried about not having enough work but I was able to fill the gallery.”

That’s saying a lot as Real Eyes has generous and luscious space. Artists love to show there because their work is so well installed by gallerist Bill Riley.

A couple of years ago Alvin and Jose Duran set down roots in Adams. He retired after some 30 years at Mass College of Art. He earned a BFA there in 1985 and two years later an MFA. He majored in painting and print making which he later taught as well as running the print studio.

On every level Ouellet brings remarkable resources to the community. Out on the street, standing at his easel, he signifies the presence of artists. His works in the grand tradition of expressionist realism help us to see and appreciate small town America. His unique contributions promote the region.

His modernist approach, in direct line with van Gogh, is not to depict but rather to interpret the quirky rural buildings. None of them are particularly notable examples of architecture. But his askew renderings are full of humanity and affection that elevate them as monumental and iconic. He paints mongrels rather than thoroughbreds.

Ouellet is doing for indigenous structures what architect Simeon Breuner accomplished for MaSS MoCA. Rather than raze and rebuild, the fate of urban renewal that destroyed much of North Adams,  reuse architecture preserves and refreshes. Architects and artists help us to recontextualize 19th century industrial mills and the towns that grew up around them.

That’s what Norman Rockwell did for Stockbridge but in a more picture post card manner. It’s unlikely that Adams will ever have a spread in Yankee Magazine. But it would be nice to see Alvin celebrated in art magazines. His paintings of Northern Berkshire County would look great in hotels and businesses popping up like weeds.

What follows is Ouellet’s artist’s statement.

My paintings, prints and digital images explore the interactions of the built and natural environment and result from close observations of light, value, color and form.

I seek to create imagery that envelopes the viewer. I peer into, behind, above, around and through changing scenarios; bending spaces in order to reveal their dynamic interior life and exterior forms. By utilizing multiple and curvilinear perspectives, I attempt to "take it all in" as if I were floating through space in order to capture the dynamics of time, change, motion and meaning.

What fascinates me about the visual interactions of the built and natural environment are the narratives these relationships depict about the forces and people who envision, construct, occupy, adapt and re-create forms and spaces over time. The juxtaposition of the architectural and natural forms, in their current state of life and decay, visually indicate stories about the forces of time, history, purpose and meaning.

By painting, printing and collaging cityscapes, landscapes and interiors from various vantage points, I want my work to challenge viewers to perceive the built environment as a natural manifestation of our ideas about home, shelter, community and civic life.

Far from being opposites, the built and natural environments are part of a continuum of life in which a skyscraper is no less a part of nature than a cocoon created by a moth.