Liszt Performed in the Catacombs 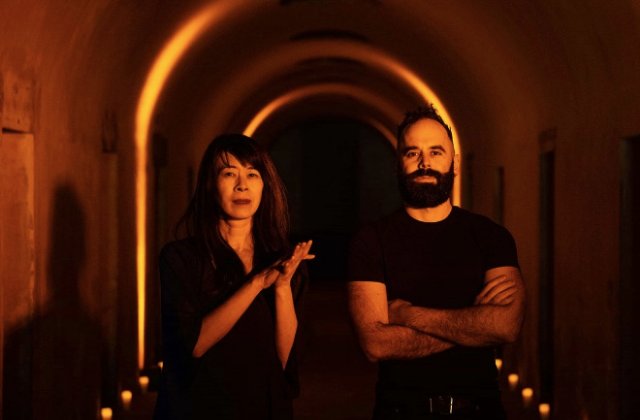 Pianists Jenny Lin and Adam Tendler took on one of Franz Liszt’s early and most demanding compositions, alternating roles as performance artists and page turners.  Yamaha had delivered a grand piano which fit between the arched stone walls of the Catacombs at Greenwood Cemetery in Brooklyn.  The lid of the piano was completely removed, allowing a bright, distinctive tone to emerge, even when so many notes cascaded that it might have been difficult to distinguish one from another.

Franz Liszt’s position in the performance repertoire is under reconsideration. His importance as a composer was overshadowed by his dramatic performance techniques during his lifetime. Filmmaker Ken Russell celebrated this impression in Lisztomania, in which Ringo Starr appeared as God.

Under appreciated also is Liszt's early attraction to religion.  He considered becoming a priest.  Eroticism of a Liszt composition and religious ecstasy come from much the same place.  We come to appreciate the power of his emotional composition as Lin and Tender performed the ten sections of his 1833 Harmonies.

Fresh from a transcription of Berlioz’s Symphony Fantastique, Liszt used his solo fame to promote the work of others.  From Berlioz, he learned the limitless extent of symphonic sounds which could be performed at the keyboard.  What surprises are the contrast between the dramatic intensity of multiple scales and arpeggios making a sound that fills the entire arched space, and singular notes, often in patterns of three, that bring us to a quiet, contemplative place.

Technical mastery of the instrument is only the starting place for these two gifted pianists.  Lin carefully etches three-note clusters that often appear, creating melodic lines, both quiet ones and one’s embedded in a seeming chaos of chords.  Tendler had clearer lines and his soundscapes drew chords and scales amidst a rush of notes.

In the long arched tunnel that forms the catacombs, circular mirrors of varying sizes hung over the piano.  The top had been removed and the audience could peer at the reflections of the sounding board and hammers as they were transported by the music.  Producer Andrew Ousley has a special touch, from his introductory to concluding remarks which warmly and informatively bracket extraordinary music-making.  These concerts are sold out in five minutes, so order early.