JACK Quartet at the Catacombs 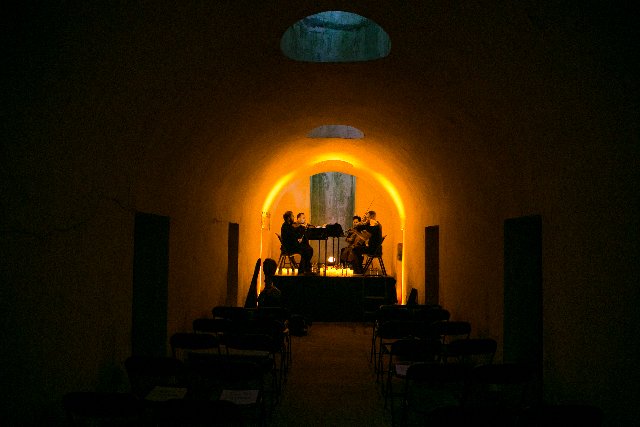 JACK Quartet at The Catacombs in the Green-Wood Cemetery in Brooklyn.

In these perilous times in our country, the JACK Quartet began their program with the sole surviving piece of Rodericus, from the 14th century. We know little about the composer, except that he composed under the reverse of his name, Uciredor.

Proportion is on display, and we hear the harmony of the angels contrasted with Eve’s sin. This program, under the heavenly touch of Andrew Ousley, will surely deal with the angelic. Its opposite number usually crops up too.

We began in the mysterious catacombs of the Green-wood Cemetery in Brooklyn, listening to the only Uciredor piece that remains, Angelorum Psalat, arranged by JACK violinist Christopher Otto. The many ways that the JACK instrumentalists approach their strings are on immediate display. Pluckings, bowings and the myriad of techniques will be deployed throughout the evening.

Solage composed in Paris at the end of the 14th century. She was part of a group that smoked hashish and perhaps her high helped to create an incredible chromaticism, filled with unexpected twists and turns.

For Chaya Czernowin’s string quartet, a dark mood and drifting sleepiness is evoked in the lower registers. The cello sounds are like a surface of the unknowable texture, emitted at among the lowest levels imaginable. Some say this work is like being swallowed by a whale. It emerges from the shadows. Like many pieces this evening, the quartet moves between intimate and cosmic.  From squeaks to the universal.

The evening ended with a wild ride with John Zorn’s sixth quartet, a part of The Alchemist. Zorn’s string quartets are some of the most important modern contributions to the repertoire and this Zorn quartet is inspired.  Condensation, the application of heat, crystallization, sublimation, purification, rotation as well as numerology, prayers, canons, counterpoint, and ghosts. So thick is the music that you absorb it whole.  It consumes The Catacombs and takes us into other spheres.

We can count the ways the JACK delights. Depth, breath and height, as far as the strings can reach, up and down. The Catacombs, wrapped in a mysterious yellow light ebbing to darkness added to this moving presentation.