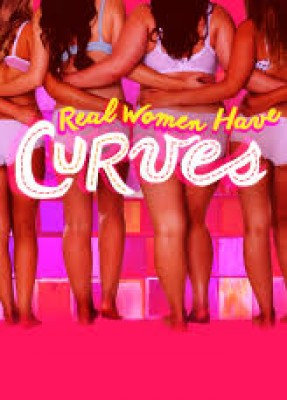 The new buzzword in 21st century arts is “Diversity”. It’s been a long time in coming but it’s finally arrived. The world of entertainment has embraced diversity for some time, however, the full force of the movement hasn’t been seen or felt by audiences on the theatrical stages of America until recently.

The venerable and renowned Pasadena Playhouse (the official State Theatre of California) under the 18 year artistic leadership of Sheldon Epps, has long been a leader in diversity, as witnessed by the creative artists who stage their productions and in its casting of their performers. Artistry, quality, and high professional standards have been hallmarks of Pasadena Playhouse productions for a long time.

The current comedy production “Real Women Have Curves”, written by Josefina Lopez is skillfully directed by playhouse associate artistic director Seema Sueko. It’s a delightful comedy that shows off the indomitable spirit, grit, and power of women in our society, who when they bond, can do anything as songwriter Helen Reddy’s anthem of the 1960’s women’s movement proclaimed, “I Am Woman … If I have to, I can do anything… I am invincible”.

The story set in a tiny sewing factory in East Los Angeles in 2015, celebrates Latina power and Latina women’s bodies. The crowd-pleasing production stars four full-figured and one thin diet-pill abuser, actors in “Real Women Have Curves”. It’s a touching look into the lives of five undocumented Mexican garment workers in Los Angeles struggling to capture just a tiny piece the American Dream.

Estela’s four employees: Carmen, the eldest and the group’s inspirational leader is played by the wonderful Blanca Araceli. Pancha, is introspectively and guardedly played by Ingrid Oliu. Rosali, the diet-pill abuser (her way of controlling her weight) is fearlessly portrayed by Diana DeLaCruz, and the young high school graduate and budding writer Ana, who keeps a diary of her days working with the other ladies, is nicely played by Santana Dempsey. The talented cast is a case study in ensemble performance generosity.

It’s been a blistering triple digit week in LA and Estela is slightly behind in her schedule to deliver 100 plus garments to her customer by morning. When a power failure hits the neighborhood not only does the temperature in the small factory immediately begin to rise, the tempers of the ladies rise accordingly. With no power no work can be completed. There will be strangers, electrical workers, and police in the area trying to get the power back on line. Fear of deportation and separation is a constant worry in the garment industry.

For a good deal of the time the ladies fuss, wait and gossip. Gossip never goes out of style. Subject matter varies, but eventually the discussion of marriage and men rears its head. Maybe it’s the heat, but the ladies begin to open up concerning their male-dominated culture and its views about the role of Latina women in it. The subject of body types and size measurements surface. As way of laying out the elephant in the room for discussion, the women begin to disrobe down to bras, panties and girdles revealing their varying sizes and weight distributions. The audience (80% women) at first, gasp, then begin to applaud and then break into laughter and more applause. It’s a bold and empowering moment for the actors and a liberating moment for the audience. The entire scene takes no more than three or four minutes but its impact is enormous and cathartic.

Prior to the curtain I spot stand-up comedian, actress, writer, and TV producer Cristela Alonzo giving an on-camera interview to a local Los Angeles TV station. We briefly discussed her 2014 ABC- TV show called “Cristela” which she created and starred in. Then she shared some of her feelings about the “Real… Women production “… our Latino community has been in the dark for so long, I want to thank Sheldon Epps for his support and his passion concerning diversity at the playhouse. We (Latinos) don’t need to go to New York City to have success; we can do it right here in Southern California” adding, “Dreams come without an expiration date. My advice is be authentic. Have no regrets. I like being authentic.” When I ask what her next play is about, she breaks into a wide smile and with twinkling eyes says ‘Real Men Cook and Wash Dishes’; quickly adding she’s just joking.

Being authentic is certainly in evidence when it comes to the creative team led by director Sueko in delivering a wonderfully picture-perfect design space by Scenic Designer David F. Weiner, with Lights designed by Josh Epstein, and a sound track by the ever-reliable Cricket S. Myers; are first rate. Also, Casting Director Julia Flores always seems to come up with winning actors when she’s on the job.

“Real Women Have Curves” is a terrific production that everyone should see and enjoy performs at the Pasadena Playhouse, and runs through October 4, 2015.