Yin and Yang of Tennessee Williams

From Juvenalia to Theatre of the Absurd 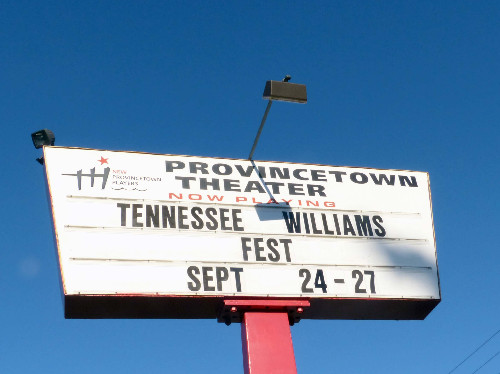 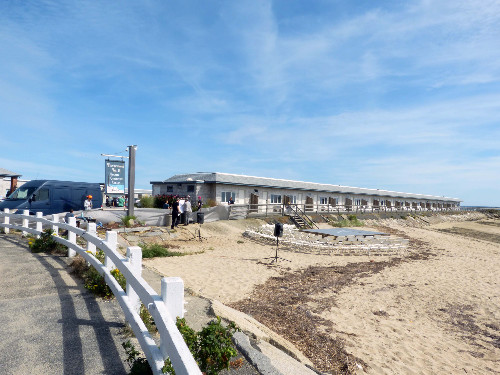 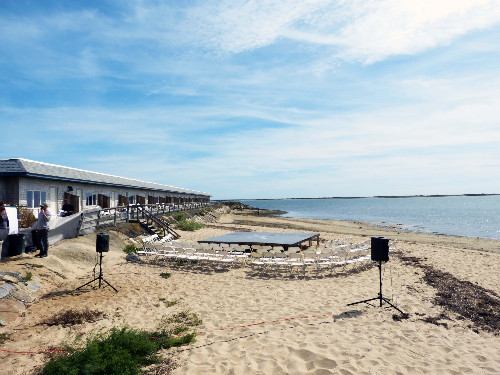 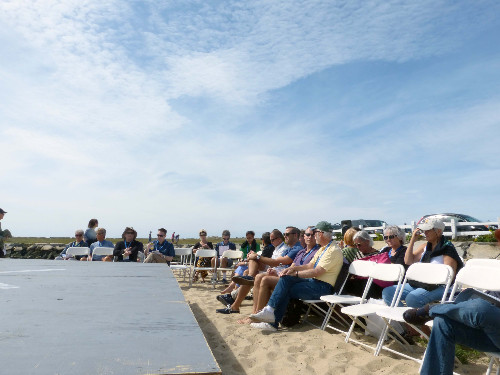 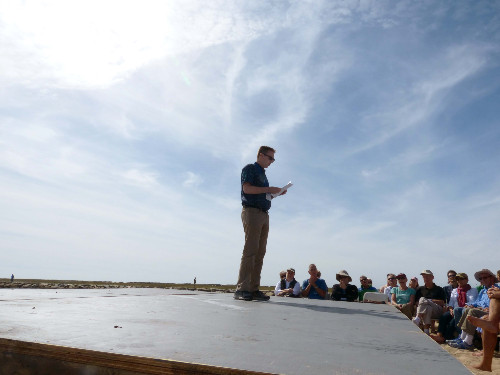 A board member states that Parade "put the festival on the map." 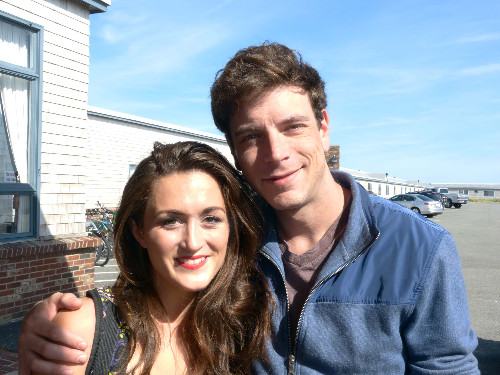 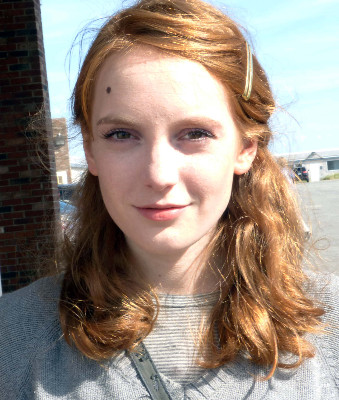 Ruby Wolf was sensational as Miriam. 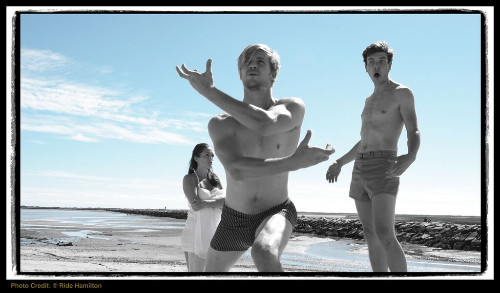 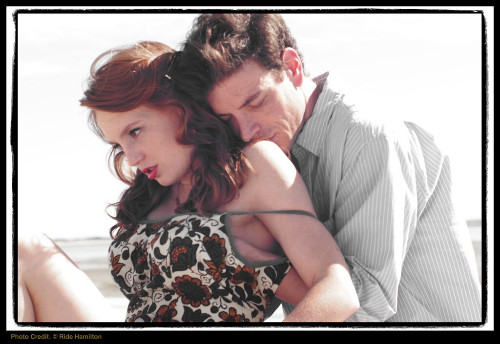 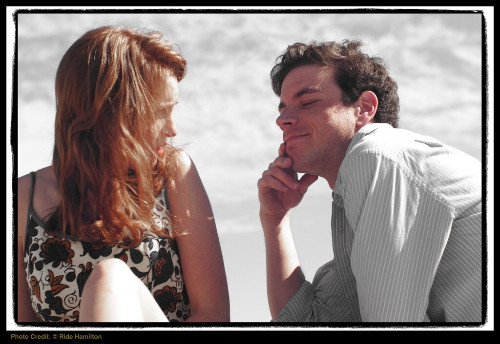 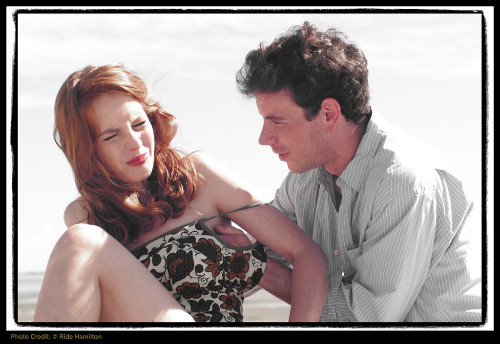 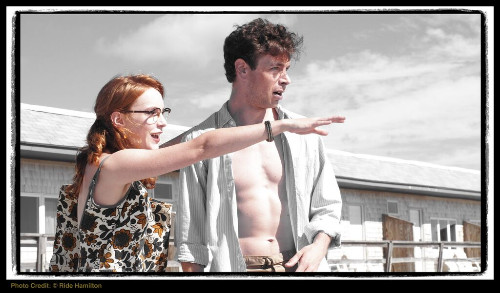 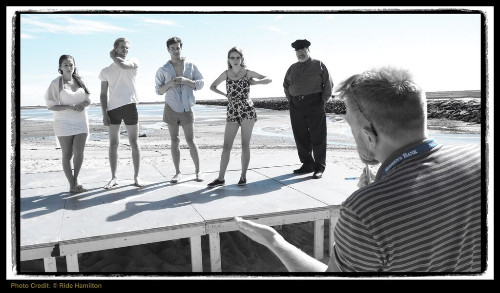 The cast being directed by Jef Hall-Flavin 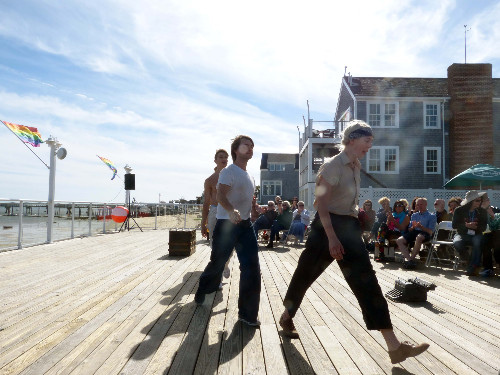 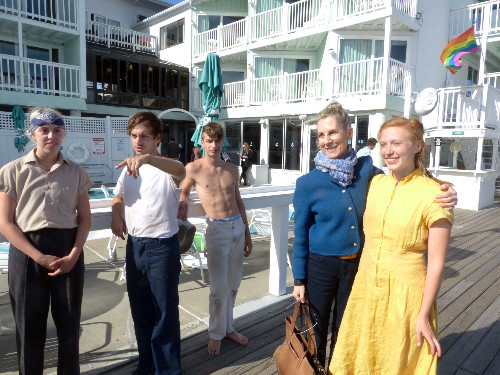 The Bennington group relaxing at the Boatslip. 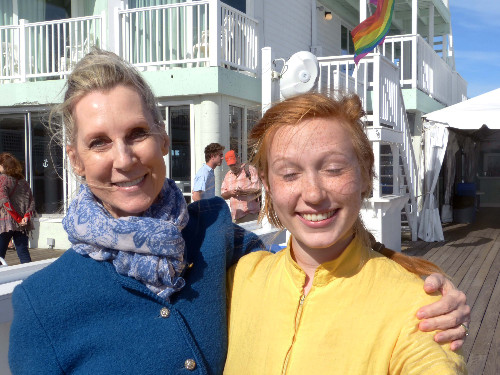 The dancer Chloe Engel and her mom. 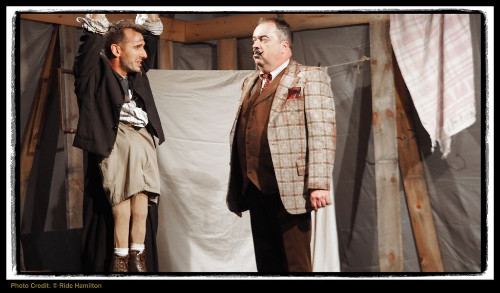 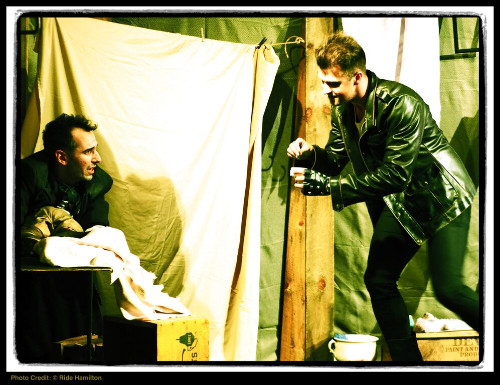 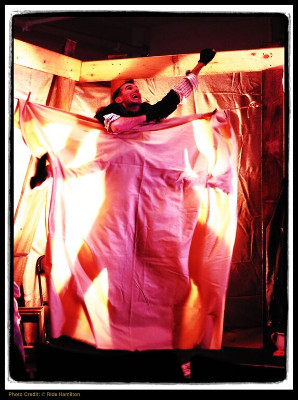 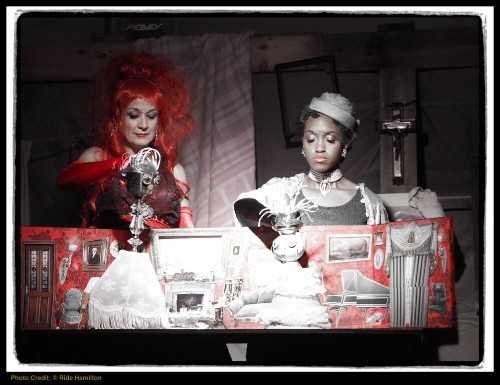 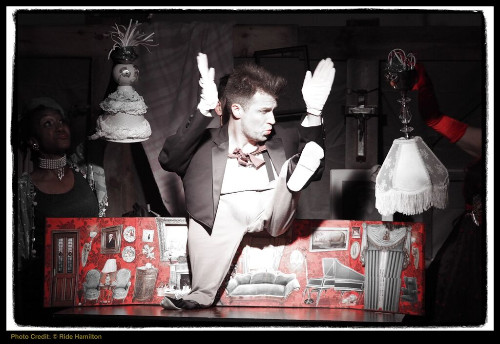 Nick Roan and Jordan Harrison collaborated to create the visitor.

From September 24-27 during the recent tenth annual Provincetown Tennessee Williams Festival we attended nine performances. That included all of the featured events minus a production of "Suddenly Last Summer" which we saw during the New Orleans Williams festival in April.

There were some other events and parties which we opted to pass up in an effort to conserve energy. The pace started with two shows on Thursday, three each on Friday and Saturday, winding down with a staged reading of a developing John Guare play on Sunday morning.

Part of the challenge of the festival was getting to the various venues and parking. The town was relatively quiet when we arrived on Monday evening but mobbed by the weekend. It was also Pet Appreciation time and the dogs, of all kinds, roamed the narrow streets.

Anything goes in the circus like atmosphere of Provincetown which has just grown more intense since the summer of 1940 when Williams (March 26, 1911 - February 25, 1983) first visited. Like many gays there was the joy of just being himself. That took the form of a love affair with a Canadian dancer, Kip Kiernan.

That experience was the inspiration for a play he wrote that summer “Parade.” The pages were torn out his notebook and seemingly abandoned. They were rediscovered and reworked by Williams in 1962.

The lovers shared a two-story shack on Captain Jack’s Wharf. As Williams writes in his “Memoirs’’: “We slept together each night on the double bed up there, and so incontinent was my desire for the boy that I would wake him repeatedly during the night for more love-making. You see, I had no sense in those days — and nights — of how passion can wear out even a passive partner.”

David Kaplan, the curator of the festival, is credited for identifying the final version of “The Parade” and distinguishing it from Williams’s copious earlier drafts. It premiered in Provincetown and was presented again this year during the festival.

Attending a festival is about much more than seeing a lot of work in a relatively short amount of time. There is the phenomenon of absorbing and sharing a dense critical mass of information. It conflates with, morphs and changes, all of your prior knowledge and sensibility about one of the foremost and most daunting American playwrights of his generation.

In a sense, like others my age who grew up in the dark, you feel you know Williams through his films especially those directed by Elia Kazan. That is the Williams of our collective unconscious. Add to that all of the productions seen on stage.

Wanting to share the work with my students we read "The Poetics" of Aristotle, and viewed “Streetcar Named Desire” in class. The assignment was to apply Aristotle’s paradigms of drama to a classic film.

Frankly, I felt good about myself for presenting them with Brando and Leigh. During discussion a student said that he didn’t like the film/ video. When I asked why he said “It’s black and white and would have been better in color.”

But in Provincetown the work of Williams was more than black and white or even color. It was there living and breathing in front of us seen surrounded by nature and the brilliant, toasty heat of late September.

We saw two versions of the Kip saga al fresco. For “Parade” the one act play was mounted on a platform set on sand in a cove. The dance/ drama “Road to Paradise” was staged on the deck of the Boatslip with its panoramic view of the harbor.

More than just inventive settings the festival also allowed us to experience the bookends of the work of Williams from the juvenilia of the Kip pieces to theatre of the absurd, macabre, rough sex, Grand Guignol of the tandem of plays “The Remarkable Rooming House of Mme. LeMonde” and “Aimez-vous Ionesco?”

There were other works and discussions in between but I was fascinated by how the pendulum of the writing of Williams swung so wildly from the tentative, poetic, vulnerable telling of the Kip tale to over-the-top, flat out outrageous Mme. LeMonde. Almost back-to -back the festival took us from here to way out there.

By their very nature the Kip pieces entail young actors and dancers. That creates issues and limitations. Of the two works, overall, the dance/ drama by the Bennington based performers was more successful and emotionally compelling.

What marred “Parade” was a less than convincing Dick (Nash Hightower) as the Kip love object. On a hot day he was stripped to a bathing suit which allowed for appreciation of the tall, slender dancer’s body that was the object of desire. Don (Ben Berry) as Tenn was credible in his longing and sense of rejection.

Despite the fact that they spent nights together Dick cringes at the advances of Don. There is a kind of cruelty which should be more natural in the manner in which he pulls away.

Dick  is practicing a series of dance moves for a pending audition. He accompanies himself to the point of annoyance by the repeated Germanic phrase “Oom, Pah, Pah.” He is calling out to his girlfriend Wanda (Brownwyn Whittle) who is to bring a portable record player for his rehearsal.

My interest in the play was headed south until the entry of the nerdy Miriam who was played with zipping wit and fully realized complexity by the wonderfully talented Ruby Wolf.

We became completely absorbed and fascinated by this gawky young girl who has a very obvious crush on Don. She cavorts and flops around the platform with a great display of aspects of exasperation. Miriam, who was based on the New Yorker Ethel Elkovsky, will do anything for Tenn including letting him fondle her breasts. It is cruel of Don to arouse and lead her on in that manner. It was also revealing of a basic character flaw that would haunt his life through a series of mostly chaotic and tragic relationships.

During the scene where Don toys with and rejects Miriam he describes love to her as like a parade that "none of it's actually come by, and my neck's getting stiffer. ...The elephants may have revolted against their drivers, possibly trampled them, even as they turned at some intersection not expected. See it? Slowly – ponderously with a - beautiful, massive grace they've turned away from the route that was planned in advance, and the others have followed suit, they've all gone up a back street, just distant enough so I can't even be sure that I hear the music."

The telling of the tragic Kip story was far more satisfying in “Road to Paradise.” Although quite young it was evident that the Bennington company is well trained. There was a nice confluence of the elements of spoken text, the heart wrenching poetry of Williams, then interludes of dance that put the text into motion.

The telling of the tragic love story was so gripping that I fought back tears during the death scene. Tenn visited his former lover, then married, in the hospital as he lay dying of a brain tumor. He was dead at just 26 leaving scar tissue on the heart of Tenn that would haunt the rest of a tormented life.

For me it was a wonderful work and one of the truly moving moments of the festival.

It provided a day and night contrast between the poetic and tentative young playwright and the take- no- prisoners, mad attack of Mme. LeMonde.

After parting ways with Kazan there was one more hit on Broadway “Night of the Iguana” in 1961. By 1963 his career on Broadway ended when “The Milk Train Doesn’t Stop Here Anymore” closed after just five performances following savage reviews. The festival staged a stunning production of "Milk Train."

He continued to work for the next twenty years in an arguably darker and more ironic manner.

Many factors were entailed in his critical demise. It has been suggested that when his career faltered on Broadway that set the media into attack mode. A part of that entailed homophobia and reaction to his social and political views. During the McCarthy era his status in Hollywood served as a buffer. When that declined the harpies were unleashed.

Introducing the production of “Mme. LeMonde” in a studio of the radio station WOMR a board member commented that the play was long viewed as “unstageable.” It is indeed a very different kind of work than the ones directed so successfully by Kazan.

In this macabre work we experience Williams as exploring the avant-garde. It makes one consider to what extent he was intrigued by Brecht, Beckett, Ionesco and theatre of the absurd. This is day and night, light years away from the Aristotelian classical theatre of his prime.

Program notes for the play reveal that Williams suffered the loss of the use of his legs while on his porch in Key West. He spent hours just trying to reach the door. This real life incident that “really rocked him” inspired the outrageous character of Mint (Jordan Harrison).

This pathetic creature is a tenant in the attic of the rooming-house of Mme. LeMonde. In order to navigate the space he works his way about by grabbing onto hooks attached to the ceiling. He is utterly dependent on her for tea and biscuits.

While cowering and simpering about Mint is a flagrant S&M perv abused by his landlady’s brutal son (Nick Ronan). He appears to creep up to the attic for rough sex with the helpless Mint.

This occurs behind a curtain but back lighting creates a silhouette. The rape scene, excuse me, is just hilarious although it really shouldn’t be funny. It was so graphic that is made you gasp for air. Let’s just say that it played well in P’Town.

Enter his old prep school mate Hall who has a scheme to scam the landlady. As played by Larry Coen he is a delicious bounder who further torments the pathetic and cowering Mint. It seems they were chums back in the day at Scrotum-on-Swansea.

After Williams died in 1983 the estate was presided over by Lady Maria St. Juste. She was a horror who denied access to scholars. That has changed since her death in 1994. There is now enormous interest in Williams including work inspired by his poetry and short stories. In addition to festivals in New Orleans and Provincetown there are two in Mississippi and one scheduled for May 11-15, 2016 in St. Louis.

During a presentation by John Lahr, a Williams biographer, in New Orleans he looked around the room and speculated that his manuscripts might well fill it. Even Lahr, who worked on his biography for a number of years, stated that he has not come close to reading all of the work.

There is enough new and inspired material to keep five festivals and other projects running for years to come. It is possible that even scholars will never come to truly know the full depth and range of Williams.

One such example was the cleverly presented world premiere of “Aimez-Vous Ionesco.”

Rather than change costumes and sets it was staged as a puppet show. Yet again there is a tea party and visitation. This time the legs of the visitor are draped over the wall. The character is manipulated with hands and feet by two actors. It’s all great fun.

Taken back to back the Kip tales and outrageous late works evoked the yin and yang of Williams. In years to come we hope to flesh out what came in between.