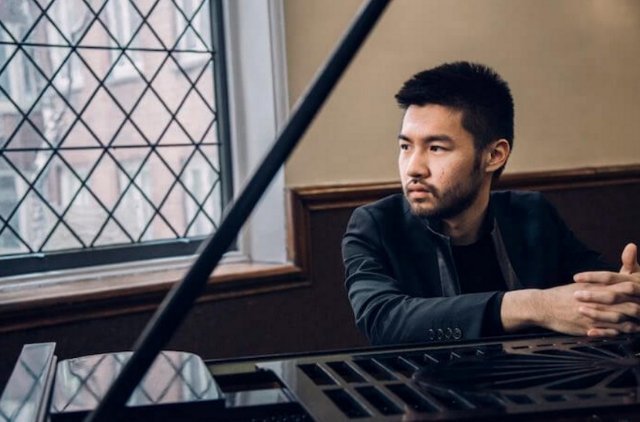 Conrad Tao’s world premier composition Everything Must Go was performed by the New York Philharmonic and followed without a breath by Anton Bruckner’s powerful Eighth Symphony.

Tao talks about listening to the world about him. It is no longer a world of bird calls and tree leaves whispering in the wind. At one moment you hear an Edgard Varèse-like traffic screech. Yet it is the percussion the brings us into an urban sound scape, slapsticks, temple blocks, brake rims, tom-toms and a kick drum create new sounds that startle the ear.

Tao says: “The piece also grew out of an image I could not quite shake: the image of a cathedral melting and, through its melting, gaining sentience. This idea of collapse or ostensible decay as a generative thing–as creating consciousness–would not leave me. On some level, the piece is an organism that, after shedding its initial form as an edifice, is awakened to the complexity, the constant questioning, and the sense of shared responsibility that comes with being alive.”

Tao imagines the cathedral, magnificent in harps, xylophone and marimba and the melting away to make way for a new space. It feels holy. The suggestion of a Claude Debussy phrase from Submerged Cathedral floats subtly by.

Tao creates an unsettling darkness which so perfectly set off the first movement of Bruckner’s symphony that many of the audience started. Whose music were they hearing?  Tao loved being the send up for Bruckner and disturbing the audience. Unstable tremolos are the least of the Bruckner.

The Philharmonic, under Jaap van Zweden, gave a thrilling performance of the Eighth Symphony. The ”churning, insistently slow pace of the symphony” had inspired Tao too. In the hand of the orchestra’s brass and woodwinds, the lovely repeated melodies soared. The demands on the strings may be exhausting, yet surely they were 'giving up' all their energy to the Bruckner. Terrifying dissonance disturbs. Chromatic fragments celebrate beauty. Trumpets blast out funereal tones. Basses sigh.

It is of a wonderful sound and space world for both composers. Duplicating the sound of his instrument of choice, the organ, in a swelling orchestra, Bruckner too hears the indeterminate sounds of our time.

The Philharmonic is introducing Nightcaps after the main event. The beautiful Kaplan Penthouse was packed for the inaugural evening. Tao would open jumping off from two Bruckner motets. “Ave Maria” and “Christus factus est.” He proposes to explore “ritual and spiritual music…The intense shared experience that much spiritual music seems attuned to…an analogue in playing collaboratively with others. Thus, I will be bringing on two close collaborators and friends, vocal improviser Charmaine Lee and tap dancer-choreographer Caleb Teicher, with whom I’m lucky enough to make lots of different music. The evening will encompass improvisation, computer choirs, harsh sheets of sound, ASMR.”

Big, conventional classical music organizations now need Tao and other young talents whose nips at their heels have barely registered until very recently. This is not true of the new Philharmonic music director, who identified Tao early as a brilliant pianist and violinist, and also a budding composer. Slowly step-by-step, Charmaine Lee at Roulette and Caleb Teicher at Baruch have stepped into the limelight, as Tao has, on his own terms.

Friends in Los Angeles, where Deborah Borda brought the LA Philharmonic into the future, have told me that we are lucky to have Borda as the NY Phil’s’ CEO. This evening was a clear mark of her success in reaching out with this evening in “blazing calm.”