From Stratford Festival to Chicago's Timeline 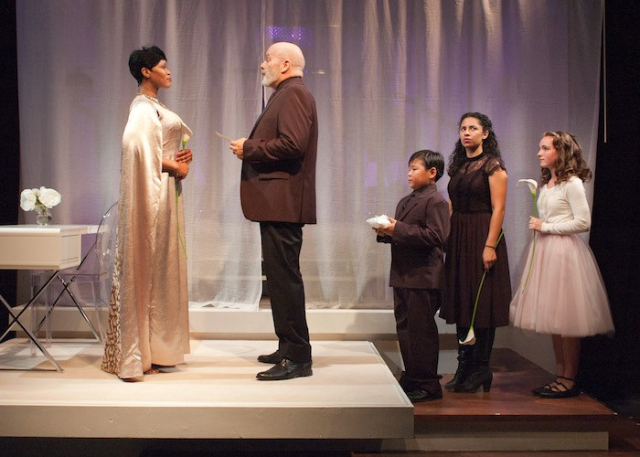 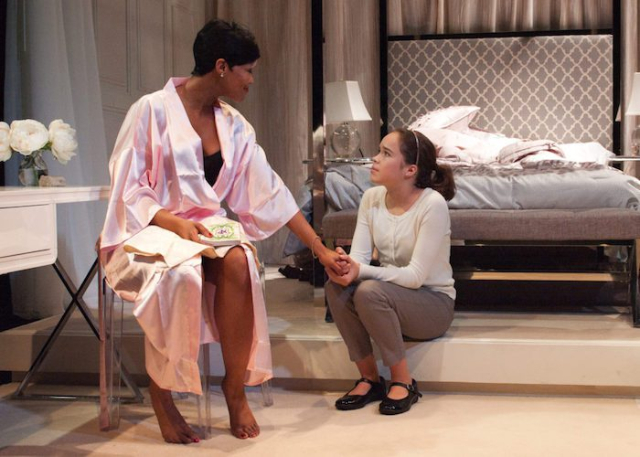 Henry VIII’s sixth and last wife is probably the one you don’t remember. She was Katherine Parr, Henry’s third Catherine, and a feminist before her time. Timeline Theatre’s new production of Kate Hennig’s play, The Last Wife, introduces her to us in a clever mix of fact and fiction. The modern staging and dress and the contemporary dialogue have the effect of clarifying and emphasizing the historical significance of Katherine’s role in the Tudor realm.

The Last Wife premiered last year at the Stratford Festival in Ontario and Timeline snagged it for its first US production. The 2.5 hour play is smart and funny and will have you turning on your phone at intermission to look at Katherine Parr’s Wikipedia page.

Smartly directed by Nick Bowling, the play is a good example of Timeline’s tagline: “Yesterday’s stories. Today’s topics.” The Last Wife addresses topics such as relationships between women and power, female education, war and empire.

Steve Pickering plays the aging Henry with vigor, wit and some sadness, while AnJi White as Kate or Parr (as she asks Henry to call her) is a sexy, savvy woman who knows her own mind as well as Henry’s bloody marital history.

The story begins just before Henry proposes to Kate and ends after his death and hers a year later.

Kate has been married several times and knows how a marriage should be structured. When Henry proposes marriage, she counters with lists of her own assets and demands a pre-nup contract. She wants to take the lead about when they have sex, but most importantly, she wants responsibility for Henry’s three children by three different wives.

Sweet Eddie, son of third wife Jane Seymour, is the youngest and will be Edward VI. Chinguin Sergelen played Eddie on opening night but Matthew Abraham performs on alternate nights. Young Bess (Caroline Heffernan and Peyton Shaffer) is a tween at the beginning and grows up during the play. Mary (Paola Sanchez Abreu), in her late 20s, is bitter and cynical about her father and her own place in the realm. Both daughters want to be called princess, but Henry refers to them as “The King’s Daughter, Lady Elizabeth/Lady Mary” instead.

Kate persuades the daughters to swear allegiance to Henry so that he will restore them in the succession to the throne. They both resist at first, but finally agree.

Bess asks, “Do you think girls are smart enough to run a country?” And Kate replies, “Girls are smart. They just aren’t legal.”

The much younger Edward is called Prince. Henry tells Kate, “I’ll give you anything you ask if you’ll see my son on that throne when I die.” Edward does become king at age 9 but dies six years later. Both Mary and Elizabeth, of course, later became queens of England—Bloody Mary and the Virgin Queen.

Thomas Seymour (Nate Santana), brother of Jane Seymour, is Kate’s sometime lover and friend. Henry suspects their amicable intentions and sends Thom off to the Low Countries. Kate and Thom are married after Henry’s death.

Bowling succeeds in directing this family drama with awareness of its power. The entire cast is excellent. Pickering is as always a delight to watch and White is a powerful protofeminist woman. The two youngest actors, however, are both a revelation. Both Sergelen and Heffernan are warm, smart and self-possessed.

Melissa Torchia’s costuming in modern dress is handsome and practical. The king wears dark suits, dark shirts and ties even as he goes off to war. The queen mostly wears a form-fitting light colored dress that shows off her upper body attributes (much admired by Henry). The robes, jackets and capes she occasionally wears function as modernized regal robes. Mary usually dresses in Goth black and Bess grows up from a tween in pastels to an older teen in jeans and jacket.

The scenic design by Regina Garcia is laid out horizontally with audience seating on both sides. The cleverly chosen furnishings and props are generically mid-century modern, with the addition of a large table and throne-like chair. A dressing room/bedroom area to one side can be easily curtained off. Mike Durst’s lighting design focuses our attention on the relevant scene. Victoria Delorio is responsible for original music and sound design.

Kate Hennig is a veteran Canadian actor and playwright. The Last Wife is the first of her Queenmaker Trilogy, which will include two other plays, The Virgin Trial and Father’s Daughter about Queens Mary and Elizabeth. Her writing is mature and intellectual as well as witty and spicy. She thoughtfully blends quotes from historical documents with her own conceptions of how the royals might have behaved in private.

The Last Wife continues at Timeline Theatre, 615 W. Wellington, through December 18. Performances are Wednesday-Sunday with two shows on most Saturdays. Tickets are $38-51 and can be bought online or by calling 773-281-8463.