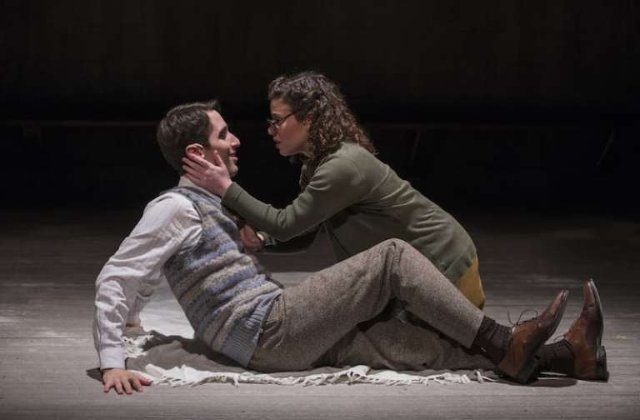 Theater history, immigration, censorship and persecution are some of the ingredients in Paula Vogel’s compelling play, Indecent, which just opened at Victory Gardens Theater. Gary Griffin directs a multitalented cast of nine with such style and charm that you may not notice that this story is weighted with messages from our past that still haunt us. Today, as we live in a time threatened with a new anti-Semitism, homophobia and rejection of immigrants, Vogel’s play is enthralling and troubling.

Indecent blends time-jumping scenes with an occasional dance routine and klezmer-flavored music. It’s a fine example of a dramatic play with music. The story and its characters are paramount and the music provides a lyrical underpinning. It’s an epic story told on a very personal level.

A highlight of Indecent is an enchanting love scene in the rain between two women, repeated several times in the play-within-the-play that Vogel dramatizes. It’s that lesbian love—plus the idea that an elder would operate a brothel—that scandalizes the New York audience when Sholem Asch’s God of Vengeance opens on Broadway in 1923.

In 1906 Warsaw, Madje Asch (Kiah Stern) reads the new play by her husband Sholem Asch (Noah LaPook) and declares it wonderful. They decide he must go to Berlin to seek the support of noted actor Rudolph Schildkraut. But first there’s a reading the next night at the home of the influential Mr. Peretz (David Darlow), who Madje declares “so 19th century.” The reading turns out to be a disaster. Asch asks the men present to read women’s parts. They declare it garbage. Only Lemml (Benjamin Magnuson), a third cousin from a shtetl near Lodz, agrees to read the poetic love scenes with Asch. This is a moment of truth for Lemml; he falls in love with the theater.

Despite this inauspicious start, the play is performed in Berlin with Schildkraut (Darlow) playing Yekel, a pious Jew who operates a brothel in his cellar and roars at his maker. Yekel’s daughter, Rifkele (Stern) falls in love with Manke (Catherine LaFrere) and thus the story begins. Lemml is deliriously happy as assistant stage manager.

God of Vengeance goes on to controversy and acclaim all over Europe. Griffin’s staging illustrates this in a series of scenes repeating the play’s climactic finale in Berlin, St. Petersburg, Constantinople, Bratislava and Istanbul. After those successes, Asch, stage manager Lemml and the whole troupe of actors emigrate to the U.S. The arrival is America is emphasized as the actors shed their shtetl clothes and do a kickline dance.

The play is first performed at the Bowery Theatre in the Village and then in Provincetown, where the text is censored to omit the lesbian love scene. Although there are protests from the actors, the changes stand and God of Vengeance moves uptown to the Apollo Theatre, where the trouble begins. On opening night, the troupe is arrested on obscenity charges. Indecent closes in 1952 Connecticut, where Sholem and Madje are packing to move back to Europe. He has received an “invitation” from the House UnAmerican Activities Committee.

Nine actors and musicians play dozens of characters. Magnuson as Lemml is the Stage Manager and narrator. The cast also features Cindy Gold as the Elder’s wife and Andrew White as Mendel. The actors are also musicians, with music director Matt Deitchman playing accordion, Magnuson playing upright bass, Elleon Dobias on violin, and LaPook on mandolin.

Jeffrey D. Kmiec’s simple set design features suitcases that provide costume changes (designed by Mara Blumenfeld). Lighting is by Keith Parham and sound by Christopher M. LaPorte. Projections are designed by Stephan Mazurek. Title cards are in English and Yiddish. Yiddish is often spoken and translated on projections, but most of the dialogue is in English.

Indecent had its world premiere at Yale Repertory in October 2015, followed by an off-Broadway run and transfer to Broadway in April 2017. Vogel, a renowned teacher of playwriting, received the 1998 Pulitzer Prize for How I Learned to Drive, a story of incest and sexual abuse. Her other plays include Desdemona, A Play About A Handkerchief (1993), The Oldest Profession (1981), And Baby Makes Seven (1984), Hot ‘N Throbbing (1994), and The Mineola Twins (1996).

Indecent continues at Victory Gardens Theater, 2433 N. Lincoln Ave., through November 4. Running time is 100 minutes with no intermission. Tickets are $29-$77.