On Site Opera with Argento and Berlioz 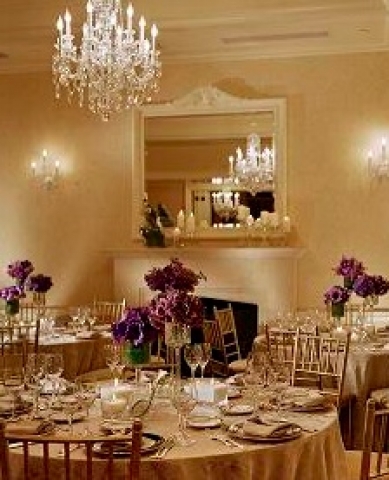 Set for The Death of Cleopatra and Miss Havisham's Wedding Night 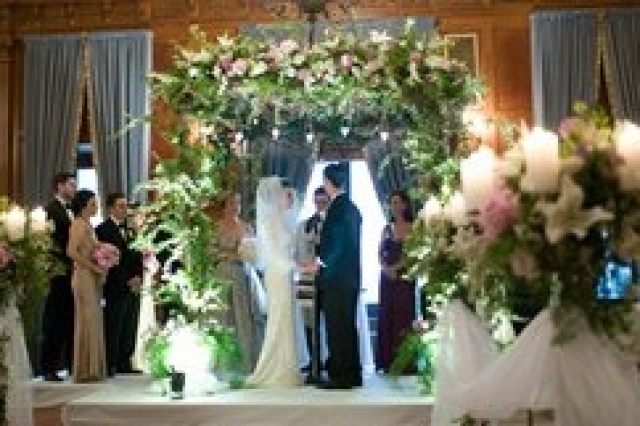 The wedding Never Happened at the Harmonie Club 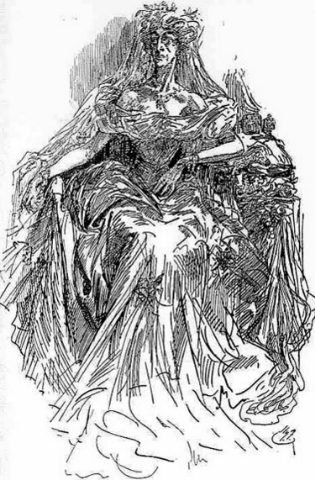 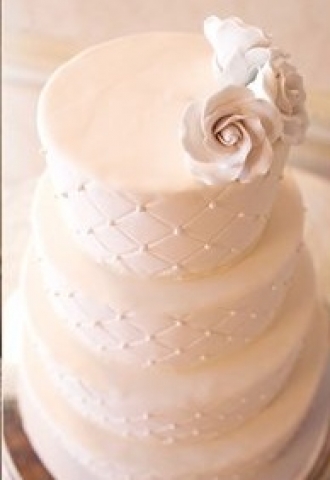 Opera seems like a piece of cake at the Harmonie Club

On Site Opera follows the long tradition of presenting opera in venues where its audience is comfortable.  Opera of course began in the palaces of royal families.  In relics of the 20th century, including 4000 seat opera houses like the Metropolitan, half the house's seats are often empty.

Yet in smaller, more intimate venues the opera form is hurtling into the 21st century.  Daring programs, intriguing productions and inventive new music are the order of the day and audiences swarm to these events.

On Site Opera likes to match the subject of an opera with its production location.  Its most recent production of two monodramas by Dominick Argento and Hector Berlioz took place in the Grand Ballroom of the Harmonie Club.  Queen Victoria would have liked it, and Prince Charles and Camilla would fit right in.

The room is a design of Stanford White. If there is an opera karma, this room has it before a note sounds. White's life was reality opera live.  He was shot and killed by Harry Thaw, the husband of White's lover, Evelyn Nesbit, 'the girl in the red velvet swing.  The murder occurred on June 25, 1906 at Madison Square Garden.

Now White's beautiful room, about 40 feet long and 60 wide with an alcove for the Sybarites orchestra, led by the talented music director Geoffrey McDonald, is the set for Cleopatra's death by asp and Miss Havisham's mad recall of the last minute rejection by her prospective husband.  All these ideas swirl and entrance at linen-covered tables with wine and champagne and a wedding cake yet to be cut.   The perfect setting for a superb evening of music and an experience that transports right over the top.

Cleopatra appeared first.  Swathed in gold, Blythe Gaissert. a rich mezzo whose voice is full of drama and ranges easily, moved with increasing urgency through the tables of the room.  This challenging setting seemed not to disturb the delivery of the gorgeous early Berlioz score.  Her dress costumed by Fay Leshner was almost as slinky as the asp.

McDonald pointed out that this was the first work that clearly bore the mark of Berlioz, whose innovative chromaticism and rhythms are challenging to instrumentalists and singers.  So too are the absence of repetition make unusual demands on the musicians. The realistic asp wriggling in Cleopatra's hands thrilled the audience.

The room was particularly designed for Miss Havisham.  Its high ceilings, the candelabra draped in the shards of time, and the elegant chandeliers all made Miss Havisham's position and her dilemma present. Leschner's layers of lace upon lace both suggested the wedding and the completely outdated sentiments of the heroine.

Leah Partridge is an exciting contemporary soprano who took on the challenges of the role composer Argento created for Beverly Sills. Partridge is not only a superb actress, but sings the wide interval leaps with seeming ease.  She completely captures Miss Havisham's instability, which recalls Ophelia and Lucia.  Opera is mad anyway.

Yet recitatives often are speech-like, lyric and clear.  Melodies reflect the shape of speech patterns.

The monodrama is divided into three pieces: Miss Havisham's recollection of her rejection, her collapse and then her acceptance. Partridge etches each emotion with a bold drama.  She is at once vulnerable, reflective, mad and bitchy. It is a glorious take on the character.

Led with both care and beauty by McDonald, the orchestration is a steady expression, connecting the coloratura trills with musical motives.

Conversation that followed between the musicians and the audience was easy and interested.  The setting seemed made for a comfortable interchange.

The Board of the Harmonie Club was anxious to arrange another performance for its members.  Organic audience building is the warp and woof of the On Site Opera's method.  They are experimenting with a production model to pursue into the future and have come upon one perfect mission.