In Your Arms at Old Globe 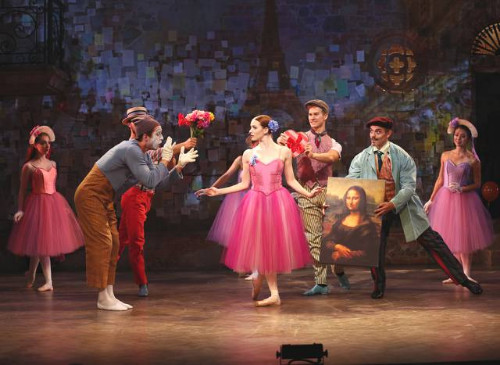 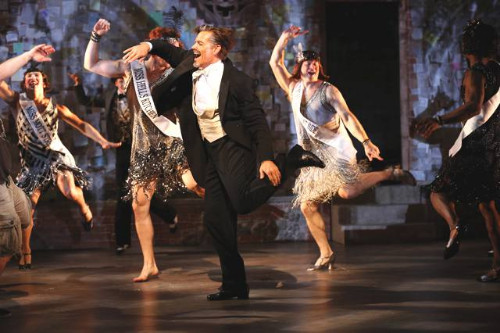 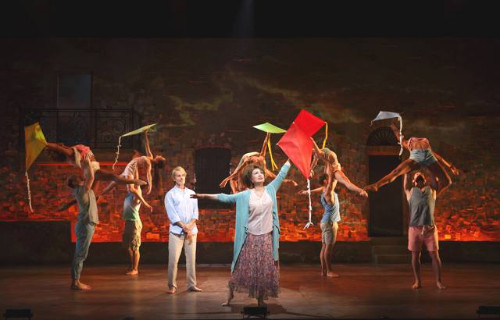 Don’t be surprised to discover that there are less than a half-dozen scripted words of dialogue spoken in the entire production of “In Your Arms”, the World Premiere dance-theatre-musical production that debuted at The Old Globe Theatre on September 24th.. This magical production, however, doesn’t need help of any kind in order to dazzle its audience.

It’s an exhilarating and enthralling production as rich in visual imagery and emotion as any 1000 page Victor Hugo novel, and it’s all accomplished without a single word of dialogue.

“In Your Arms” is the brain-child of brilliant choreographer/director Christopher Gattelli and Broadway producer Jennifer Manocherian.  Serendipity often plays a key part on how theatrical ideas become creative realities.  In 2007 a chance phone call from producer Manocherian to dancer/director Gattelli led to a collaboration for a then unnamed dance show to be developed.

Gestation periods for new show ideas can take up to years before giving birth.  Money, performer availability and schedules, and other variables always impact the project.  In the case of “In Your Arms” the co-conceivers bit the bullet and forged ahead anyway, contacting playwrights and writers asking them to create stories that would then become a series of free flowing vignettes; running less than ten minutes each and performed by a company of top-tier dancers.  Ten of Broadways finest and renowned writers made the cut with stories they wanted to share using just music and dance.

The evening opens with a classically performed ‘Prologue’ danced by Spencer Clark and Lyrica Woodruff, as the star-crossed young lovers in ‘Romeo and Juliet.’

“Love” is a leitmotif thread that is creatively woven and embedded into the tapestry of love won, and love lost, as danced by the company in all vignettes.

Broadway veteran and dance legend Donna McKechnie leads off the evening’s signature number “In Your Arms”, with music by Stephen Flaherty and lyrics by Lynn Ahrens, and performed with the company.

Let me list, in no particular order, the ten authors and the titles of their pieces brought to life by the gifted artists that comprise the company.

“The Lover’s Jacket” by Nilo Cruz features high-energy Flamenco dancers and lovers Glenda Sol Koeraus and Oscar Valero who become separated by political events set in Franco’s Spain.  If there is one dance that stirs the blood and the emotions to a boiling point; flamenco has to be it.  The vignette just sizzled.

“Lowdown Messy Shame” by Carrie Fisher is a screw-ball comedy (naturally) tale danced by Jess LeProtto and Samantha Sturm with Jenn Harris and the company.

“Love with the Top Down” by Alfred Uhry vibrantly celebrates young love and jalopies in Midwest America by perky Haley Podschun and energetic Brandon Stimson.

“A Wedding Dance” by Lynn Nottage takes place in Africa where two lovers: Marija Juilette Abney and Adesola Osakalumni exchange their wedding vows partly performed with an intricate shadow sequence; then seen in full creative choreography along with the company.

“Artists and Models, 1929”  written by Douglas Carter Beane, is a throwback number to the famous ‘drag show performers’ of the roaring 20’s; who let their hair down and camped it up at their annual glitzy A & M Ball.  Jonathan Sharp and Ryan Steele along with the company take charge with some fancy footwork.

“Life Long Love” by Marsha Norman is a bittersweet tale of three lovers who part only to meet again.  The poignant vignette features dancers Henry Byalikov and lithe Karine Plantadit with Stephen Bienskie who, not only recall their memories through dance but now realize each must make a difficult choice for their futures.

“White Snake” by David Henry Hwang, is an ‘East meets West’ vignette that is gracefully, lyrically, and traditionally danced by Alex Michael Stoll and Erica Wong.

“Intergalactic Planetary” written by Rajiv Joseph is a futuristic tale about an astronaut who meets an Alien female on a mission to a distant planet; who then desires to get closer to find out more about this statuesque creature. The space odyssey dance number is amusingly performed by Claire Camp and Jeremy Davis.

One will have difficulty in finding a more exciting and energy-filled 11 o’clock spot than “The Dance Contest” written by Christopher Durang, with lyrics by Durang.  The number is a beautiful, creative, exercise in precision movement with style and flair as the dancers perform the various prescribed genres required in all dance competitions.  The pairs are: Stephen Bienskie and Jenn Harris, with Henry Byalikov and Haley Podshun, and the company.

The penultimate vignette “Sand Dancing” by Terrence McNally is a sweet tribute to growing older, but still remaining true to one’s passion and one’s life long lover.  George Chakiris and Donna McKechnie perform this tender vignette with the company.

The signature number “In Your Arms” is reprised by McKecknie, with the entire company; bringing to a close a memorable and mesmerizing evening of music and dance that produced a standing ovation and several curtain calls.

Theatre in all its forms is a collaborative team effort.  A scintillating production like “In Your Arms” would be impossible to stage without the music which provides the dancers the precise timing they need to execute their steps and routines.  The pit orchestra under the baton of Music Director Steven Malone and Orchestrator Michael Starobin, play major roles in making the onstage magic happen.

The creative team led by the brilliant and innovative choreography/director Gattelli has Scenic Designer Derek McLane, render a large dance area that Lighting Designer Donald Holder, generously illuminates in order to see the costumes of Jess Goldstein.  One gets and appreciates the wide technical ‘tapestry effect’ that fills the stage with movement, color, and enchantment.

This astonishing and dazzling production performs on The Old Globe’s Shiley stage and runs through October 25, 2015. And by the way, one doesn’t have to a dancer to enjoy the production.  Don’t miss it.