The Bakelite Masterpiece by Kate Cayley 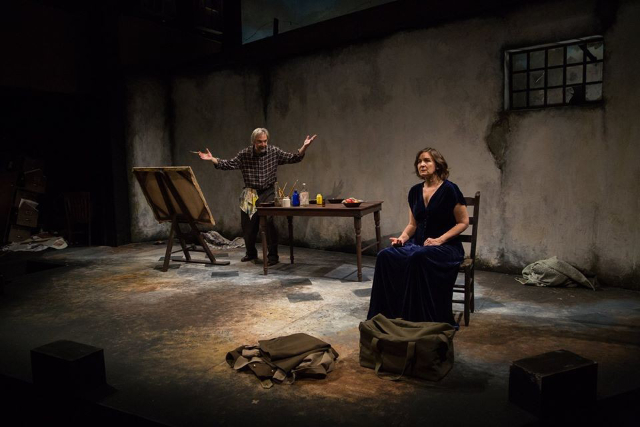 In this American premiere, brought to fruition by a collaboration between WAM Theatre and Berkshire Theatre Group, playwright Kate Cayley was inspired by a real life art forger, Han van Meegeren.

The play takes place in a jail cell in Holland at the end of World War II. Van Meegeren has been arrested for selling a painting of the Dutch Master Johannes Vermeer to the Nazi collector,  Hermann Goering.  Holland is in painful chaos suffering from many losses.

Van Meegeren is considered a traitor selling a Dutch treasure for profit.

As played by David Adkins we encounter him alone in a  jail cell.

Broken windows occasionally allow the chaos to enter, along with filtered light.

Enter Geert Piller, the painter's prosecutor and an art expert. As portrayed by Corinna May,  Piller is a stern, efficient and a quiet presence, anxious to execute van Meegeren for his betrayal. She aspires to provide  solace to Dutch citizens  seeking justice.

In contrast, Han van Meegeren as played by Adkins, is a rattled, jittery, and constantly moving morphine addict trying to prove his role as hero rather than traitor.

He claims, while consuming morphine pills, that the painting he sold to Goering was a forgery which he painted.  He should be hailed as a hero for duping Goering!

As he laments his lack of talent as an original artist, and boasts of  pleasure duping Goring, Adkins exudes the frenetic motion of a man desperate to prove the worth of his life.

He asks Piller to let him paint another Vermeer "Woman in the Blue Dress."  As Piller contemplates this, we see a sudden shift in her perspective. Will she bend to his request?

She does, and then we see Corinna May shift her character from rigid executioner to pliant model.  Her stillness remains, but there is a hope and yearning that emerges.

Van Meergeren reveals his painting's secret.  It is Bakelite which allows him to recreate Vermeer's old paints.

The set design, by Juliana von Haubrich, conveys both the solitary nature of the cell, and unrest outside.

Costumes, by Deborah A. Brothers, help show the roles in each character's life; especially when Piller changes from prosecutor to  model.

The audience is left with the quiet desperation of both characters.  One is trying to achieve immortality through his painting.  The other is seeking justice for unspeakable crimes. The intersection here is art.

Direction by Kristen van Ginhoven has conjured a thought-provoking 70 minute play with skilled performances.   It is a night of theatre you won't soon forget.