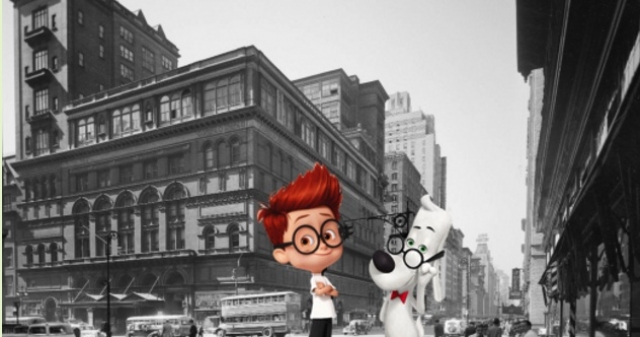 Two visitors check out Carnegie Hall (left) in the 1960s. Sherman and Mr. Peabody © Dreamworks Entertainment.
The science of time travel is not normally associated with the classical music business. And yet, one might argue that the finest time travel device in New York City stands not in some hidden laboratory but on the corner of 57th St. and Seventh Avenue. That's right, it's Carnegie Hall, whose 2017-18 season offers the intrepid listener a chance to travel between centuries and musical worlds.

This year, Carnegie's festival offering is 60s: The Years That Changed America. Not only is this a bold and defiant gesture of hope in the face of current political darkness, it is also a tribute to the revolutions: societal and musical that rocked America fifty years ago. The two-month festival features the Kronos Quartet, rock star David Crosby, the Philip Glass Ensemble and A Time Like This, a concert juxtaposing young hopefuls from the Weill Music Institute with today's biggest stars.
Glass is also Carnegie's Composer-in-Residence this season. As the legendary composer celebrates 80 years, the Hall will devote itself to his early minimalist masterpieces, including Music in Changing Parts, the rarely performed and highly athletic Concerto for Two Timpanists and Orchestra and the New York premiere of Mr. Glass' The Passion of Ramakrishna with the Pacific Symphony.

Oct. 4: Opening Night features the Philadelphia Orchestra under the baton of hotshot conductor (and soon to be Metropolitan Opera music director) Yannick Nézet-Séguin. He will be offering a Leonard Bernstein sandwich: music from On the Waterfront and West Side Story.

The meat: Gershwin's Rhapsody in Blue with pianist Lang Lang.  Maxim Lando will join him. The Philadelphians return on Dec. 8 to play Sibelius.

Oct. 20: The Orchestra dell'Accademia Nazionale di Santa Cecilia (whew!) will appear under the baton of Antonio Pappano. They will play two big works by Respighi and offer the Prokofiev Third Piano Concerto with soloist...wait for it...Martha Argerich.

Nov.14-15: With pro-Ukrainian protestors on 57th Street, the Mariinsky Orchestra takes the stage of Carnegie Hall. Valery Gergiev will lead both concerts, the second of which features the Piano Concerto No. 1 by the brilliant young pianist Daniil Trifonov.

January 17-18 starts the orchestral year right with the Royal Concertgebouw Orchestra under their new boss Daniele Gatti. He leads music by Wagner, Bruckner, Bruch and Mahler in two concerts.

January 21 is an evening of chamber music, with Janine Jansen and Jean-Yves Thibaudet collaborating on works by Debyssy and Grieg. Then they will play a rarity: a Concerto for Violin, Piano and String Quartet by the French Romantic Ernest Chausson with the Dover String Quartet

February 9-10 brings the long-awaited return of the Chicago Symphony Orchestra under Riccardo Muti. The fiery Italian maestro will offer a mixed grill of Stravinsky (more!) Chausson, Britten and a new concerto by Jennifer Higdon. The second night features a new piece by composer Samuel Adams and the Brahms Second Symphony.

Opera lovers will be happy with the spring programming for next year. March 29 brings a complete concert performance of Der Rosenkavalier under Kirill Petrenko with the Bayerische Staatsorchester and a stellar cast.

On May 4 and 5, the Bavarian Radio Symphony Orchestra blows into town under the baton of Maris Janssons. This astounding ensemble will play a program of Rossini, Prokofiev and Beethoven on Night One and then take on the challenge of the Mahler Seventh on Night Two. (Reprinted from Superconductor with permission)