The Homecoming by Harold Pinter 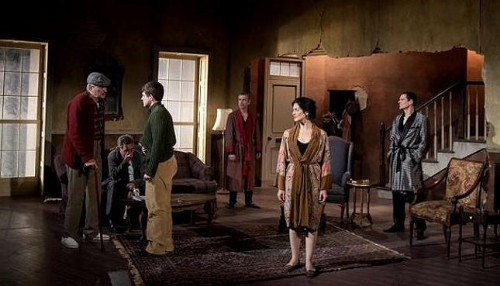 Superbly directed by Eric Hill with a brilliant cast this is a difficult and challenging evening of theatre. Particularly off season companies tend to program farce and accessible, heart warming plays. Bravo to artistic director, Kate Maguire, and BTG for going for the jugular.

In two acts this astonishing production has its hands on our throats squeezing the life out of our deepest and darkest, closeted empathy for the primarily degenerate and despicable characters representing the most outré and ravished notions of family.

As a playwright, Pinter takes us deep into the darkest recesses of the tortured soul of the human condition. It probes the notion that we always hurt the ones we love. Our most monstrous and maiming impulses are too often inflicted on those closest at hand.

An evening of Pinter comes with an implied disclaimer that we agree to be brutally abused. We stagger out of the theatre in need of the triage of recovery. Conversations focused on analysis and unraveling the how and why of what we have experienced. During our hour long drive home Astrid and I intensively discussed and debated what we had been subjected to. It is the kind of evening that is slow to leave the psyche.

The play belongs to the Dionysian tradition from Dante’s Inferno, to Beckett and theatre of the absurd- the bleak emptiness of Waiting for Godot, the ennui of Endgame- or perhaps the existential No Exit of Sartre.

The playwright belongs to the glass is half empty school of drama. In plunging the Lower Depths of Gogol or Dostoyevsky the process evokes a deeper understanding of the human condition and its quick trigger finger for chaos and mayhem.

Well not quite. There is artifice and cunning in the manner that the characters, with varying degrees of success and failure, ruthlessly pursue self interest and raw survival. The ultimate corpse at the end of the play is not just Sam, dropped dead on the living room floor, but an analogy for the emotionally decimated audience.

How utterly marvelous. If, and here’s the thing, you are in the mood for getting slogged about like an emotional rag doll.

What set Pinter apart from theatre of the absurd and the classical tradition of the Dionysian was the use of deceptive realism. The many, seemingly authentic, aspects of the characters lure us into thinking that the absurdism we witness is perhaps plausible. There may in fact be families in North London as vicious and primal as this. It’s at least possible.

The shabby details of the evocative set by Reid Thompson conveys the run down home where Max, a retired butcher (Rocco Sisto) lives with his brother Sam, a chauffeur (John Rothman), and two stay-at-home sons, a hustler Lenny (Joey Collins) and a wannabee boxer Joey (Rylan Morsbach).

Setting the mood are interludes of ballads performed on solo bassoon by the great jazz musician Eric Dolphy. It was such interesting and wonderful music to bookmark scenes and transitions for the play.

In the shabby living room Lenny is reading the paper and mostly ignoring the attempts at conversation, including those signature Pinteresque pauses, with his father. There are occasional responses with the contemptuous over emphasis of the word Dad. He acknowledges, but appears to have nothing but scorn for his father. These characters hate everyone around them including themselves.

Sam dressed for work enters and hangs up his chauffeur’s cap. He conveys pride in his job and states that he is the driver most in demand from high end customers. A recent client has given him a box of cigars as a tip. These become a prop and plot point as they are confiscated and shared.

Taking the screed of abuse from his vitriolic brother Sam seems timid and benign. The characters are arranged in passive and aggressive duets. In that trope the smarmy Lenny is best matched in battles with his father.

They are all living together out of convenience and necessity. Scraping together meager incomes they manage to keep a roof over their heads and food in the kitchen. There are battles about who cooks and does the washing up.

Late at night Teddy, a professor of philosophy (David Barlow), and the mother of his three sons Ruth (Tara Franklin) arrived unannounced. The smartest and most successful of the bitter brood he escaped to a career of teaching in America. As a side trip to a vacation in Venice he has decided to introduce his wife of nine years to the family. The old key works and they have just moved in and claimed his old room.

In the morning Max, in his usual foul mood, demands who will fix him a nice breakfast. It seems he has no domestic skills. His saint/ whore of a dear departed wife took care of all that.

When his long lost son and a woman enter Max unleashes a tirade. He accuses Teddy of bringing home a whore to desecrate the memory of his wife. She takes this attack with stoic, one might say, cool reserve. Partly because as events unfold, she is, a whore that is.

The woman is surrounded by a ravenous pack of rapists and misogynists. Which seems more to attract than repel her complicity. Pinter water boards our notions of chivalry and respect for women. We resist playing along and become ensnarled by this ravenous devolution. It works against our instincts for decorum and decency cutting back to the law of the jungle and Darwinian survival.

It evokes Hobbes vs. Locke notions of mandates for an orderly society.

It is comic when Max, evoking his sainted whore of a wife, states that she taught her three sons about humanity and the ethics of right and wrong. Considering the results of that motherly education all we can do is pathetically laugh.

In this array of tyrants and weaklings we are challenged to be honest about which of the characters we most readily resemble and identify with. Pushed to the brink there is some of them in many of us. Pinter holds a mirror up to our wretched instincts.

Having bashed our heads against the wall for two acts there was a wonderful sense of relief from suffering when the play mercifully came to an end. The applause was richly deserved.

Enjoying opening night snacks I was asked what I thought of the play by a volunteer.

“Pinter is a sick fuck” I said to her. The brutal impact of the play gave me license for such invective in the spirit of Mad Max. Then I added “But I loved it and wouldn’t miss it for the world.”