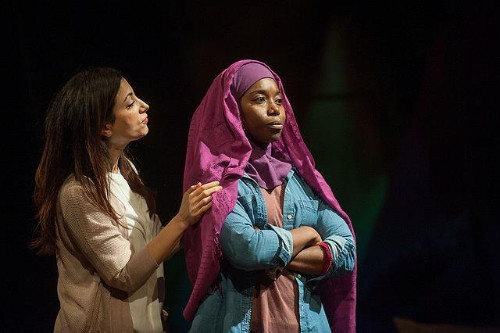 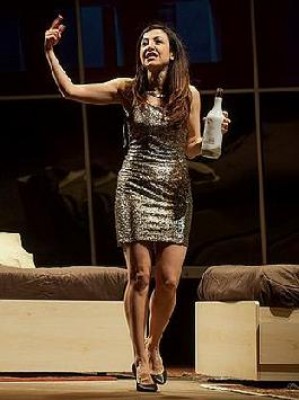 Samar in party mode before the sobering events of the Arab Spring. 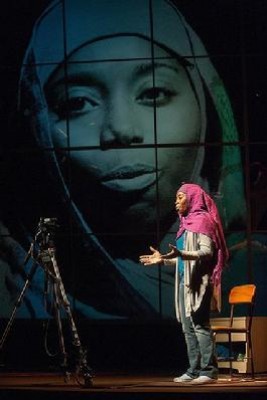 A compelling scene where Intisar explains why she wears a veil.

For its community and education-based fall program Barrington Stage Company is presenting the topical, award winning Veils by Tom Coash.

Part of the outreach for the production includes three matinee performances earmarked for regional student groups. Making opening remarks Julianne Boyd, the artistic director of Barrington Stage Company, thanked sponsors including Berkshire Bank and announced that two of the three special events have been sold out.

Teaching diversity and in particular anti-Islamic phobia, including unwarranted attacks accusing President Obama of being a Muslim, is much to be applauded.

Our nation was founded on the concept of freedom of religion. Yet the African American, Republican candidate for President, Ben Carson, has stated that a potential president, a “veiled” attack on Obama, should not be a Muslim.

This is indeed fertile content for drama. This is not the first such play. It is also a familiar theme of television crime shows.

In the fear that gripped the nation following 9/11 a Sikh was pulled from a train and interrogated while another was killed at a gas station. It seems that wearing a turban and ceremonial knife targeted Sikhs as terrorists.

Making this the theme of BTG’s fall educational mandate is commendable. For an audience, however, it must be a compelling experience of theatre.

For a variety of reasons Veils proves to be problematic.

As a two-hander the play needs the intimacy that would have been more welcome in the smaller St. Germain Theatre. On the main stage there is just too much space diminishing the impact of the performers, Donetta Lavinia Grays (Intisar), and Hend Ayoub (Samar).

There is a minimal use of props comprising the set. Some items of furniture define a dorm room, school editing room, and hotel room.

Behind them is an enormous, multi paneled, digital projection screen. It has been stunningly designed by C. Andrew Bauer. The imagery augments the action of the play as, for example, when Intisar arrives at the busy Cairo airport and is picked up by her new roommate Samar.

During the second act, in the most compelling scene in the play, indeed its raison d’etre, Intisar looks into a video camera and explains why she wears the veil. Her face is blown up on the screen and completely absorbs an enthralled audience.

It is significant, however, that the drama needs that kind of special effects booster to get across its didactic plot points.

Reversal is one of the most important aspects of drama.

Arriving in Cairo, for a year focused on learning Arabic and the study of Islam, Intisar has asked for an Egyptian roommate. In bunking with an American there is a shared ambition on the part of Samar to absorb their cultural differences.

The trope, however, is that the American is more traditionally Muslim while Samar is thoroughly westernized. Instead of a veil she wears a Yankees cap and like to drink, dance and hook up in the lively club scene.

Under Sharia rule girls are forced to wear the veil and denied access to education. This is what Samar is rebelling against. While Intisar states that she wants to wear the veil and does not feel oppressed by doing so. It is what Koran expects from a devout Islamic woman. Sharia states that the wife of the Prophet, a widow and successful camel trader, did not wear a veil.

Rightly Samar explains to Intisar that she is a true Muslim but does not want to be bound by medieval rules. In a frank discussion of sex, for example, she explains that there are a lot of ways to remain a virgin and still have a good time.

There is even a humorous reference to surgical repairs. For hip young Egyptian weddings that entails a designer gown and “Hymen reconstruction by Gucci.”

It is that kind of dialogue, particularly in the first act, that I find too obvious and frivolous. The compare and contrast of their traditional vs. progressive approaches to Islam are too black and white where a deeply felt gray would be more plausible.

The youthful energy of the actors will surely appeal to the young target audience. These are young ladies acting out exactly as one would expect in a college dorm. Isn’t it the norm for roommates to struggle with differences? Particularly when the playwright has opted for such stark, day and night contrasts.

During the first act one is wafted along by the sanguine energy of the two actors. There is a compelling naturalism in their performances that makes one fully understand their very different personas. Ayoub brilliantly intersperses elements of dialogue in fluent Arabic. She teaches these phrases to her eager-to-learn companion. On her part Intisar interjects some of her homey, Philly slang.

In the second act it gets dark and more intense.

The frivolous Instisar gets caught up in the first peaceful demonstration that escalated into the Arab Spring. In a niqab, or concealing full body garment, Intisar has demonstrated with the traditional group.

Both girls have been injured. Intisar was struck by a rock that may have been thrown by Samar. Arrested Samar has been brutally “examined” by an army doctor before laughing soldiers. Her honor has been compromised.

By the conclusion of the play the reversal is complete. Samar has been radicalized and Intisar is more tolerant of the culture of a nation where she is a “guest.”

We left the theater with much food for thought. That may be more insightful and stimulating for a young audience the production has targeted.

For Americans who were of age during 9/11 their minds are made up. After Carson’s inappropriate remarks he reported a dramatic rise in donations and increased poll numbers.

It will take more than agit-prop theatre to make a significant impact on the racism and intolerance that is so deeply rooted in our ever more divided nation.