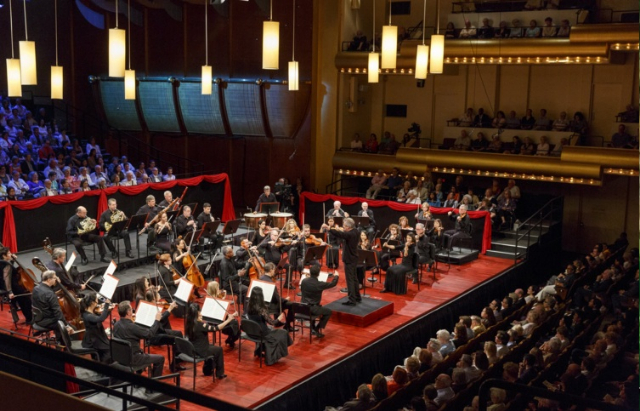 What it takes to make good sound in David Geffen Hall: The stage thrust out into the orchestra, 16 discs on the ceiling, some of the audience seated on the stage. These small efforts make a Hall with poor acoustics into a sound marvel.

The sound at David Geffen Hall during the fall and spring seasons is often awful.  A six hundred million dollar plan, which would have brought the Hall to Lincoln Plaza level has been abandoned.  Now there is talk of Mostly Mozart-ing the Hall.

At a recent concert, this commentator remarked:

Duo pianists Katia & Marielle Labèque performed a new duo piano concerto Philip Glass composed for them.  Old problems of the Hall made it impossible to hear the pianists.  Then came an kind of ersatz Mahler, with the tuba booming and all instruments on the stage playing at once and drowning out the pianos.

The performance of Mahler's Fifth more than made up for the Glass. Yet acoustic problems remained.

As the first movement begins, there are the beautiful, clear and dynamically controlled trumpet notes ringing through the hall.

Van Zweden early on makes clear that he can embrace all of the composer's feelings and notes and shape the parts and phrases.  How he makes the sections sound at once crisp and yet deliciously dramatic may be something we never figure out. It is the secret of his art.  Part of the pleasure is in phrases where the top note is held or withheld, as though a breath were being taken.

He can at once bring the orchestra to a frothy delirium of sound and then almost instantly retreat to quiet.

Clearly the Philharmonic has found a gifted new leader who appeals both to its instrumentalists and the audience.

Now the acoustic problems of the Hall must be addressed. There are six French horns who have spectacular parts in the Mahler and could barely be heard. Violins were sometimes out of tune, not because they can't play in tune, but because they can't hear themselves.

Without throwing money yet again at the problem, the solution has been suggested by the Mostly Mozart Festival, where the sound in Geffen Hall sounds very good indeed.  Audience is seated on the stage.  The orchestra section has been reduced in size.  There are large discs hung from the ceiling above the orchestra.  The sound is excellent.

To be sure, a Mahler orchestra with 106 players on stage won't work in this configuration. Adjustments could be made.  Why doesn't the NY Phil management take this project on as a signal of their appreciation of the electrifying new conductor they are lucky to have in their midst.  It won't cost anything.