Boulez at the Park Avenue Armory 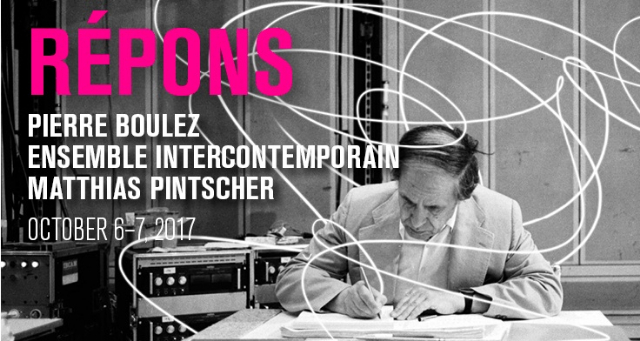 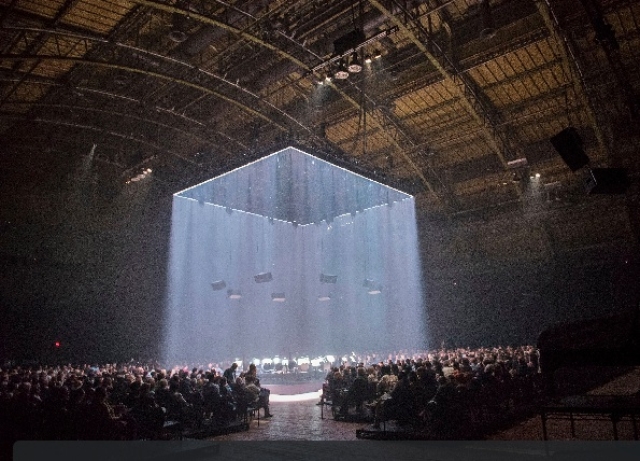 Sheets of light surround the orchestra 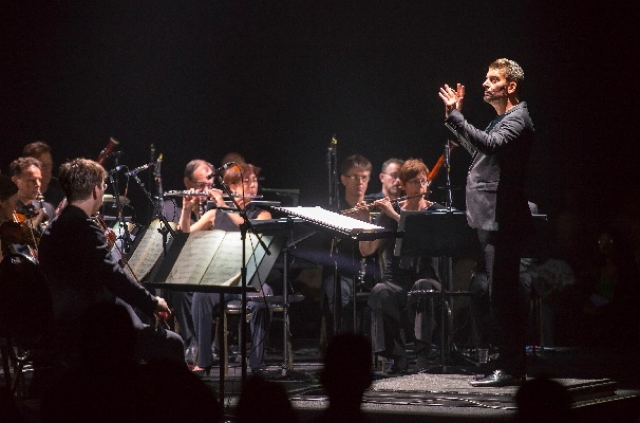 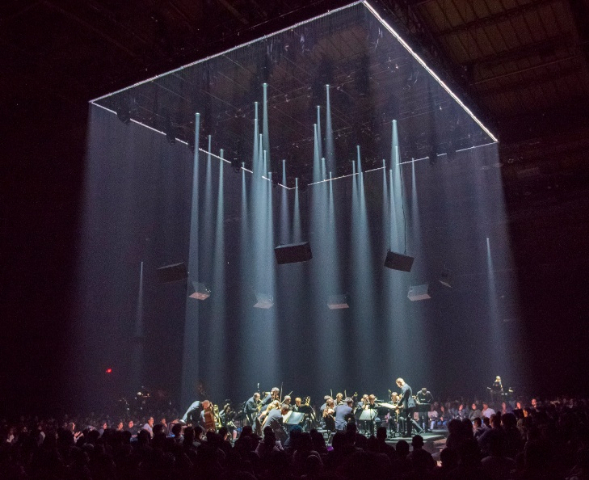 Spots focus on the Ensemble 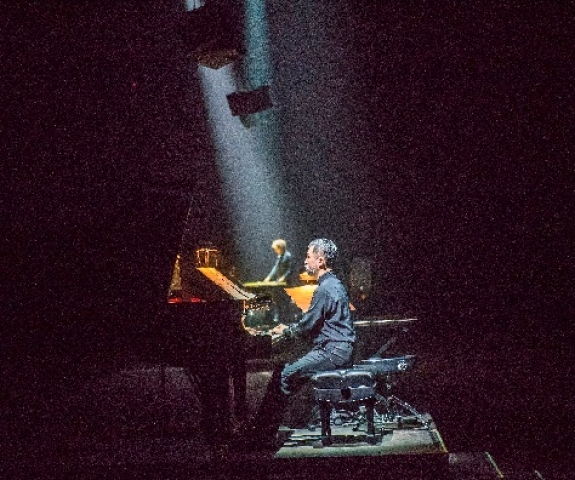 Instrumentalists at the edge. Their sound is processed in real time. 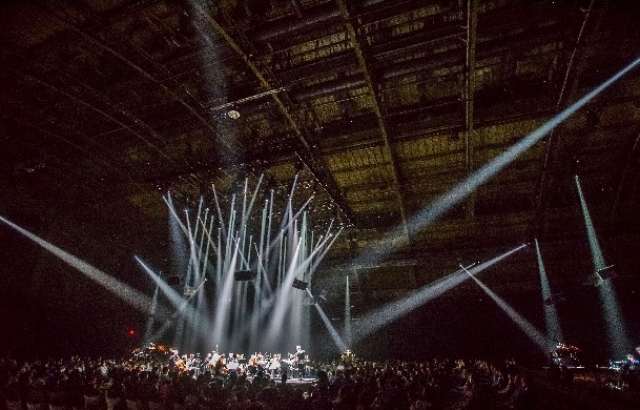 Light brings the visual into limited space as the music spreads out. 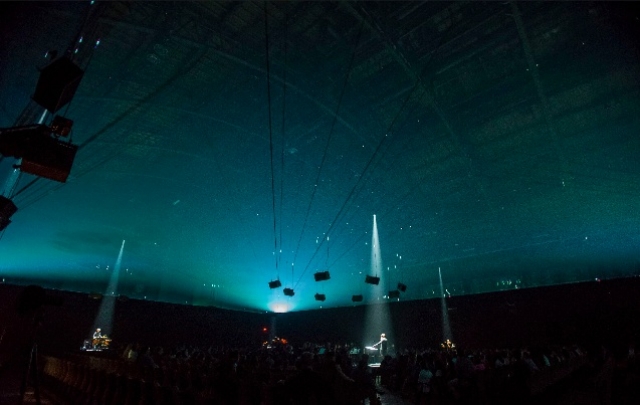 Winding down is bathed in a green-blue.

The Park Avenue Armory is presenting one of Pierre Boulez’ signature compositions, Repons, the first work to use IRCAM and all its innovative tools.

Boulez induced the French President to underwrite IRCAM, Institut de Recherche et Coordination Acoustique/Musique near the Pompidou Museum. This space, devoted to experimentation and concerts, is a mecca for contemporary musicians. Even the walls can be adjusted to spin off sound slowly or in a minisecond.

In Repons relatively simple material acquires sophisticated layers without losing the sound of its origins. Scored for chamber orchestra and six electronically modified solo instruments, two pianos, a harp, vibraphone, glockenspiel/xylophone and cimbalom,  Repons is a wide-ranging response to a single aural image. A succession of spiraling echoes sometimes follow each other, like classical images, and are sometimes simultaneous or vertical and sometimes spread out horizontally. Imitation, multiplication and superimposition are well-served by the computer.

Haze particulates fill the air in the Drill Room of the Park Avenue Armory. As you enter to sit for the initial performance of Repons, the square stage area on which the conductor and orchestra will perform seems to be enclosed in a four-sided scrim, separating audience and musicians.

In fact it is created by light directed through the particulates. The scrim has an other-worldly feel and reminds us that for a long time the Church had a monopoly on entertainment. All ten channels were under ecclesiastical control.

In a subtle lighting shift, the scrims disappear and spots from the eighty-foot high domed ceiling shine down on the stage area, and also the six solo instruments positioned throughout the Room. The lights origin feels heavenly. Particulates give the beams a contained, elongated cone shape.  Pierre Audi created the curiously quiet yet thrilling mise-en-espace and Urs Schonebaum launched the extraordinary light experience.

Repons means response, a classic form of communication in the Christian church.   For Boulez, it probably referred to this, and also to the many other functions of response, a reaction to almost anything. Perhaps to the music of the past. Or to new sounds created by the classic 4X computer synthesizer used in IRCAM.

This piece had been performed at the Columbia University gymnasium decades ago. In 2003, Boulez himself conducted at Carnegie Hall, where the solo instruments were placed at orchestra level. Boulez always preferred that the audience also be on this level, where the sound he was going to deliver was directed.  Repons was performed at a gym in Newport, Rhode Island last summer.

Park Avenue Armory offered two successive performances of the piece.  The audience was moved from one angle of vision to its opposite.

At first, I looked into the face of the conductor, but the backs of the back row of instrumentalists on stage. The second position, facing the musicians, was more satisfying. Then I could watch David Fulmer in the chair of what appears to be first violin, focusing his entire body on performance, plucking, strumming and bowing his instrument. Some of his bow’s hairs went flying, but he was unperturbed and set the string tone for the piece.

Opposite him were a pair of flutists, Sophie Cherrier and Emmanuelle Ophèle, who had piccolos at the ready. You could clearly see their striking lip movements, some of them very awkward and abbreviated in the often jugular phrasing the composition demands. This helped to hear.

Surely this piece is about hearing music in space. Boulez spent a lifetime listening and trying to ferret out meaningful sounds. When he conducted, he had a cool presence. Not so Matthias Pintscher, who invigorated the Ensemble Intercontemporain, and who listened carefully to instrumentalists positioned in the Drill Room's outer reaches. Their notes were immediately reflected sounds, processed in real time by synthesizers, which could both announce and meld with the Ensemble.

Some have asked if you could hear a mistake if one were made. Because portions of the composition are written loosely on paper, 'mistake' may have to be redefined. Others say that if you play two Boulez compositions at once on Youtube, you think you’re listening to one. The bottom line is that this music pleases. It excites and delights. Like much successful contemporary music, it is often saved by the bells, the tintinnabulation of the piano’s upper registers, the xylophone and the glockenspiel. These are abundantly present in Repons. The church has always used them.

At the Park Avenue Armory, through first and foremost the music and then its production in real time, in a grand space lit magically, almost with religious fervor, we hear important music of our time which not coincidentally delights. Lighting calls attention to itself just once, as the six solo instruments crash into the orchestra about seven minutes into the piece. Then the lighting dramatically changes. And at the end, we are in the dark, to sink into this irreverent and tantalizing moment.