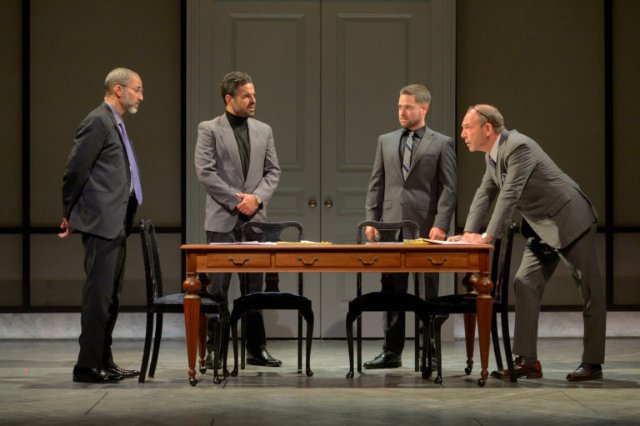 Plays that record history are tricky. The audience knows the outcome. Those that succeed often rely on the suspense of a back story unknown to the audience. So it is with the compelling Oslo, which details the events leading to the historic Oslo Accord of 1993, the first mutual recognition of Israel and the Palestinian Liberation Authority and first step toward lasting peace. Marin Theatre’s rendering informs in a fast-paced, suspenseful, if too long, presentation that makes compelling drama out of history.

History, as most of us know it, celebrates the achievements of great public figures. In this case, Israeli Prime Minister Yitzhak Rabin and PLO Chairman Yasser Arafat represented their peoples, sealed the document, and spoke the words on the world’s stage that are identified with the historic signing. What the world doesn’t realize is how little they were involved in an unauthorized, back-channel process that led to the accord.

In the early 1990s, Terje Rød-Larsen, the founder of a Norwegian institute concerned with political conditions around the world, shares an idea with his wife, Mona Juul. What if the Americans have it wrong? Their idea is that each side in a negotiation have a phalanx of experts mobbed in a convention hall and plod through months and even years of impersonal debate over minutia. Terje had spent much time in the Middle East and had great affinity for both Israelis and Palestinians. What if he could get single leaders from each side to engage with each other as individuals?

Oslo takes us through the process. With the exception of Shimon Peres, a late arrival to the plot, the characters will be unknown to virtually all theater goers. Terje is played with nervous energy and dramatic gesticulation by Mark Anderson Phillips. Convinced that a skunk-works cadre of Norwegians can bring implacable enemies together, he enlists Mona, a career foreign service officer, as his partner. Played with controlled enthusiasm by Erica Sullivan, Mona acts as modulator to Terje’s excesses, and in a theatrical device, also acts as a narrator, often speaking to the audience from under a spotlight. Some viewers might find this a distraction that disrupts the flow of the proceedings, but it is an efficient way to fill in gaps.

A risk of this type of production is that it can lapse into a staid documentary-like droning of facts. Oslo is anything but that. Raw emotions from historic grievances on both sides spill over into shouting and even a shoving match. Coarse language and threats occur within the Norwegian contingent as Terje tries to win over skeptics and adversaries. Slapstick humor occurs as when Terje and Mona are on two adjacent phones talking to the two delegations and swapping them back and forth.

The several rounds of face-to-face negotiations between the adversaries is often tense. Endless sticking points mire progress. Ultimately, the lesson is that negotiation success comes not over reams of data and whereas clauses, but trust and bonding over waffles and daughters named Maya – and a skosh or more of whiskey. Strategic lies often help as well.

The production works well but needs some work. Overtalk dialogue abounds, though there are a number of occasions that it seems unintended. Particularly in the early going, some actors were groping for lines. Presumably, these glitches will be corrected. Otherwise, characters are well delineated and dialogue puts them in sharp focus.  Fourteen actors play their parts well.

One complaint about Oslo that may be heard is that we already know its outcome. Twenty-five years beyond, notable progress has been made, but the condition between Israelis and Palestinians remains sad and unresolved. But do we really know the outcome? An anecdote in the play is told about Mao Tse Tung in which he is asked what the most significant result from the French Revolution was. His reply – “It’s too early to tell.”

Oslo by J.T. Rogers is produced by Marin Theatre Company and plays on its stage at 397 Miller Ave, Mill Valley, CA through October 21, 2018.