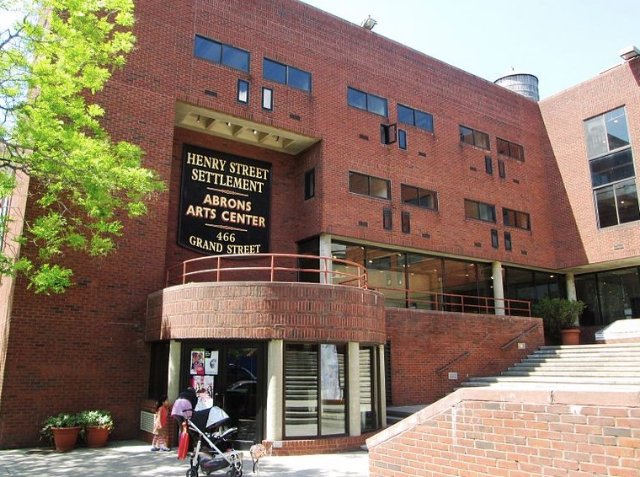 The Jazz Singer at the Henry Street Settlement

The Abrons Arts Center at The Henry Street Settlement is presenting Jazz Singer an musical drama by Joshua Williams Gelb and Nehemiah Luckett. It is produced by Frank Nicholas Poon and associate Catherine Taylor.

The film Jazz Singer, produced in 1927 was the first feature length film with synchronized dialog. Written by Samson Raphaelson, it told the fictionalized biography of its star, Al Jolson. A rags to riches story of a Jewish immigrant who success tears apart offers a broader window on America.  The singer is forced to choose between his Broadway debut and his father's dying wish that he sing the Kol Nidrei at Yom Kippur in their synagogue in New York. At this moment of truth, the actor puts on blackface. This is his mask in which to face the glittering white lights of his Broadway debut.

Gelb and Luckett use this unspoken juxtaposition as a deep rooted metaphor for America's biases.  Denial of self is magnified. We are in a studio as their cast prepares to recreate The Jazz Singer as a play. The set begins as the bare gutted space of workshop and rehearsal. Its wires, turntables, stray chairs offer seemingly unplanned audio interruptions. They create a sentient experience of the intellectual conflicts and chaos.

The collaboration of scenic consultant You-Shin Chen, Video /Projections designer Lianne Arnold and the Sound Engineer Marisa Arellano are beautifully orchestrated by Gelb. We move from thought to reality as the drama unfolds. Set becomes setting. The very interesting work of lighting designer, Marika Kent and projections and video, allow us to step into the film. Supportive props and costumes by Zan Vailento and Rodrigo Munoz, move us with the actors. Our protagonist shares his masked 'hiding place' with a black man who himself is asked to put on blackface.

The use of black face shocks modern sensibilities.  It once was an “accepted” masquerade that both defined and permitted black entertainers to be applauded by white America. The Jewish singer puts on the burnt cork which defines him as a white man. He is not a black man but may sing as if he were a black man. We must ask ourselves what do these layers of untruths actually mean?

This rendition of Jazz Singer is not a song and dance routine. With input from dramaturgist Zhalon Levingston, assistant director Johnny Loyd and guest artist curator Alphonso Horne, Gelb has built a charming deconstruction of the original film. Its contradictions unfold gracefully, becoming integral to the artistic vision. Music remains central to this piece. As Luckett's piano and versatile voice moves us from minstrel standards through blues and into the Kol Nidrei we hear the cries of the oppressed.

Christine Pitter, Joshua Gelb, Nehemiah Luckett and Stanley Mathbane are the performers who bring the piece to life, not only as actors but as musicians, singers and witnesses to the process itself. Pitter plays the women in the jazz singer's life, sister, mother, colleague, girlfriend. Each in their own way is without voice. One man's dilemmas has forced their aspirations into the shadows. Pitter gives them voice, and does so elegantly.

Gelb and Luckett do more than put on a good show. They ask us to look within the iconography and stereotypes within the original film as props for the American story. The Henry Street Settlement's Abrons Art Center is the quintessential stage for this piece. A theatrical venue that reforms and reshapes itself to respond to an ever changing neighborhood demographic it is both old and new. The old playhouse in which the play was performed was built in 1915. It stands a block away from the historic Bialystoker Synagogue which opened in 1905 in a building originally built in 1826.  The building was reputedly a stop on the underground railroad. The historic mission of the Henry Street settlement and of Abrons Arts is one of self definition, mutual understanding and social response. Within this context, Gelb and Luckett ask us for more than applause for a well crafted production. We are left to reconsider those masks that the marginalized must wear on the road to success.