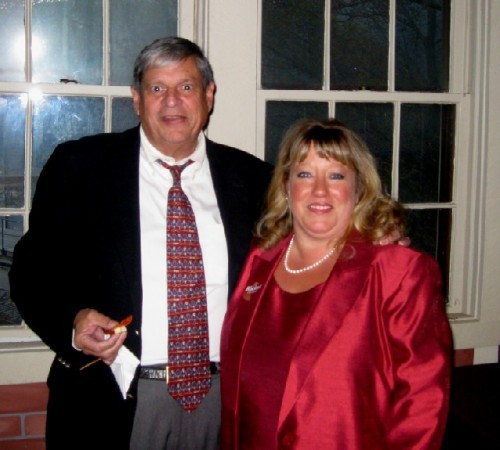 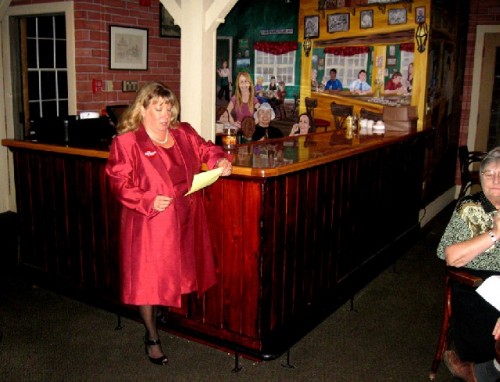 Blackmer speaking to her supporters upstairs at the Freight Yard. 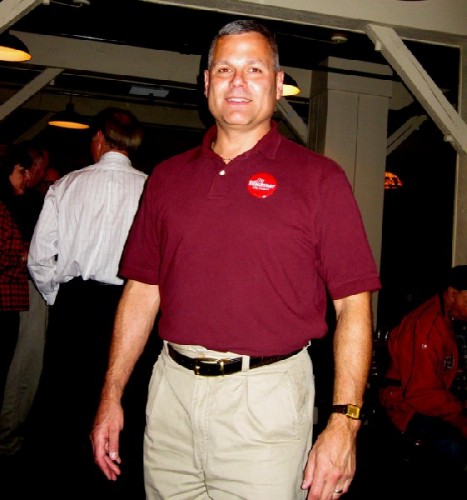 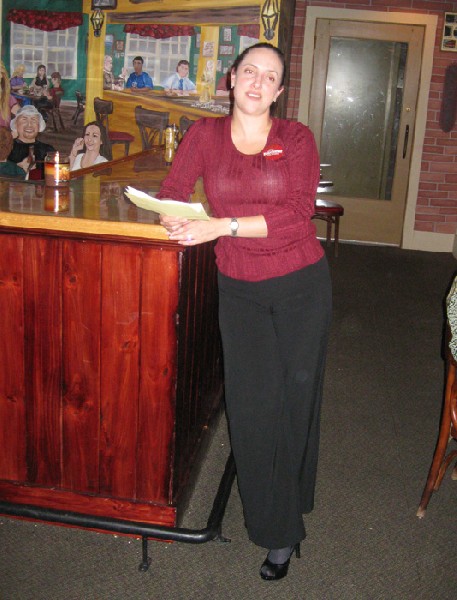 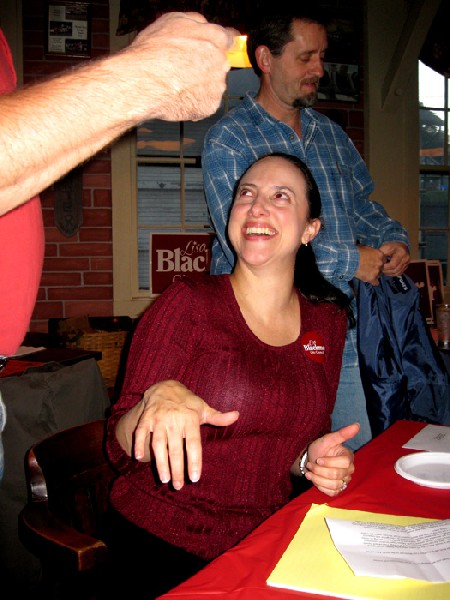 Michelle was signing up volunteers for Blackmer. 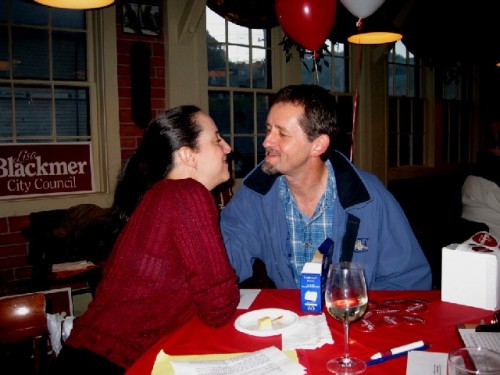 Michelle and artist Vin Jensen will tie the knot this month. 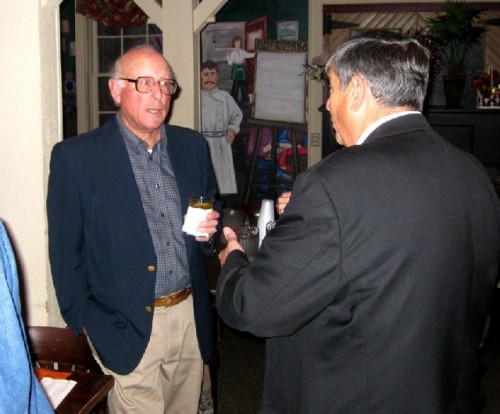 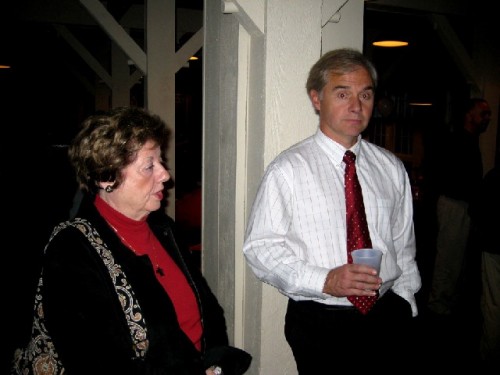 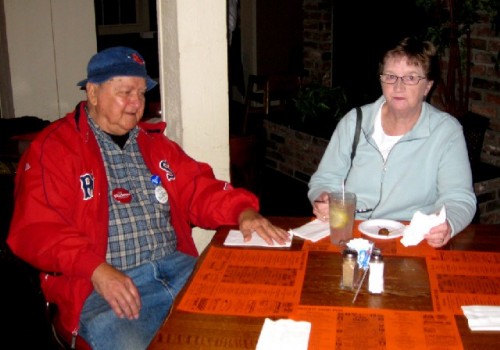 Turning out to support the candidate. 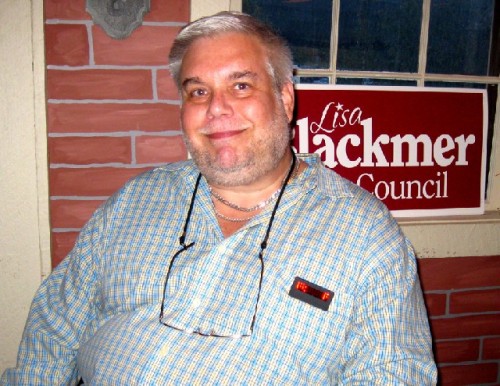 He programmed his own digital campaign button for Blackmer. 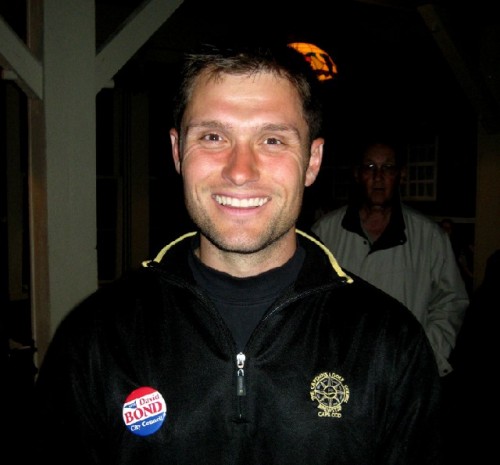 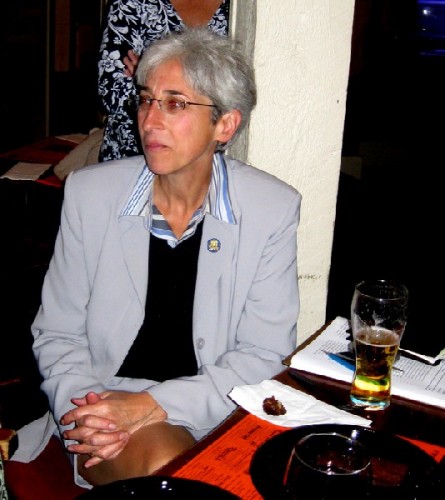 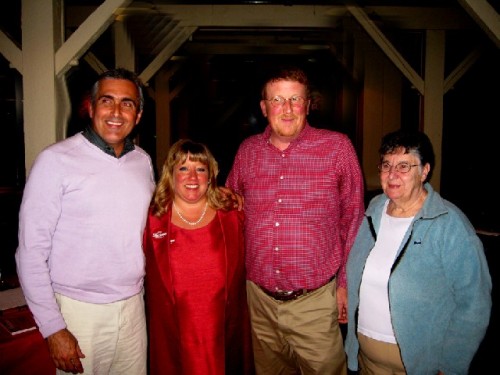 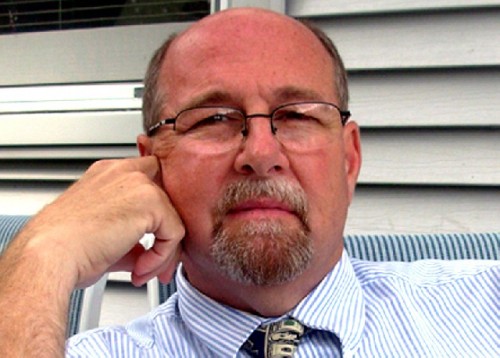 Candidate Dick Alcombright denies that he was given questions prior to the first debate with Barrett.

Last night North Adams City Council incumbent and candidate for reelection, Lisa M. Blackmer, hosted a meet and greet upstairs at the Freight Yard. She was decked out in her campaign color of maroon in a silk dress and matching full length coat. Her husband Bill, a Massachusetts State Police officer, was coordinated in a matching golf shirt festooned with a big Blackmer button.

As we worked the room the rumors were flying. In a hot and ever more divisive campaign the gloves have come off.

For a Tuesday, starting at 6 pm, there was a nice turnkout for the complimentary snacks and cash bar. Michelle Silva, an artist from the Eclipse Mill, who is tying the knot with artist, Vin Jensen, was helping out registering guests to a sign up sheet for volunteers. Other artists attending were Gail and Phil Sellers of River Hill Pottery and Barbara May of the shop Tangiers.

Later in the event Michelle was crisp and lively while introducing the candidate who discussed how she has embraced the community and shares its vision. Blackmer has made it clear that she will work with whomever wins in the hotly contested Mayoral race between incumbent John Barrett and candidate Dick Alcombright.

Significantly, both Alcombright and Barrett attended the event but not at the same time. Alcombright came early to wish her well then departed for another meeting. During the gathering several other City Councilors and candidates attended including incumbents Gailanne  Cariddi, Ronald A. Boucher, Robert R. Moulton, Jr., and Marie Harpin as well as candidate David Bond.

We asked Mayor Barrett to pose for a photo with Blackmer. He did but then asked "Is this for your rag?" It seems that he is not pleased with the coverage of Berkshire Fine Arts. He was given a favorable interview opportunity with Larry Murray. Also Murray is assigned to report on the next debate as we strive for balanced coverage.

"When are you going to stop telling lies" Barrett asked me? Today we contacted his office in an attempt to clarify specific points. These include a rumor that Alcombright was given debate questions in advance.

This accusation has been repeated by multiple sources. During a conversation with long standing City Councilor, and Barrett supporter, Marie Harpin, she alleged that the questions had been provided in advance by Mike Supranowicz  the CEO of the Berkshire Chamber of Commerce. The debate and its somewhat soporific questions had been co organized by the Chamber and the political science faculty and students of the Massachusetts College of Liberal Arts.

Asked for clarification of this rumor and its source Harpin simply stated with a smile "Honey, I know everything that happens in North Adams." We asked if she thought it had been a good race. "It might have been" but she deplored the divisiveness and name calling which she has never seen in prior campaigns. She expressed that Alcombright supporters had acted inappropriately during the debate and had disrupted the Fall Foliage Parade last weekend. "It's ok to stand on the corner with your signs in support of a candidate" she said. "I have done it myself but it is inappropriate to disrupt a family event with rude behavior." Overall, Harpin expressed confidence that Barrett will win. We  followed up today but have not received a return call from Harpin.

We spoke with Council candidate David Bond. He stated that he is a fifth generation citizen of North Adams. His family has owned property on Route 8 since 1859. Recently he built a mini golf course and driving range which he sees as a part of the arts/ leisure/ tourism economy of the city. Asked how it is going the 34-year-old entrepreneur stated with a sideward glance and shrug that the weather had not been great. But it helps to own the property.

Essentially, Bond supports Alcombright as the better long term option for the city. He pointed out that even if he wins Barrett is winding down at the end of a run of 26 years. "We need somebody who is going to be around" he said. "Even the Mohawk development is going to take at least four years." He also feels strongly that the city urgently needs a marketing plan to promote tourism and support small business. There was a critical comment about Barrett's approach of making the city "pretty" with flower plantings and putting up "Christmas lights."

"We need to stop talking about Sprague" he said. "That's over and doesn't mean anything to my generation. We need a state of the art website showing all of the activity going on." This is a project that he sees would involve the creative community.

This is an important issue with a clear demarcation between the Mayoral candidates. Barrett has stated emphatically that it is not the function of the city or Mass MoCA to promote small businesses. There has been a high turnover of business with vacancies in the downtown. Barrett likes to differentiate between the mall with Staples, Peebles, the Gym and North Adams Multiplex vs. the businesses along the other half of the downtown area.

The Barrett mantra is that small businesses like Gramercy Bistro, The Hub (a restaurant) and Jack's Hot Dog Stand have no problem attracting customers. One wonders at citing a hot dog stand, however tasty, as a model for a long range business strategy for North Adams.

During the debate Alcombright expressed concern about the 150,000 visitors "who come and go from Mass MoCA" with little impact on small business, shops and restaurants in the city. He stated that there needs to be a fully developed marketing strategy.

During the debate Alcombright often referred to an indexed briefing book. When taunted about it he commented "I came prepared." This appears to be the source of the rumor that he had been fed questions in advance.

"I did not have questions in advance" Alcombright stated when we called today. He declined to elaborate stating that he is sticking to his game plan and preparing for the debate on October 14.

"We did not give questions to either candidate prior to the debate" Mike Supranowicz, the CEO of the Berkshire Chamber of Commerce, stated. Asked if he had heard the rumors he said that "We have heard a lot of things floating around in a heated campaign with zealous responses on both sides." He declined to elaborate further.

During the first debate it was significant that the candidates did not observe the usual protocol of a hand shake. It underscores the notion that the contest has become personal and contentious. This fuels the perception of a divided and partisan city. No matter the outcome of the race there will be a healing process as we work to move forward. That might start with more visible civility and professionalism from both candidates. Like that pro forma handshake next time.

As of deadline, after several hours, we have not had return phone calls from Mayor Barrett or Council person Harpin.