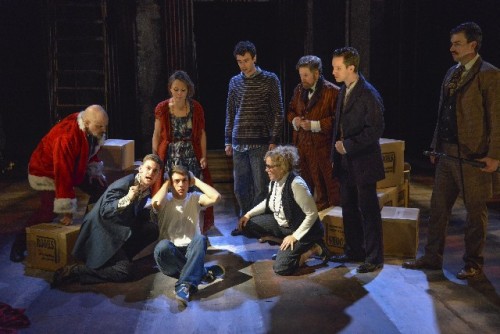 Cast for Assassins at New Rep. All photos by Michael Brilliant 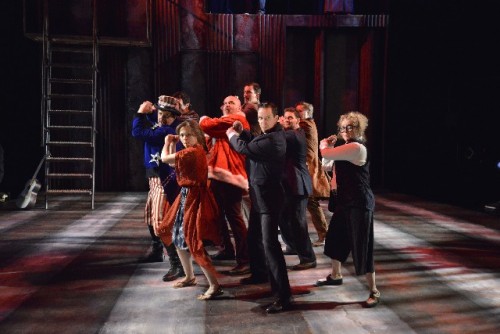 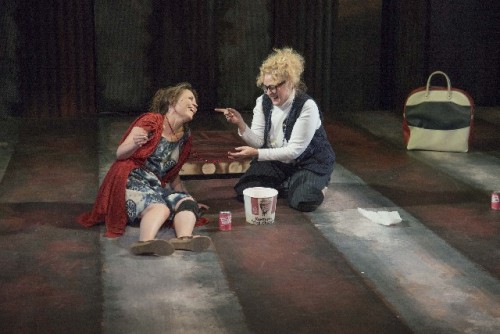 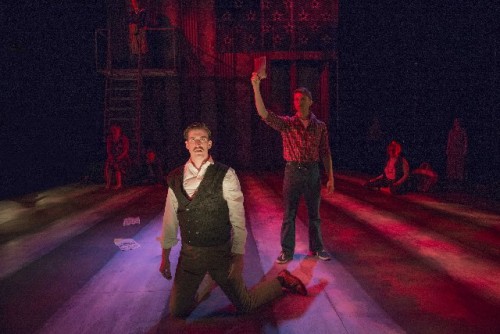 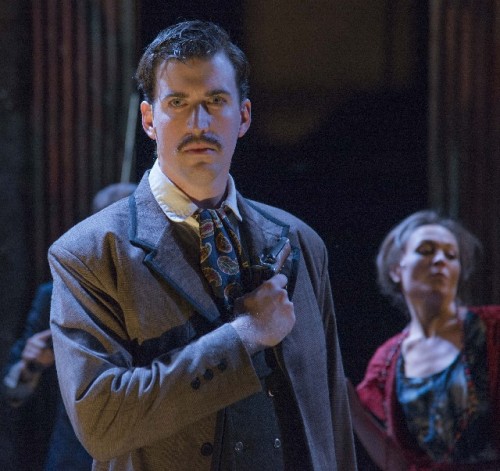 At best, looking at historical assassins is a review of madness or evil. At worst, it is an often repellant exercise investigating psychopathic behavior. The premise of this as musical theatre is rather bewildering. What redeeming features are we to take from looking at loners, losers, social misfits and a variety of miscreants? Can we learn or at least understand the why of these infamous individuals? What is the indefinable motivation that drives them to murdering our highest office holders? What can we be actually taught about these lone gunman and conspiratorial outcasts from Lincoln to Reagan?

The problem here is how do you explain the banality of evil in song, dance and witty phrasing?

But this is what Stephen Sondheim's Assassins does or at least tries to do. Now at the New Repertory Theatre in Watertown, MA, this show has all the makings of a good musical: melodious music, provocative characters and interesting stagecraft. But unless it is considered some sort of revue, there is no real point to the production.

It is not a celebration of historic villans, nor is it a true insight into abnormal behavior. What exactly is it? Irony here is not gallows humor but just not very funny at all. Here, we have a sinister Sondheim, a dark look at the American Dream gone awry over and over again. This is both the fault of the musical tragicomedy itself and a fair amount must be attributed to its direction.

On the positive side of the ledger, there are a number of very good things about the show. The energetic ensemble is talented. There are several fine voices in the show. Notable are Mark Linehan's suffering, self-righteous John Wilkes Booth and Peter S. Adams' angst-ridden Samuel Byck. Also, Brad Peloquin's Charles Guiteau is a real song and dance man high stepping all the way to the gallows. Appearing to be just on the edge of reality, McCaela Donovan's Squeaky Fromme was the most animated character portrayal.

Though clearly talented, Benjamin Evett's Uncle Sam costumed proprietor character is not structured well. Is he the carnival barker of evil doing, the angel of death or just a borderline sociopath who is an enabler/observer?

The brilliantly constructed set by Kamilla Kurmenbekova and JiYoung Han is both visually dramatic and theatrically flexible. Actually, the intriguing treatment of a giant American Flag environment may be the show's best character. Lighting by Jedidiah Roe and Sound Michael Policare imbue the show with vitality. The music is melodic if not inspiring. It is by Sondheim for goodness sake! Adding period rhythms and tunes to the production, the musicians are quite fine.

The confusion of time and historical periods is only partially resolved by the various costumes. Booth and Charles Guiteau are the best adorned. Though a derby would have helped, McKinley assassin Leon Czolgocz (Kevin Patrick Martin) seemed to be of no particular period. His conversation with Emma Goldman (Casey Tucker) didn't help to give much focus either. FDR's attempted shooter Guiseppe Zangara (Harrison Bryan) is just hunched over, dirty and angry-looking not 1930s crazy or radicalized. A period straw hat would have been era relevant and more ironic than his psychosomatic stomach pain.

Unfortunately, Jim Petosa's direction was not finely brushed in but rather slapped on with very thick messy broom strokes. Perhaps with no malice but a little forethought, the various attempts at humor were often presented in a ham-fisted way. Confusion regarding actors playing various characters could have been greatly alleviated by better use of time related props or simple appropriate accoutrements. Often those that were used didn't quite work. The nonplayed guitar by the Balladeer (Evan Gambardella) and the various pistols are examples of this.

The recipe for a good show did not come together here. As the head chef, Petosa made this production more of a thin soup than an interesting stew. Though this could be considered a complicated menu of a show, apparently picking out the proper ingredients was especially difficult for him.

To be quite fair, this is certainly one of Sondheim's lesser works. Dealing with it is quite hard, but Petosa has to be held responsible for selecting it as the first show of the New Rep's 30th Anniversary season. With a high energy talented ensemble and terrific stagecraft, the show had promise. But unfortunately, this is a show that's promise was not kept.