Love and Information by Caryl Churchill 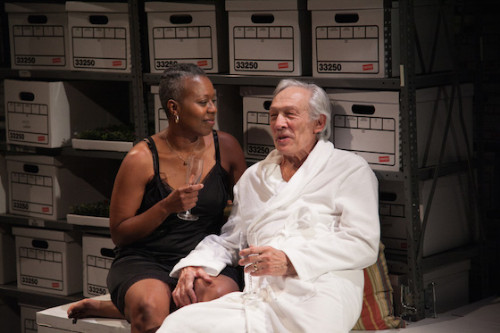 Caryl Churchill said in a 1960 essay, "The role of the playwright is not to give answers but to ask questions." I suspect most of those who attended Remy Bumppo's new production of Churchill's 2012 play, Love and Information, would agree. Lots of questions, few answers.

The production is made up of about 50 seemingly unrelated scenes in random order, some no more than a few seconds, and the longest lasting a few minutes. They are played out by 10 actors, all of whom play many roles, in an anonymous space fitted out with steel shelving units and corrugated file boxes of different sizes. The boxes themselves suggest data--as in all the boxes it takes to store the paperwork for a legal case or a consulting engagement--or the memories of a life. The scenes, skillfully choreographed by director Shawn Douglass, add up to a pastiche of love, memories and the need to make human connections in an era fraught with technology.

The 85-minute play is at times funny, sad, poignant or puzzling. The actors make use of current technology in many scenes. In "Wedding Video," for instance, three couples comment on the video while watching the event on a smartphone, a tablet or a television set.

The cast includes veteran actors such as David Darlow (he of the rich voice) and Mary Poole (with perfect diction) and newer talents such as Emjoy Gavino and Frank Sawa. Penelope Walker and Raymond Fox give strong performances in several scenes, as do Andrés Enriquez, Gregory Fenner, Linda Gillum and Jennifer Glasse.

Fox and Gavino practice memory tests in "Memory House" while Darlow and Walker are touching as one-time lovers remembering the old days in "Ex." In another scene, "Linguist," a multilingual waiter flummoxes his patron with dozens of words for "table." In "Virtual," a man expresses his love for his virtual girlfriend to a friend. "She's just information ... she hasn't got a body she has a fantastic ... I've never felt like this before."

Jacqueline and Rick Penrod's minimalist design works beautifully. Boxes are opened to retrieve props and costumes, pulled out for seating or festooned with pillows and coverlet to create a bedroom scene. Occasionally a table and chairs are added to the set. Sarah Hughey's flexible lighting highlights a current scene, while actors may be in place for another to follow quickly.

Churchill's script comprises seven sections; her intro asks that they be performed in the order written but that individual scenes within each section can be performed in any order. Randomizing or unrandomizing the scenes would make no difference. Love and Information expresses our ADHD culture and our paranoia about security and privacy while illuminating our need for those human connections.

From a scene titled "Facts:"

--Do you love me?
--What color is the caterpillar of the brownhaired bat moth?
--Pale orange with black stripes.
--Dont do that.
--What is the formula that disproves Godel's theorem?
--X bracket a over t minus pi sigma close bracket to the power of ten minus n to the power of minus one squared
--What is a plok?
--A stringed instrument played by the Larts of the Gobi Desert
--By what name do we usually refer to Oceanus Australensis Picardia?
--I do yes I do. Sea anemone.

Caryl Churchill, now 77, has written 50-some plays and rarely repeats herself in content or form. She's been called the David Bowie of contemporary theater because of her constant reinvention of her work. Some of her plays that have been performed recently in Chicago are: Serious Money (1989, Court Theatre, the first Churchill play I saw), Top Girls (2015, the Den Theatre) and Cloud Nine (2011, Gift Theatre).

Love and Information continues through November 1 at Remy Bumppo Theatre, at the Greenhouse Theater Center, 2257 N. Lincoln Ave. Performances are Thursday through Sunday at varying times with one Wednesday performance on Oct. 7. You can buy tickets for $42.50 to $52.50 online or by calling 773-404-7336.