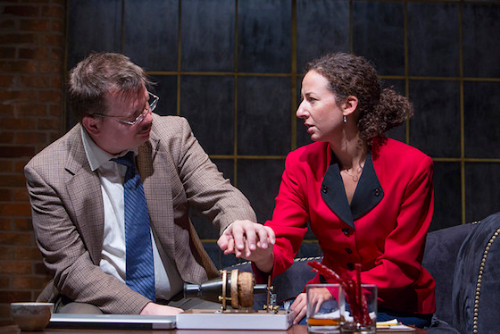 Foust and Valada-Viars in Watson Intelligence. Photo by Charles Osgood.

Four Watsons, multiple Merricks and Elizas. Technology disruptions swirl through several eras in the new Theater Wit production of the awkwardly named The (curious case of the) Watson Intelligence by Madeleine George.

The play is 140 minutes (one intermission) of fast-moving, time-switching scenes with quick costume and set changes. One of the Watsons is Mr. Watson, who occasionally is paged by Alexander Graham Bell, "Come here, Watson. I want to see you." (A misquote, according to Watson himself appearing on a 1930s radio program at Bell Labs.)

The plot cannot be summed up briefly. In the present era, Eliza, a tech whiz (Kristina Valada-Viars), left IBM to start her own firm, Digital Fist, to use technology to make life better for the poor and the sick. ("Democracy is slow, technology is fast," she explains.) She has just left her husband, Merrick, a businessman who's running for county auditor. Joe Dempsey plays this character smartly, as well as all the other Merricks.

Director Jeremy Wechsler's choreography enables the three actors who play multiple versions of their characters over time to move smoothly from one persona to another. But special kudos go to Joe Foust, who is so sweetly, smugly, smartly, and sometimes goofily all four versions of Watson. (His performance and dialogue as the computer Watson resetting itself is very tech-witty.) Two of them are alive: Bell's Mr. Watson and Sherlock Holmes' compatriot Dr. Watson. And two may or may not be. One Watson is a version of the IBM computer Watson; another is Joshua Watson, a member of the Dweeb Squad, who fixes computers and steals Eliza's heart. And may be a clone of another Watson. (Sorry for possible spoiler.)

Eliza realizes that Watson (Joshua) is not a good love match and describes her bewilderment at why she's obsessed and possibly in love with him.

To begin with, he only owns one pair of pants. One. He goes to the laundromat in his boxer shorts.... And that's just the tip of the iceberg. His favorite restaurant is Applebee's. He's a huge, huge Billy Joel fan. He went to Medieval Times for his birthday and described it without irony as one of the greatest nights of his life, and yet I can't get enough of him, I can't get enough of him.

(Of course, to me, your theater critic and rock music fan, the inexcusable part is that he's a Billy Joel fan. But Medieval Times and Applebee's are close in schlock terms.)

Two scenes involve clever costuming. The contemporary Merrick grooms himself for a campaign event and mid-scene becomes the 19th century engineer Merrick, preparing to speak about his invention at a prominent London club. He rips off the tie he has just put on, adjusts his collar, puts on a vest, adds an ascot tie and tail coat and is a 19th century man. In another scene, Watson, the computer repair guy, dons a giant yellow foam pocket protector and wildly oversize glasses as his Dweeb Squad uniform.

I personally have been smitten by the writing of English playwright Tom Stoppard for many years and I suspect that Madeleine George is too. Stoppard's plays Jumpers, Arcadia and Travesties--and certainly Coast of Utopia (unfortunately not yet produced in Chicago) all have this time-tripping, idea-smashing approach. George's work isn't quite as slick as Stoppard's but the Watson Intelligence is a good start.

The Eliza-Watson pairing could interestingly be compared to Spike Jonze's 2013 film, Her, or even better, to Richard Powers' 1995 novel, Galatea 2.2, in which an English professor as part of a tech team teaches a neural network to learn, talk and love life. (Powers is an Illinois native, by the way, and holds a chair in English at the University of Illinois Urbana-Champaign. His novels all explore the intersection of science and technology with life and human relationships.

George's play Seven Homeless Mammoths Wander New England ran successfully in a fine production at Theater Wit last year. It too touched on the confluence of science, ideas and human relationships. But The Watson Intelligence is ever so much more technologically complex and absurd. It's sure to be an invigorating and entertaining evening for all but the Luddites.

The (curious case of the) Watson Intelligence continues through November 14 at Theater Wit, 1229 W. Belmont, with performances Thursday-Saturday at 8pm and Sunday at 7pm. Tickets for $12-36 can be purchased online or by calling 773-975-8150.