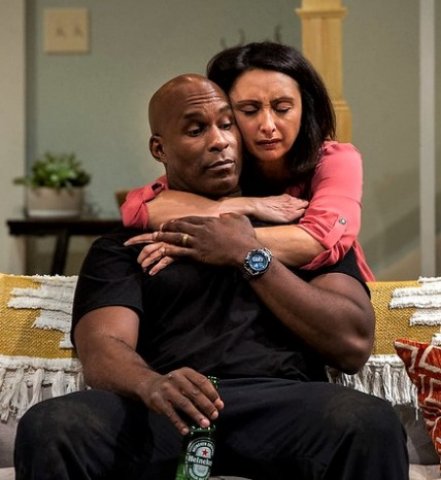 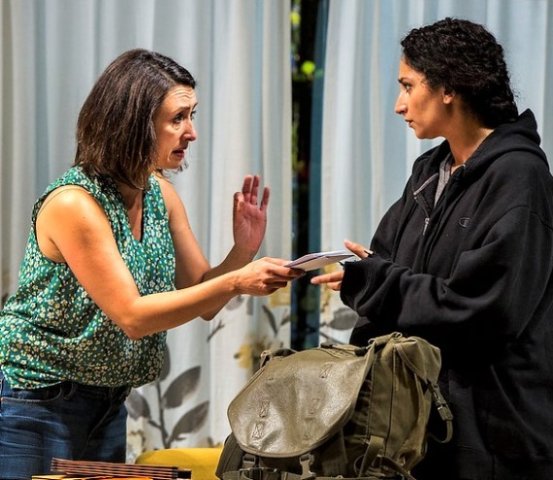 Natascia Diaz as Anna and Rasha Zamamiri as Sherri. 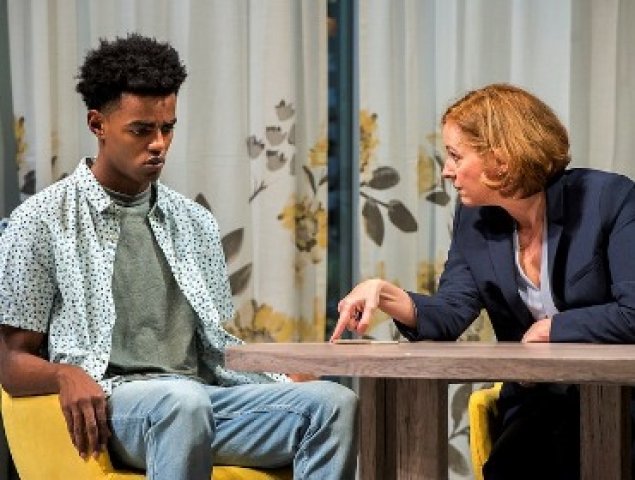 As the final production of the 25th season, artistic director, Julianne Boyd, is directing the world premiere of a timely social justice play American Underground by Brent Askari.

Home from college the fast paced, gripping drama is bookended with monologues by Jeff (Justin Withers). He reflects on what happened on a fateful day then closes with a recap of what has ensued. He leaves us with disturbing questions for the audience. A subplot has been Jeff’s coming of age forged on an anvil of justifiable homicide.

He is the son of an African Americn father, (Rog) Alan H. Green, who teaches biology at a Florida based university. His Hispanic mother, (Anna) Natasha Diaz, was an aspiring novelist. She has compromised that ambition to work as a librarian. Her literary skills are used to write radical pamphlets for an American Underground group The Network.

It takes time to reveal that in a plot which evolves from simmer to boil. The initial impression is one of normalcy. The set designed by Mariana Sanchez is disarmingly benign, generic, and middle class. Early on, sound by Fabian Obispo blares street noise of sirens implying danger and potential mayhem. Lighting by Matthew Richards isolates the staging as individual actors step forward for monologues.

That trope creates the sense of intentionality more didactic than drawing conclusions from a conventional performance. The monologues separate from the script as an ersatz lesson plan. That’s hardly a coincidence as the production is slotted into the fall program coordinated with the academic curriculum. With some 2000 seats for high school and college students Barrington focuses on targeted message plays.

Generally, this has meant new emphasis on classics or writing based on recent events on the social and political spectrum. The approach presents theatre as a vehicle for discussion and debate. Too often, however, this means preaching to the choir. People who attend theatre tend to be older and liberal. The heart and soul of this effort targets a young audience with not yet fixed or atrophied opinions.

This has never been more important than in the current state of social and political division. President Trump, the elephant in the room of this drama, speaks openly of potential civil war and shooting aliens.

The drama of Askari extrapolates Trumps xenophobic paranoia that every Muslim is a potential terrorist. That casts a blind eye on the history of the American Genocide, slavery, the Know Nothing Party, reconstruction, Japanese internment camps, the My Lai Massacre, and other atrocities.

Sitting in front of the TV with a beer Rog is excited that the Miami Dolphins has won a game in the final seconds. There is talk of a special dinner of grilled salmon. Jeff is late getting home from the mall past curfew. It emerges that he has witnessed something horrendous. That led to a fight with his mates and intemperate utterances against the government. Anxiously the parents ask if there were cops? No, but there are cameras.

Concerns for the safety of Jeff evolve into familial tensions. There are secrets on both sides. The arrival of Sherri (Rasha Zamamiri) forces everything into the open. An act of terrorism, bombing during an NBA final, has resulted in all American Muslims herded into internment camps. There is a bill pending to slaughter them.

In a soliloquy that evokes Shylock’s in Merchant of Venice she states that she is a born and bred American. For generations her people have been prominent in all aspects of society. Anna, for her part, notes that the Koran is among the banned books in her library. That parallels censored media and fake news. With Trumpian entropy America is drowning in a sea of lies. Jeff had pointed to a not distant future while the direction of Boyd has a focus on here and now. With even loyalist Fox turning on him Trump now openly speaks of starting a truly American news network. We have been waiting for that to happen with Trump as the new Roger Ailes.

Is there no end to this shit Askari’s play asks?

The Trumpian mouthpiece is the numbingly ordinary housewife Kourtney. As a kind of extremist neighborhood watch she shows up as “security.” Initially, her tone is as benign as a Tupperware salesperson. Tension ratchets up in increments.

The family has been under surveillance for its  participation in a book club. Security has been assigned to the homes of four families. The first to confess will be granted partial immunity. After intensive reeducation in fundamentalist American values the “winners” may be permitted to return home.

Deconstructing the Holocaust historian Hannah Arendt discussed “The banality of evil.” The Final Solution was executed by former shop keepers, school teachers, workers and peasants. Given a uniform and gun they became executioners capable of every atrocity.

We feel the hate in Kourtney. Her niece was among those blown to bits at the NBA final. That is her source of righteous revenge on all Muslims. They brought it on themselves she proclaims. But Jeff has doubts about the event itself and bias of the reporting. He has seen footage that contradicts fake news.

That revelation for Kourtney is proof of Jeff's subversive activity. Owning than information and confronting her is when a boy became a man. Hopefully, it is a moment that will connect with a young audience.

Cato ended each speech with "Carthago delenda est." The current rhetoric holds that Trump must be destroyed. Then it was the Republic at stake, now it is the constitution, rule of law, and democracy.

If Askari represents fantasy and fiction indeed how close is it to plausible reality? Is this just ultra liberal, socialist, paranoia? Writing this review may target me for an enemies’ list if indeed I am not there already. As Americans we are entitled to dissent.

As a lover of history Rog revealed that an ancestor escaped slavery through the Underground Railroad. That’s why he has joined The Network as an Eliminator.

For many undocumented, Muslims, Hispanics, and those who have overstayed visas American Underground is not set in the hypothetical future. It is here and now.

My Sicilian grandfather was an undocumented alien. Hiding in plain sight in Brooklyn he raised a family of eight, none of whom, were criminals. In that sense American Underground is a part of my heritage.