Feel The Heel of Puglia 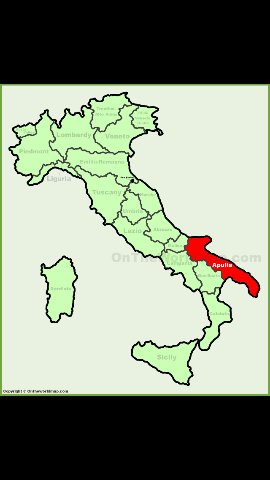 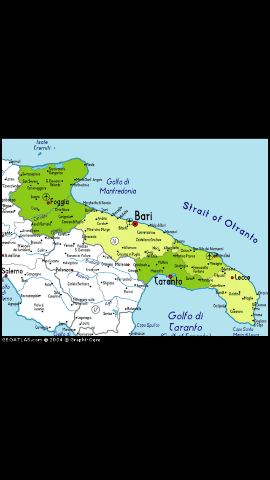 When you speak about the boot of Italy, many people are unaware that the reference is to Puglia.

Some of my favorite red wines come from Puglia.

Puglia is a long, narrow peninsula bordered by two seas, the Ionian and the Adriatic. It is the least mountainous region in Italy. The few mountains that exist are from the southern Apwnnine chain. The second group of mountains that run through Puglia have high, steep cliffs and are known as the Gargano Hills.

Half of the territory is flat, like a pancake. The flat plains are called Tavoliere delle Puglia, while other, smaller plains exist throughout the territory, one is the Terrra di Bari and the other is known as Pianura Salentino.

It is a land where ancient settlers left innumerable monuments. The land is rich in culinary traditions, thanks to the millions of olive trees, wine and the bounty of the sea. (I was told that there are more olive trees in Puglia then people)

The region is divided into six provinces: Bari, Brindisi, Foggia, Lecce, Taranto and Barletta-Andria-Tranim the newest, established in 2004.

The two seas that border Puglia are a gift for the vineyards. The seas influence, paired with the hot summers, help make the wines acidic, which is perfect for food pairing. With over 325 miles of coastline and vineyards near the coast, it is no surprise how large an effect the coastline  has on the vineyards.

The three main indigenous grapes that make Puglia unique are: Primitivo di Manduria (the grape I will focus on this coming week), Negroamaro and Nero di Troia. Primitivo, from central Puglia, means ‘the first’ because the grape is the first to mature. Characteristics of the Primitivo grape differ from most other varietals because of its size. The berries are small clusters with skins that have medium thickness. Early maturation (late August) helps create a very juicy pulp which comes from the naturally high concentration of sugars in the grapes.

The resulting wines are often opulent with obvious cherry overtones.

Primitivo has the same DNA as Zinfandel, so, don’t be afraid to try it. You already know it by a different name.

The red grapes of Puglia make way for some interesting white varietals, of which, these my favorites: Verdeca, Bombino Bianco, Fiano, Bianco D'Alessano and Moscato Reale.

Northern Puglia wines, with its undulating weather conditions, differs from the bitter hot weather conditions in the south. The main red grape from this area is Nero di Troia, a black, thick skin, late maturing grape, whose flavor resembles a peppery blackberry.

The third most important red grape is Negroamaro, which grows with passion in southern Puglia, home of Brindisi and Lecce. The word, Negroamaro, comes from the Latin and Greek words meaning 'black.’ Historically speaking, Negroamaro, is the oldest cultivated grape variety in Puglia. The grape has been around for the past three thousand years. The grape is small and compact, creating simple clusters. Thick skin grapes that are compact, like Negroamaro, create wonderful wines that age well. Hints of thyme and licorice define this overly acidic varietal.