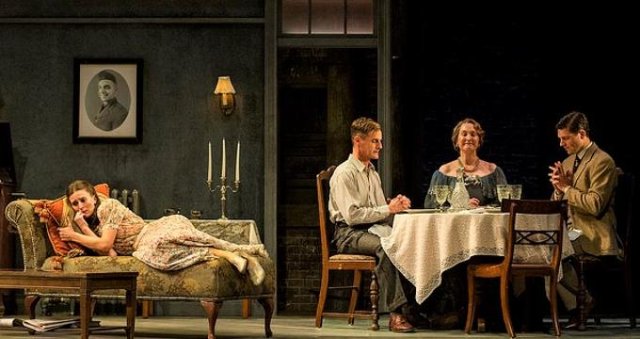 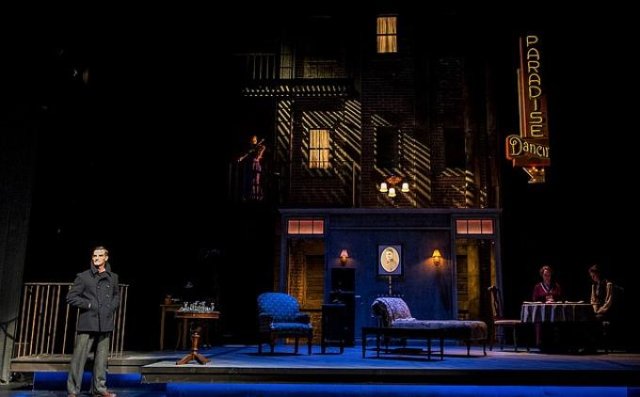 Lighting by Matthew Richards illuminates Tom and the Violist on a balcony.

Straight no chaser Barrington Stage Company has produced a compelling, hardball production of the Tennessee Williams (1911-1983) masterpiece “The Glass Managerie.”

He was 33-years-of age when it became his first Broadway hit, and enduring classic of American drama, in 1944. The memory play was inspired by lifelong torment over the mental illness, confinement and lobotomy of his sister. When he became successful he cared for her including through his estate. Upon her death it represented some $7 million.

Rose Isabel Williams was born in Gulfport, Mississippi, in 1909, the first child of Edwina and Cornelius Williams. Her brother Thomas - Tennessee - was born three years later. She died in an asylum at 86.

As Laura Wingfield (Angela Janas) she is conveyed as physically as well as mentally impaired. Shy and withdrawn she failed at attempts to be skilled and self reliant. Rose was unable to hold secretarial positions.

There is a photo of Mr. Wingfield prominently displayed. A zinger is that he specialized in “Long Distance” as an employee of the telephone company. Afflicted with anger, resentment and guilt the play is framed by Tom’s plan to escape as a merchant marine. In the best of circumstances the “gentleman caller,” Jim O’Connor (Tyler Lansing Weaks), he brings home from work will marry his sister and provide for the family.

The power and poetry of the play is a measure of the extent to which Williams laid bare the agony of his family and personal life in the guise of art. When he left Saint Louis to take a job in the script factory of MGM there was overwhelming guilt of having abandoned his afflicted sister. Aspects of Rose would resurface as vulnerable, fragile women in "Glass Menagerie" "Streetcar Named Desire" "Suddenly Last Summer" and other works.

While private life is an irresistible source for writers to draw upon it comes with collateral damage. It informed the finest work of Williams, as well as Eugene O’Neill, but came at a terrible price. Opting to reveal and betray family they paid with their souls. When Williams died there was nothing left of him. Who owns the rights to our lives?

It is with morbidity, guilty pleasure, and remorse for the suffering of the playwright that we come to a production of "Glass Menagerie."

We feel the pain of the narrator weighing the balance of escape from the thrall of his mother and obligation to a crushed and dependant sister. Like Tom the playwright did get away. He enjoyed wealth, celebrity and decadence but never escaped its penalties. Like many who have been abused, the mature Williams was abusive to others and to none more than himself.

Knowing that makes this play utter anguish to endure.

In taking a formalist, traditional, technical approach to the project the director, Julianne Boyd, has created a firewall from consequence of those raw emotions.

In this efficient production Boyd has full advantage of  superb resources.

There is a well crafted, minutely detailed set by Brian Prather. It has all the right elements to evoke the squalor of its St. Louis apartment. The fire escape is essential both for entrances as well as refuge for getting away from the clutches of Amanda. That’s a place for cigarettes and reflections. There is a canyon-like back wall for other fire escapes and apartments. Framing the space is the marquee of a night club from which wafts ambient music.

From an upper fire escape we hear interludes of music composed by Alexander Sovronsky performed in vignettes by violist Susan French. This neatly provides mood and continuity to scenes.

The lighting design of Matthew Richards is particularly crucial and triumphant for this production. With precision it locates Tom as he moves about the set particularly when outside the apartment. A plot point entails when lights go off during Amanda’s grand dinner party for the gentleman caller. Tom stiffed the electricity bill to purchase his seaman’s papers. There is a switch to candle light which Richards conveys evocatively. That delivers a key plot point when, at the end of the play, Laura extinguishes them along with all hope and dreams.

Boyd has also assembled a terrific cast. In this play Dold delivers the deepest and most heart-wrenching of memorable performances we have seen at Barrington Stage. He has summoned all of his craft for this iconic role. Williams never wrote more powerful or poetic lines.

The performances by Janas and O’Connell took me by surprise. The physical handicap of Laura was less pronounced than her mental vulnerability. Other productions tend to play her far more gimpy. The role of Amanda was also somewhat more understated. It’s a part with broad strokes than can devolve into camp. In this version she was more credible and less hateful. She was more to be pitied than censured.

In directing these roles with some restraint we had to invest more in the characters. It is usual for the audience to be pummeled by them. That also tended to shift the focus of the play from Tom as narrator to its emotional matrix. For me, this Menagerie was all about Tom/ Tennessee.

With this somewhat restrained approach and delicate balance the wild card is Weaks as Jim the gentleman caller. I’m not convinced by this casting. He is handsome and somewhat charming but not disarming. It’s hard to read him beyond a nice guy. I never really believed him as Jim.

In the Williams scheme this is a play about delusions and failure. It is all loss and no gain. Nobody gets out alive.

Tom and Jim are different aspects of failure. Tom has always been a looser. He’s a dropout with a nowhere job. The only escape is at the movies.

In real life Williams was put to work in the shoe factory his father managed. That might have been his life had he not run off to Hollywood.

Jim, however, was a star in high school as athlete, debater, singer, actor and heart throb. Since then he has been on a downslide. His factory job is only slightly better than Tom’s. But he has ambition and hopes for a breakout in the emerging field of television. How prescient this was the 1940s.

A decade later Williams returned to the theme of a failed star athlete with Brick in "Cat on a Hot Tin Roof."

Confined to home Laura has a full time job tending to her glass menagerie. On a windeup victrola she plays swing music. The favorite among her glass collection is a unicorn. It is a metaphor of fantasy and her inner world. It is the horn, broken when knocked over while dancing with Jim, that makes it different from a horse. But now missing perhaps the "horse" will get along with other horses.

There is the possibility that Laura, like the dehorned unicorn, will be able to socialize. That is poignantly annihilated when she gives the broken figure to Jim as a souvenir.

The power and wonder of the performance by Janas is that she makes plausible a romance with Jim. Their brief interaction is not just a pity date. She makes us believe that she is pretty as Jim tells her with a tender, sisterly kiss. Back in high school he may indeed have liked her as Blue Rose. Janas allows us to see her not as a “cripple” but as a vulnerable young woman with repressed libido.

The real life Rose had fits laced with obscenities. Tennessee despised her failed attempts at promiscuity. "I hate the sight of your ugly old face!" He screamed at her. In his diary, he wrote: ". . . The house is wretched. Rose is on one of her neurotic sprees - fancies herself an invalid - talks in a silly dying-off way - trails around the house in negligees. Disgusting." Williams later added a note: "God forgive me for this!"

That conflict was invested in the promiscuity of Blanche DuBois and other characters. Williams does not confine this to women. Consider the theme of cannibalism in "Suddenly Last Summer." Abuse and extreme sado macochism were themes in his work.

The myth of Southern Women does not fare well in the work of Williams. We cringe in horror as Amanda prepares a grand meal for the gentleman caller. Dressed in a hideous ball gown (designed by Elivia Bovenzi) the evening is intended to be a triumph for her exposing the suitor to her charm and hospitality. O’Connell is less grotesque than usual.

Knowing how much Williams was damaged by his mother we are assaulted by this scene. Amanda says “"All of my gentlemen callers were sons of planters and so of course I assumed that I would be married to one and raise my family on a large piece of land with plenty of servants. But man proposes-and woman accepts the proposal! To vary that old, old saying a bit-I married no planter! I married a man who worked for the telephone company!"

The fate of Williams was inextricably influenced by female ante-bellum fantasies. His life and art was defined by what might have been. It was to be his literary crucifixion and resurrection.

Creating art wasn’t an option. It was a means of survival. Raw meat is the food of art the hunger for which transforms great artists into cannibals. In "Suddenly" the preditor is devoured by a throng of his victims.

Significantly, Tom seeks refuge at the movies. With powerful insight he reflects on this. In the first scene Tom/Tennessee states his mandate and then deconstructs it.

"Yes, I have tricks in my pocket, I have things up my sleeve. But I am the opposite of a stage magician. He gives you illusion that has the appearance of truth. I give you truth in the pleasant disguise of illusion.”

The line is drawn between art and artifice.

Then he trashes his exit strategy. "People go to the movies instead of moving! Hollywood characters are supposed to have all the adventures for everybody in America, while everybody in America sits in a dark room and watches them have them! Yes, until there's a war. That's when adventure becomes available to the masses."

Just as his father abandoned the family for “long distance” Tom plans to escape. His mother and sister are left without resources. In a similar manner Williams abandoned the sister he adored and felt responsible for her lobotomy.

As Tom runs off to sea there is more truth than illusion in his parting words. They linger with me long after leaving the theatre. It is the essence of the triumph and tragedy of Tennessee Williams. Dold delivered them with devastating impact.

"I left Saint Louis. I descended the steps of this fire escape for a last time and followed, from then on, in my father's footsteps, attempting to find in motion what was lost in space. . . . I would have stopped, but I was pursued by something. . . . I pass the lighted window of a shop where perfume is sold. The window is filled with pieces of colored glass, tiny transparent bottles in delicate colors, like bits of a shattered rainbow. Then all at once my sister touches my shoulder. I turn around and look into her eyes. Oh, Laura, Laura, I tried to leave you behind me, but I am more faithful than I intended to be! I reach for a cigarette, I cross the street, I run into the movies or a bar, I buy a drink, I speak to the nearest stranger - anything that can blow your candles out! - for nowadays the world is lit by lightning! Blow out your candles Laura - and so goodbye."