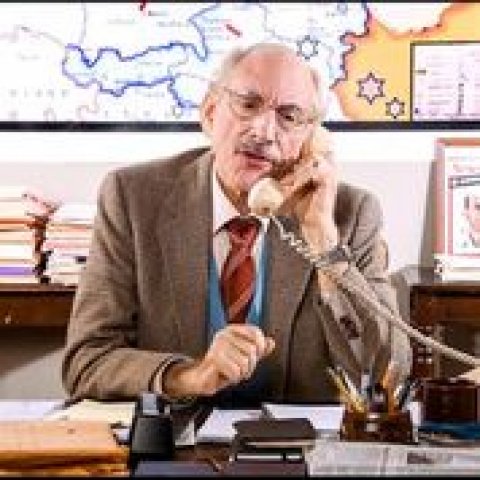 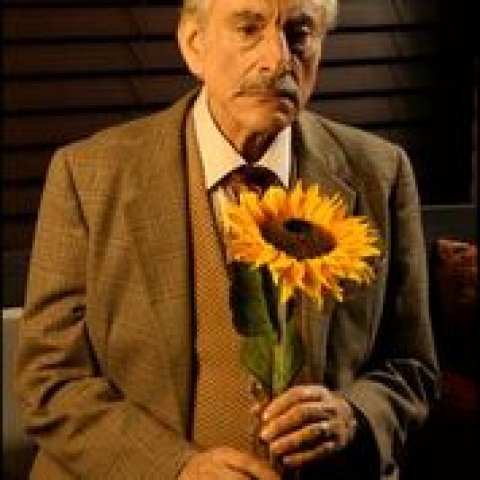 An admirable quality of one-person plays is their ability to establish an especially intimate connection between audience and character. Such a bond can feel so tight that we sense we’re experiencing action in real time.

Certainly, the absence of a “Fourth Wall” in such plays makes us feel that we’re not just watching, but interacting with a real person. In essence, the performer onstage ceases to be an actor. Further, we cease to be an audience. Rather, we are participants in the action, even traversing time periods to enter into the character’s world.

Of course, it helps when a skilled writer of one-character plays frames the work in such a way that the character/audience dynamic works to great effect.

A case in point is Tom Dugan’s Wiesenthal. It is an absorbing, tight, sharply-focused play. The work  highlights a specific time during the renowned Nazi hunter’s life.

Coral Gables-based GableStage is presenting the Southeastern Premiere production. This is a compelling, riveting, touching and funny mounting of the 90-minute play (no intermission). The production runs through Oct. 20 in GableStage’s intimate theater. Its size further immerses us in Wiesenthal’s world. In fact, the play would likely not possess the same power in a large auditorium.

The production stars well-known, award-winning South Florida actor David Kwiat. Here, he is unrecognizable in the role of Simon Wiesenthal, the man some have dubbed the “Jewish James Bond.”

With glasses, a bald forehead and grey hair on the sides and back, Kwiat disappears into the role.  He lends Wiesenthal a blend of humor, winking wisdom and charm, nuance and conviction that’s hard to teach. Moreover, the actor masterfully uses pauses in the script. He also deftly alters his tone of voice. As a result, a point of emphasis, an emotional moment, a dryly humorous remark or a sarcastic comment comes across with greater force.

Meanwhile, Dugan, dubbed “one of the brightest new playwrights of one-man theatre in America,” backs up this accolade. He hasn’t written a “tell-all,” chronological, clumsy bio-play. Instead, the writer exercises impressive focus while demonstrating creativity.

Dugan has set Wiesenthal in April 2003.  The title character is about to “retire” from his Nazi hunting days. But before he goes home, where his wife and others are about to throw him a party, he’s performing one last task. Specifically, he is enlightening his last group of visitors to his headquarters –The Vienna Jewish Documentation Center in Austria.

Those visitors happen to be the audience. Through the playwright’s framing device, we’re visitors from America. We have arrived at the center to learn about Wiesenthal’s work.

Dugan jumps back and forth between the present and the past. Wiesenthal reflects, instructs, reminisces and warns against apathy and complacency. If we forget atrocities that happened, they surely can re-occur.

Indeed, these are especially chilling reminders during our time, when an increase in hatred and violence are leaving many fearful.

In flashbacks, Wiesenthal also works to hunt down former Nazis. By setting the play toward the end of the title character’s career, Dugan creates an aura of urgency. Even though the events of Wiesenthal’s past had already occurred, we feel as though he must bring notorious Nazis to justice before he retires.

Kwiat, through wide eyes and a conviction-filled voice, invests Wiesenthal with intensity and a strong sense of commitment. No doubt, this humanitarian is out to improve the world. Specifically, he will do his part to put the bad guys away.

Yet, even as Dugan (and Kwiat) make us admire Wiesenthal for his perseverance and dogged determination, neither artist portrays the character as a saint. Instead, he is an imperfect human being, like any of us. For instance, he can, as we learn, resort to methods that are “not exactly kosher.” Some might become offended when Wiesenthal asks us to put ourselves in some German people’s situation to understand their admiration of Hitler. But, as audiences will learn, there’s a good reason why Wiesenthal doesn’t simply and automatically denounce all SS men and Germans while adulating all Jews.

As Kwiat embodies this historical figure, it’s impossible not to admire this charismatic man.

Sometimes, he smiles mischievously, or winks his eye as he imparts a kernel of wisdom. At other moments, he’s deep in thought. You sense you know this man. Perhaps he’s similar to your charming, aging uncle or kindly grandfather. Picture some of the great actors who’ve played Tevye. By doing so, you’ll get a mental image of Kwiat’s portrayal of Wiesenthal.

The actor, somewhat hunched, grins ear-to-ear. He imparts verve and a zest for life. In addition to displaying a deft sense of comic timing, Kwiat vividly conveys varied feelings and emotions. They include anguish, disgust and outrage.

Wiesenthal warns and instructs without preaching and lecturing. In addition, he mixes universal messages with heartfelt, personal anecdotes filled with pathos. Have a hanky handy.

Under Gail Garrisan’s direction, the pacing is fluid. Meanwhile, the pathos and humor receive equal emphasis. She often moves Kwiat about the stage to keep him from being a “talking head.”

Speaking of the stage and setting, Lyle Baskin has designed a wide, spacious and organized set. It includes shelves of neatly-stacked books. Also, folders lie piled atop each other. All of this suggests that a highly-organized person runs this place.

Wiesenthal is the true story of a humanitarian who was Jewish. And while there are some words that mostly Jews will appreciate, you hardly have to be one to extract value from this cautionary, yet humorous and heartfelt one-character show.

GableStage’s production of Wiesenthal continues through Oct. 20 at its theater, 1200 Anastasia Ave. in Coral Gables, near Miami. For showtimes and tickets, visit www.gablestage.org or call (305) 445-1119.