Benjamin Thys and James Jorsling as Perkins and Babu.

A quartet from Benito Cereno. 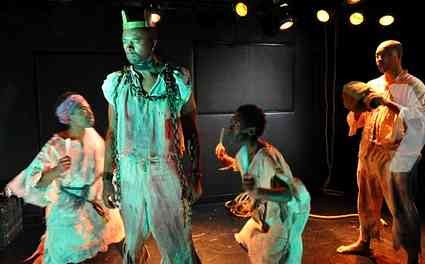 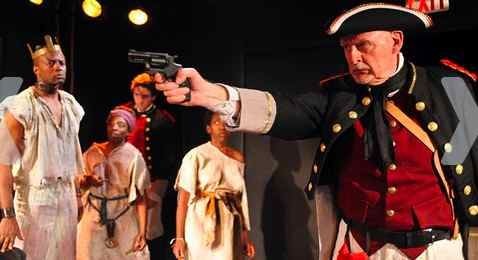 Arthur Bartow as Delano finally gets hold of himself in inimitably American style.

Robert Lowell’s Benito Cereno is on stage at the Flea Theater on White Street in New York. Woodie King, Jr. directs.  Lowell’s dramatization of the Herman Melville story is focused on Captain Delano (Arthur Bartow), a Yankee who is at once obtuse and brave.  In this difficult role to negotiate, Bartow succeeds in treading a fine and difficult line between ‘massa’ of his ship and protector of the American flag and his boat’s crew.  Bartow plays Delano with an appropriately witless authority.

Lowell looked at the relationship between master and slave and articulated aspects of the dynamic that may still be unmentionable.  The loyalty a master could elicit was well known; the bond created, a treasure.  “If we’re so proud of our white blood surely a little added to the blacks improves their breed.”  Phrases like this still screech.

Delano and his bosun Perkins row over to the San Domingo that they have spotted drifting on the horizon like a ghost ship.  Don Benito Cereno (Rafael de Mussa) and his personal slave (James Jorsling) explain the chaotic condition of their boat:  three of the crew climbed a mainyard and fell to their death along with the rigging.  Scurvy and then yellow fever hit most of the Spanish crew.  Painfully slowly it dawns on Delano that the slaves were not affected.

In Melville, a ship is not the real world, but a universe cut off from other universes, and yet representing them in its intense isolation. Dreams are meeting head on.  The four principal actors in King’s production are not natural, but rather move and speak as formal characters couched in words and tones.

Delano continually pulls himself to attention to control himself and the moment, even though we sense everything around him is out of control.  His bosun knows his place in a ship’s hierarchy, so he does not share his impression that this ship’s order has gone dangerously awry.  Thys captures the boson’s trap, tentatively moving between observation and deference.  The rich beauty of Lowell’s language is often heard as the actors deliver monologues, duets and quartets.  The particular humor of this contemporary take may arise because fifty years have passed and Delano’s remarks now seem silly, although they continue to reveal.

Don Benito Cereno, his coat in shreds and his face bruised, elicits sympathy from Delano, who is prompted to help him resume his role of captain with kindly gifts of water, cider and fish, but provisions can’t help Cereno.

Jaymes Jorsling is bewitching as Babu, often breaking the formal stature of Cereno, Delano and Perkins, and creating the confusion he needs to pull off his plan.  Confusion is also the shadow primitives cast over the supposedly civilized world.  As Delano says, “What noiseless, gliding briskness” as Babu goes from s clipped good cheer to threat.

Finally Delano understands when Perkins reports, “I‘ve used my eyes,” and “There are things that need explaining here, Sir.”

Entertainments on deck are accompanied by ominous clicking of knife blades and an odd African cries.  King succeeds in holding the mystery and building both threat and trance. The poisonous atmosphere is inflated throughout the performance, and finally explodes.

Is the essence of New World character a foolishness and fearlessness that somehow work, the play asks?  “A man can do what he can,” says Delano, as he at last draws his pistol to handle problems.  An African American woman creeps across the stage in the finale and lets out a scream which lingers on today.