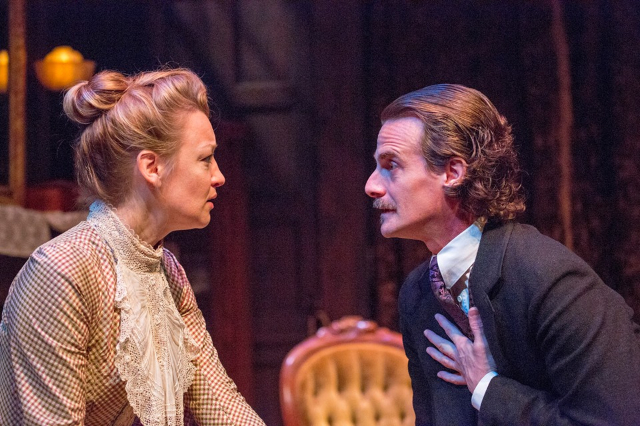 For its fall productions Barrington Stage presents works with a social and or political focus. The intent is to create related community programming including support for local school attendance.

The vintage, 1938 play by Patrick Hamilton, Gaslight (also known as  Angel Street), is more oblique than prior projects. As a psychological thriller, verging on melodrama, the educational program will explore states of mental health and treatment.

Initially, there were long runs on stage in London and New York. The play was rewritten for films in 1940 and 1944. The latter is a classic starring Ingrid Bergman, Charles Boyer and Joseph Cotton. It was directed by George Cukor. The film earned seven Oscar nominations with a win for Bergman. There was a nomination for Angela Lansbury in the supporting role of sexy maid Nancy. The play had a 1975 Broadway revival.

Set in the 1880s in a dark and dreary house, with a plot point second floor and attic, we are wrong to assume what Gaslight means. In an era prior to Edison at the beginning of the play, ordered by Mark H. Dold (Mr. Manningham) the master of the house, the maid lights the gaslights.

A banner in the lobby spells out that there is another definition of the term gaslight.

More precisely gaslighting, a verb, is a form of intimidation or psychological abuse, sometimes called Ambient Abuse where false information is presented to the victim, making them doubt their own memory, perception and quite often, their sanity. It is an increasing frequency of systematically withholding factual information from, and/or providing false information to, the victim - having the gradual effect of making them anxious, confused, and less able to trust their own memory and perception.

The agenda of the villain, superbly played by Dold, is systematically to drive his wife (Kim Stauffer) mad.  The intent is to stash her in a loony bin the better for him to pursue a life of dissolution including carnal knowledge of the eager and willing coquette of a maid Nancy ( the delicious, rompy tart played with zest by Ali Rose Dachis).

When Mrs. Manningham aspires to do some things herself,  like putting fresh coal on the fire, he likes to pull on the rope summoning their two servants. After all he huffs, we are paying them $25 a year. Servants, he adds, are by definition hired to serve.

They are, as it ensues, being paid not with our or his but actually her money. He married her with the singular intent of buying the house they live in. When a former copper, Detective Rough (Kevin O’Rourke), appears during one of the master’s routine nights on the town (or in the attic), we learn that the house was a crime scene some 15 years ago.

The old lady had her throat slashed, he says pointing to a spot on the floor. The house was ransacked looking for her treasure of rubies. They are presumed still hidden which is why with a new name and identity the detective believes that Mr. Manningham is indeed the killer.

There is a lot of exposition, particularly in the first act, which bogs down a now dated play. We have to sit through all the tricks and torments of his strategy to drive her mad. Things go missing and this becomes a tedious game. There are threats and accusations.

Maids are called in and made to kiss the Bible to swear that they did not steal or misplace the missing objects. Mrs. Manningham also kisses the book seemingly wearing out the cover to no avail.

The challenge for Stauffer is to convey the gradual slide into doubt, insecurity, panic and desperation. This she does quite well but her costume, hair and makeup make her overly drab and too obviously no completion for the perky maid Nancy.

It is all to plausible that having married for money he has lost interest in his wife and more intent on being served by the hired help.

He also enjoys dining out alone. In a masterful scene Dold waltzes solo round the parlor evoking a gay night on the town.

While true to the period her dress, designed by Beth Goldberg, overdoes the unflattering image of an ordinary house wife. The colors are awful with a boring accent of lace. The dress is draped over her in  a messy lump. It offers not a hint of her figure with the accent of a poorly crafted bustle. There are other wardrobe glitches. Dressed as a dandy the master’s pants lack cuffs while those of the detective have them.

True to the gaslight theme the lighting by Scott Pinkney is dim and grisaille. There were a few missed cues particularly during the plot point of a mysterious man in the attic who siphons off gas dimming the parlor. It is a way of knowing when there is an "intruder" or to time when the master will return home.

The other maid, matronly Elizabeth (Peggy Pharr Wilson), as we have come to expect from this member of the company, makes the most of a small role. She is loyal to the lady of the house in contrast to the other maid who is anxious to hop into the master’s bed.

The second act is dominated by O’Rourke. He stomps about convincing Mrs. Manningham that she is of sound mind but married to a murderer and scoundrel. To allay her anxiety he insists on sharing liquid courage in the form of a pint of Scotch whiskey.

With more bluster than clever  finesse and reasoning the director, Louisa Proska, might have better shaped his over the top exuberance. In a battle of wits this lout doesn't seem smart enough to catch a thief. The aspects of hiding him in the closet and the reactions of Elizabeth his accomplice edge toward melodrama and farce. Is it the right director's decision to play the final scenes for laughs?

There is a lot of crash-bang, slamming about as the plot thickens and then comes to a riotous end. In the dénouement and reversal the evil Mr. Manningham is brought low while his wife prevails. She conveys the notion of don’t go mad get even.

We  are left with an ersatz happy ending. An after image, however, flashes on the extent to which women, then and now, are dominated and abused by their husbands. The insidious horror of endemic spousal abuse is more disturbingly resonant than his failed plot to get rid of her.

Extra reading on the topic of women and hysteria/madness is the 1892 proto feminist novel The Yellow Wallpaper by Charlotte Perkins Gilman.