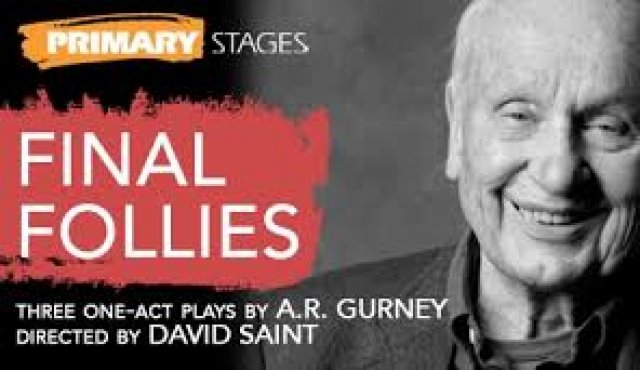 Final Follies at the Cherry Lane

The second one act, The Rape of Bunny Stuntz.  does not come off quite as well, although Deborah Rush's performance as Bunny is superb, At a meeting gathered for people who seek self improvement, perhaps a 12-step meeting or Scientology, Bunny, the leader of the meeting,  has lost the key to her organizational box.  She thinks it is at home.

Outside a man in a Red (is red Gurney's Go signal?) Impala with a black leather jacket is waving a key.  Bunny's assistant (Betsy Aidem) goes out and returns repeatedly, asking Bunny to come out and speak with the man in the Red Impala.  Piter Marek rushes up and down the theaters aisles to round up the troops and gather them in the basement while Bunny resolves her organizational problems.

Attendees we only imagine descend to the basement of the church where they find beer flowing and disco recordings at the ready.  The party begins as the search for the key continues.  It's a fun romp, and shapeless.  Performances throughout are terrific.  The director does as much as he can with the material.

Rush is an actress of great emotional and gestural variety.  She goes for broke.  We are transfixed as we should be.

The third play, The Love Course, is a tour de force.  Two English professors have been jointly teaching a course on love in literature.  It is a splendid notion.  For they become as involved in the love scenes as Plato, Shakespeare, Gustave Flaubert and Emily Bronte did.  Obsessive love, adultery. Yet. in the end, pedestrian marriage may save the day.

One student in particular (Sally) appreciates the duet.  Played by Rachel Hicks, who was also delightful in Final Follies, she tries to work out the professors struggles with love and her own.  Director David Saint makes the most of these delicious moments.

Gurney's plays are more than a way to celebrate the waning Wasp.  They are finely wrought works full of laughter and feeling.  At the Cherry Lane through October 21.