Kiss and Cry at ArtsEmerson 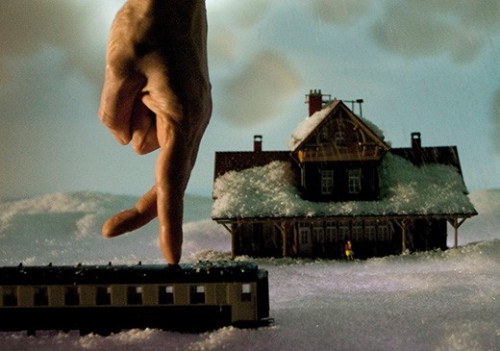 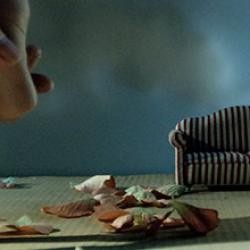 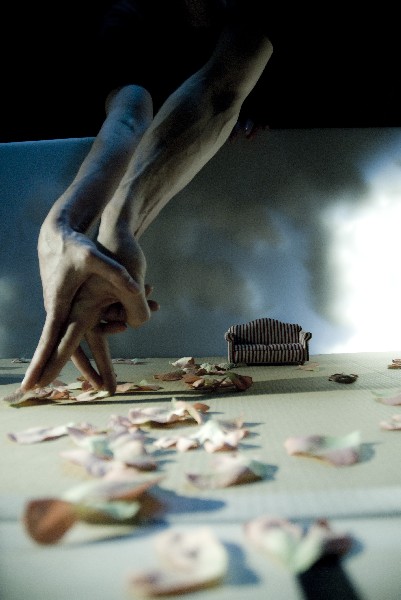 During the Winter Olympics, after the skaters perform they sit on a bench in the Kiss and Cry area awaiting their scores. There are tears and enormous bunches of roses.

There is indeed a brief figure skating element in the 90 minute, multi-media piece created by the team of Michele Anne de May, Jaco van Dormael and their Belgian team of collaborators.

But the metaphor more broadly applies to a single woman seated by the tracks in front of a railroad station marked Boston.

Elderly by the end of the evocative and mesmerizing narrative she is reflecting on the five great loves of her life. Signified by the fingers on her hand.

The first of these “It lasted for 13 seconds. She was 13 on the delayed 18:15 train, coach number four, second class with 26 passengers on board including the 14-year -old boy.”

Her life and loves are told in the most remarkable manner.

On every level this was an astonishing, unique and inventive performance. For lack of a better word it was a dance. But one performed by trained dancers in a ballet choreographed entirely for hands. Well, actually in one sequence, rather comically and awkwardly one of her lovers was depicted by a foot. Then in the fading moments of a stunning evening of illusions and fantasy the lovers themselves appear ever so briefly.

Entering the theatre we viewed a stage cluttered with areas of mini sets. They were assembled around toy trains and tiny dolls house figures. We could clearly view the performers and the apparatus of their piece including video cameras wheeled about from set to set.

Above the actions they videoed were projected as a live “movie” on a screen above.

One might ask why not just film it once as an animated feature?  That is indeed a possibility but here it became all the more stunning and absorbing as a live performance and dance.

Perhaps you might assume that any actor might execute this finger ballet. But we were able to observe how in a series of pas de deux the hands were just the final visible aspect of an entire body in movement. Also, only a skilled dancer could execute finger and hand movements that exquisitely expressed all of the disciplined movements of a well trained and compelling dancer.

In addition to the ‘dancers’ there were uncanny special effects with complex changes of weather, seasons and topography.

At mid point the house light partly came up then, after an interval, subsided. It seemed important at all times that we were aware of the performers and their intricate movement and tricks which resulted in what was projected.

There was a feeling of a very complete theatrical experience and one not easily replicated.

The company with arms embracing took their sustained applause and rousing standing ovation as a single unit. There were no individual stars in a truly ensemble work. It was the kind of rare experience that you never forget.