An Iliad at Shakespeare & Company 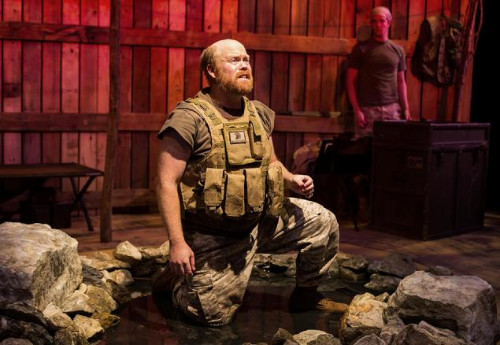 For 90 grueling minutes, Michael F. Toomey, a 16-year member of the company often assigned comic supporting roles, steps into the spotlight with a magnificent virtuoso performance in the riveting one act play An Iliad by Lisa Peterson and Denis O’Hare.

In a far more elaborate set for the generally minimalist second stage, designed by Jonathan Epstein who also directed, we hear the roar of a giant jet above. Toomey, as The Poet, is seeking shelter in the desert somewhere in the Middle East. He has set up camp next to a small pool of water. When an outer garment of a para-military costume designed by Govane Lohbauer is removed we see the word Press stenciled on his back.

Through the course of an absorbing evening of superb theatre Toomey will elide through a variety of personas. At times, in Greek, he is a wandering poet earning daily bread by reciting the epic poem The Iliad. Touring to convey this saga was a part of the oral tradition of troubadours. The norm was to tell the story of the Trojan War over several days. Depending upon the audience it was at times shortened.

As a reporter and war correspondent he slips into another role as commentator on the war at hand. He delineates a wider theme of all wars and man’s basic impulse for combat and atrocities. During the sack of Troy he vividly describes a Greek soldier tossing an infant son of the slain Hector from the high walls.

What does it take for a solider to slaughter a child?

We come to understand why the play by Lisa Peterson and Denis O’Hare is An Iliad and not The Iliad. The tale of ancient Troy is a trope to convey an exploration of the morality and mayhem of all wars. As the emotional apogee of the drama Toomey delivers a daunting litany of virtually all of the major wars that have spanned the centuries from ancient Troy (1,200 to 800 B.C.) down to the current conflict and slaughter in Syria.

Those planes that open the play may well be Russian and American jets on bombing runs over Syrian. Once again we are toying with yet another global war.

With Gilgamesh,The Iliad and The Odyssey, as well as the Old Testament we have the foundation of Western literature. While the Bible is widely viewed as literal truth, however fantastical, the other works are understood as oral traditions that were eventually fixed with the emergence of written text.

Gilgamesh, for example, has come down to us through a number of cuneiform tablets. Scholars and poets have filled in the gaps. It is likely that the blind poet Homer, if he existed, was the scribe or signifier of a group of scribes, that eventually recorded the tale in Ancient Greek.

As a work of literature The Odyssey is more advanced. Odysseus is able to think and learn and is not just buffeted by the whims of the gods.

If in a battle a Greek warrior kills his opponent it is because Athena, who loves him, guides the arrow or spear to its target. The daily tide of battle is determined by the gods who take sides. Athena is the primary champion of the Greeks while Aphrodite, who helped Paris to seduce and abduct Helen the wife of king Menelaus, supports the Trojans.

For nine years they have been deadlocked.

When Toomey focuses on the telling of this epic we are entirely absorbed. Having read and taught The Iliad and The Odyssey over decades the vivid story came vibrantly alive for me.

Particularly compelling was his enacting of the man-to-man combat of mighty Achilles seeking to destroy Hector for slaying and disgracing his friend Patroclus. The telling of the savagery of Achilles, that mightiest of all warriors, is fierce and palpable.

His hubris, which led to his demise, was unprecedented. The arrow of the cowardly lover, Paris, was guided by Aphrodite to his heel. It was his one point of vulnerability.

Poignantly King Priam, with a chariot loaded with tribute, comes to beg for the corpse of his son. It is perhaps the most emotional passage in all of The Iliad. The story of Priam is a powerful metaphor for all parents who have lost their children to war.

Was there a Troy?

That’s what Heinrich Schliemann, more an adventurer and treasure hunter than archaeologist, was determined to discover. He found seven Troys layered one upon the other. He destroyed the site and dug a trench through the mound. He unearthed what he described as the treasure of Priam.

He dressed his Greek wife Sophia in the jewels of Helen of Troy. It caused sensational media coverage. As a German he took the treasure back to Berlin. There it disappeared during the end of WWII. Decades later it has resurfaced in Russia.

The superb performance of Toomey was richly enhanced by The Musician, Gregory Boover. It evoked much of the simplicity and poetry of the troubadours who would have sung their epic verse.

While the full story of The Iliad was told, toward the end, Toomey provided capsules of the final deception. Hinting at the story of the Trojan Horse he addresses us in an aside. You know that story he tells us. Indeed we do.

Unlike An Iliad the full telling of The Iliad would have spanned far beyond the attention span of a modern audience.

After nine years of conflict the gods decided to end it. Zeus, who mostly was impartial, looked the other way as Athena supported the ultimate deception. In a matter of hours the war came to an end.

But spun off The Odyssey as well as the Roman epic The Aeneid.

Too often we have heard of the war to end all wars.

The ultimate and undeniable message of this magnificent play is that one war leads to another and another. It never ends.

There are millions upon millions of Priams mourning the death of their warrior sons.

The indelible and primal truth of The Iliad continues to resonate.