The Philadelphia In Magnificent Form 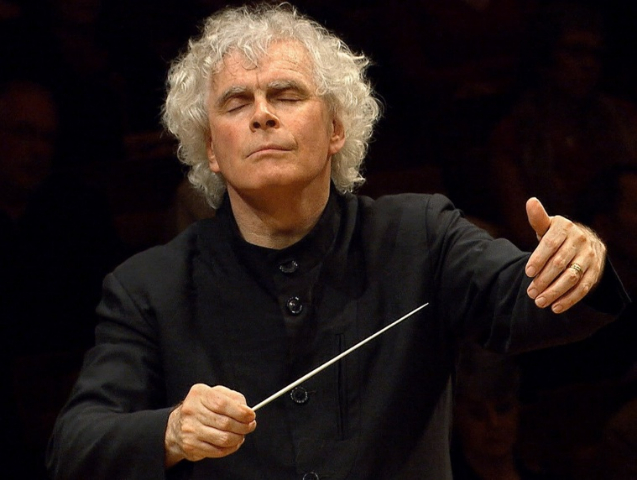 Sir Simon Rattle, conductor of the Berliner Philharmonika, joined forces with an A list orchestra, the Philadelphia, to perform Gustav Mahler's Sixth Symphony. In an interview Rattle says, Mahler "was my road to Damascus moment. This is something that has lived with me all my life. And it is something that will never stop being a challenge and a discovery."

With this performance of the symphony that Mahler and Rattle are suited. Mahler makes the case for the virtues of symphonic music in the sheer scope of his composition. There are more instruments and more emotion elicited by rhythm, dissonance, and key change.

What Rattle makes clear in his conducting is the marvelous webbing of phrases in and between instrumental ensembles. Here 'the conductor's voice' makes clear a composer's interest and reveals what has previously been hidden.

All of this contributed to the thrills offered up in Carnegie Hall. Around 100 instrumentalists are on stage. The sound ranged from almost inaudible whispers to giant clashes cracking Carnegie's ceiling. The tuba and bass drum were at times indistinguishable groans of despair.

Rattle quickly puts an end to any questions about the order of the movements. He points out that only musicological dishonesty raised the issue to begin with. Mahler conducted the Symphony three times and in each performance he followed the same order: first movement, slower movement, scherzo and final movement. Rattle took this course.

Mahler was against the open program notion of the new German school characterized by Liszt and Strauss. He did not want listeners to construct their inner world without the composer’s influence. The tragic connotations in the Sixth Symphony most likely came from listeners.

Several "themes" emerged through time and a "rereading" of the score by several conductors and critiques of the Sixth Symphony. This is the first symphony after his First that is truly an instrumental work.

Rattle wanted to become a conductor after hearing Mahler’s Second Symphony live and this may explain his tremendous emotional connection to the Sixth. Rattle resolved and unlocked every hidden thought Mahler composed, every inner struggle and the revisions Mahler made after the first publishing of the score.

The A minor opening march theme is an electrically charged Allegro energetico, which is followed and contrasted by a lyrical idea called Alma’s theme. Forceful and determined, the sound is beautifully rounded with soft edges. There is a clean intonation in this very intense fortissimo.

Rattle is breaking new ground by acknowledging and telling the story of every single thought throughout the theme variations. The Philadelphia Orchestra was secure in creating a fugue-like form in these variations, masterfully balanced in sound and expression, and gradually creating the awaited dramatic energy and outcome.

The orchestra’s dialogue is elegant and precise. The change in sound from a few solo instruments to orchestra tutti makes the audience feel as if they were sitting in between, in that motion/ wave, the transition from illusive coast to coast, until we reach the final ground.

Again we hear a vision of nature as the cowbells sound. They suggest Mahler’s oasis, untouched nature, pure, with no human presence. We are far away from the anguish, the desperate struggle and the grotesqueries of life.

The dramatic symphonic giant is released in the finale and reaches a transcendent climax. We are left with one foot in the world as we hear a thump from the "other side".

Proto feminists have always been interested in Alma Gropius Mahler Werfel. Mahler's wife described this symphony as based on very personal moments in the composer's life. He preferred to let us simply hear the symphony without all the biographical baggage. In Rattle and the Philadelphia's performance, the glories of the music were so evident and overwhelming that is was easy to take the composer on his terms. In fact the performance was both revealing and moving.