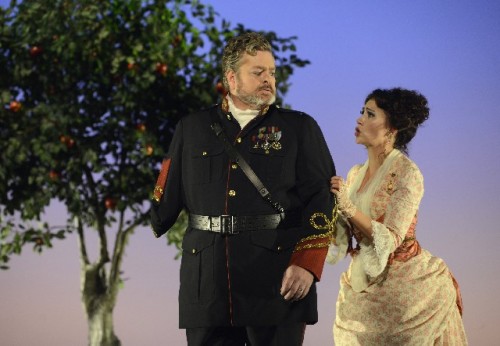 Weston Hurt as Giorgio Germont with Anya Matanovic as Violetta during their second act duet, a highlight of the evening 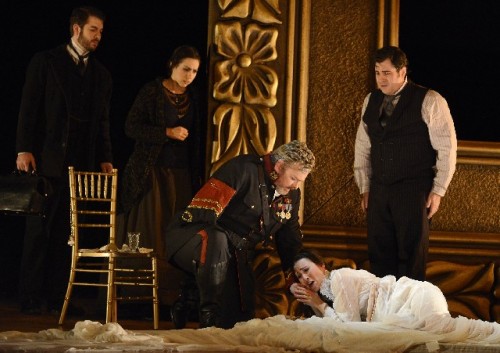 The Boston Lyric Opera opened its 2014/15 season with an effective production of the perennially popular Verdi classic “La Traviata,” the story of a fallen woman torn between true love and a life of pleasure, who is condemned to death no matter what choice she makes by the tubercle bacillus lurking in her lungs.

The sets and costumes were handsome, creating together beautiful and memorable stage pictures for each of the opera’s four scenes. The stage direction was for the most part sensitive to the subtleties of the story. The orchestra played with fullness of tone, bringing out the dance rhythms that recur throughout the work, minimizing the oom-pah-pah. The three central characters sang well, demonstrating full understanding of their roles, acting in a believably realistic manner, not content to be just singers on a stage singing some of the most beautiful vocal music ever composed.

It was perhaps the best production I’ve seen the BLO put on during the four years I’ve been covering opera in Boston for Berkshire Fine Arts.

But - and there is almost always a “but” in opera - as effective as it was, it was largely unaffecting. I’ve never seen such an emotionally cool interpretation of the opera. This is one of the great 19th century love stories, produced continuously around the world since its 1853 premiere. It should tear at your heart and bring tears to your eyes. In the best production of the work I’ve seen, which starred Beverly Sills under Sarah Caldwell’s direction, at the conclusion, when Violetta dies in the arms of the arms of the man she loves, you could hear sobbing throughout the theater. I’d wager that at the end of this production, as admirable as it was, there was not a wet eye in the house.

The production’s coolness, however, did carry a perhaps unintended advantage. Since you weren’t swept up emotionally in the opera’s melodrama, you could look at it more objectively. And what became apparent was what a miracle of compositional concision it is. Verdi didn’t pad his story with irrelevancies or waste a line of music. Even the two dances in the third act party scene made sense dramatically. One great solo, duet or ensemble, each one specific to the character or situation, followed one another without break. I don’t think I’ve ever appreciated Verdi’s artistry so much. Of course, I think, along with recognizing his skill as a composer, he would have liked you to be moved by the heartbreaking story he set to music.

The work opens on a party scene at the home of Violetta Valéry, one of Paris’ leading courtesans. Violetta is based on a real woman, Marie Duplessis, who was transformed by one of her suitors, the younger Alexandre Dumas, into the mythic character Marguerite Gautier, known in several adaptations as Camille for the flower she always wore. (Her salons were attended by Franz Liszt, Honoré de Balzac and Théophile Gautier and other cultural luminaries as well as Dumas.) She died of tuberculosis at age 23.

In the first act, the stage is dominated by a huge gold-framed landscape painting. (It would have been nice if set designer Julia Noulin-Mérat had chosen a 19th century French painting, perhaps something from the Barbizon School, rather than what appeared to be an American Hudson River School work.) Gold ballroom chairs are scattered around the stage. Mike Inwood’s sensitive lighting design makes it look like a 19th century space lit by gaslights. Everyone is well behaved. Violetta wears white, as costume designer Jacob A. Climer dresses her throughout all four scenes, suggesting that despite her profession she is essentially pure. Although everyone is drinking champagne, this must be the most decorous salon run by a courtesan in 19th century Paris. Even in the famous Brindisi or drinking song (“Libiamo”), you don’t get the sense that the evening is going to end in anything more than a kiss on the cheek.

Into the well-mannered crowd enters Alfredo Germont, a young man from the provinces, who professes his all-consuming love for Violetta. He tries to convince her to leave with him, abandoning her sinful life to start anew. In a rapturous solo Alfredo speaks of his love as “the pulse of the entire world, mysterious, unattainable, the torment and delight of my heart” (“Di quell’amor”), to which Violetta replies that she can’t love him the way he requires. But when he leaves, alone, she reflects in one of opera’s greatest numbers (“Ah fors’è lui che l’anima”) that perhaps his love is true, that he might be the man to save her, but then she changes abruptly to an even greater number (“Sempre libera”), in which she celebrates her independent life dedicated to pleasure.

This first act is first among equals. In it, the Violetta of the evening, Anya Matanovic, displayed a decent lyric soprano, a little thin but seldom forced, even through the vocal registers. She demonstrated an easy coloratura, producing a little trill when required. In a nice touch, whether the singer’s or stage director Chas Rader-Shieber’s invention, she begins to show the effects of the champagne she has been drinking in the “Sempre libera” reprise. Matanovic, who was singing Violetta for the first time, inhabited the role to a point, but she never made you feel the conflict within her between love and the life she knows and her fear of the death that is soon to be her fate.

As Alfredo, the classic hot-headed youth in love for the first time, Michael Wade Lee sang with a smallish but sweet tenor that was able to rise in volume when required. Lee, who was also singing Alfredo for the first time, demonstrated skill in Italianate lyricism, and he sang with clear enunciation of the Italian text. But like his love object, he went through all the moves correctly but left you cold.

In Act II, we see that Violetta has given in to Alfredo’s entreaties and is living with him at a country estate. Unknown to him, however, she is selling her jewels to pay for their living expenses. When he finds out, he impetuously runs off to Paris to raise money to pay her back; his father Giorgio shows up unexpectedly. The set is simple to the point of minimalist. A green expanse, suggesting grass, covers the stage and a small apple tree stands at the back. Some in the audience felt that it was ugly, but I thought it stripped away superfluities to focus attention on the exchanges between, first, Violetta and the elder Germont, second, between Violetta and Alfredo, and, finally, between father and son.

The elder Germont wears a heavily medaled military uniform and displays an arm lost below the elbow from perhaps the Franco-Prussian War. (The action of the opera has been moved from mid-19th century to its end in order to demonstrate “the ruthless rise of the moneyed capitalist society” that transformed the courtesan, a figure of culture, into a prostitute, as BLO Artistic Advisor John Conklin puts it in a program note.) He has come to beg Violetta to give up his son so that his young daughter can marry the man she loves, which would be impossible if Alfredo and Violetta continue to cohabit. Their scene together was the emotional highlight of the evening.

The elder Germont was sung by veteran baritone Weston Hurt, and he knew what he was doing. Ironically, unlike the lovers, Hurt was a stiff actor, standing and facing the audience like an old-time opera star in “Pura siccome un angelo” (Pure as an angel), the touching aria in which he describes his young daughter. But the drama was in his voice; he was able to express vocally all the feelings the role carries. The extended scene between him and Violetta features a number of emotional turn-arounds. He came expecting to find an immoral, venal woman preying on his son; instead he finds a sympathetic woman who is sacrificing her financial security to pay his son’s way. But he persists in begging her to make even a greater sacrifice: to give up Alfredo to free his family from the shame their liaison has created. She resists, but finally gives in, knowing that by renouncing her love she will only hasten her death. Matanovic gave her most emotionally resonant performance during her scenes with Hurt, the depth of his feeling evidently helping her to express an emotional current within herself.

The final two acts move swiftly to Violetta’s foreordained fate. (As composed, the opera has three acts, the second act divided into two scenes, but the BLO production breaks the second act in half, creating in effect four acts.)

Act III is set during a party given by Flora (a fine if restrained Chelsea Basler), a courtesan who is Violetta’s best friend. The two parties could not be more different. Flora, who wears an eye patch on one eye, is hosting a bacchanal, an orgy. A fat man in a skimpy t-shirt and apparently nothing else sits at the huge round table that fills the stage. Two scantily clad women hurry across the stage on all fours like dogs, dragging an admirer by a pair of leashes. Two men wear pig’s head masks. A number of women wear corsets; some of their male counterparts are shirtless, one of them wearing suspenders and rouged nipples like Alan Cumming in “Cabaret.” According to the program notes, the contrast between Violetta’s and Flora’s parties is supposed to represent the changing social order from one dominated by courtesans to a bourgeois world of trophy wives, leaving the former courtesan class to function like modern prostitutes. Perhaps that’s historically accurate, but since Violetta has been gone for only three months, it is unlikely that such a change could happen so quickly. More to the point of the drama, the contrast underscores Violetta’s inherent purity – again, she is wearing white - compared with Flora’s depravity. Setting Flora’s party as something out of Weimar Germany is the potentially most controversial directorial decision of the opera, but I think it works.

Into this dimly lit demi-monde Alfredo enters, determined to win at the gambling table enough money to pay back Violetta’s debt. He does, wiping out Violetta’s escort, the Baron Douphol (a fine David Kravitz). The act concludes with Alfredo throwing the money in Violetta’s face, repaying his debt, but revealing the cruelty at the heart of his love.

The final act takes place in Violetta’s formerly grand salon. The painting has disappeared from the enormous frame, probably sold off to pay bills. She wears a long white nightgown, resting on the floor on a pad, a bad decision I think - even in her reduced circumstances, she would have a bed. She is attended by her faithful maid Annina (an effective Rachel Hauge). She has received a letter from the elder Germont telling her that he has told Alfredo of her sacrifice and that they are coming to be with her. They arrive just in time for Alfredo and Violetta to have one more duet together, a fantasy of them leaving their beloved Paris together to rest (“Parigi, o cara”), and then she dies. From its whisper of an overture, the music in this final scene is of the most ethereal quality. Conductor Arthur Fagen and the excellent BLO orchestra captured the mood perfectly. Everything is hushed. The audience should feel the imminence of death. The tears should be streaming down cheeks as soon as Alfredo arrives if not as soon as the curtain rises. Matanovic and Lee gave it their all, but alas, it wasn’t e